: "The title "Aleksandar of Yugoslavia" also has other uses."Infobox Yugoslavian Royalty|majesty
name = Alexander I
title = King of Yugoslavia; "prev." King of Serbs, Croats, and Slovenes 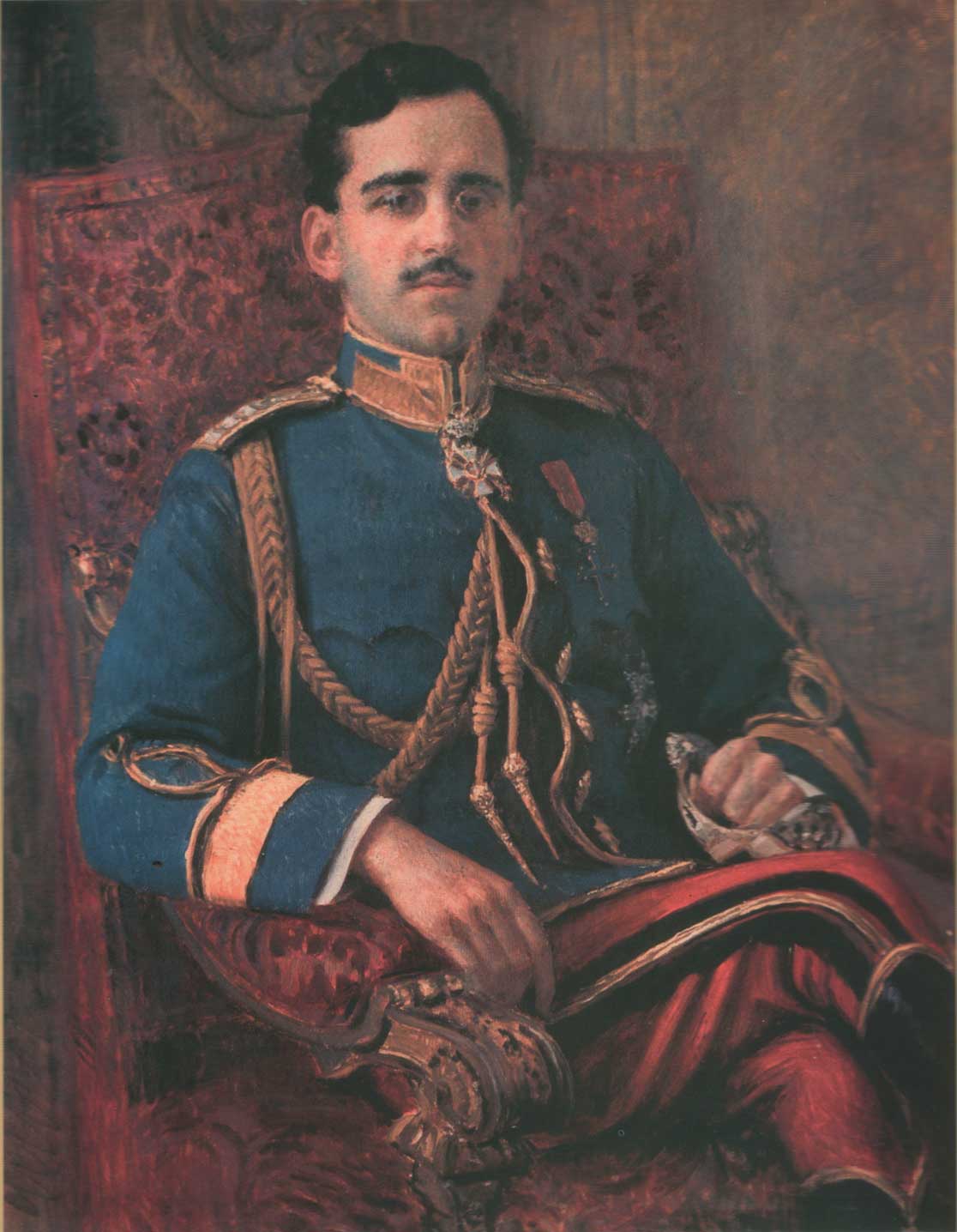 Alexander Karadjordjevic was born in in in December 1888. His father was King and his mother the former Princess , a daughter of King . In on 8 June 1922 he married HRH Princess Maria of Romania, who was a daughter of Queen Maria, the Queen Consort of Romania. They had three sons: Crown Prince Peter, Princes Tomislav and Andrej.

He spent his childhood in , and was educated in . In 1910 he nearly died from stomach typhus and left with stomach problems for rest of his life. He continued his schooling at the Corps de pages imperial in Saint Petersburg, , but had to quit due to his brother`s renounciation, and then in Belgrade. Prince Alexander was not the first in line for the throne but his elder brother, Crown Prince George (Đorđe) was considered unstable by most political forces in Serbia and after two notable scandals (one of which occurred in 1909 when he kicked his servant, who consequently died), Prince George was forced to renounce his claim to the throne.

Balkan Wars and World War I

In the in 1912, as commander of the First Army, Crown Prince Alexander fought victorious battles in Kumanovo and Bitola, and later in 1913, during the , the . In the aftermath of the Second Balkan War Prince Alexander took sides in the complicated power struggle over how Macedonia should be administered. In this Alexander bested Col. Dragutin Dimitrijević or "Apis" and in the wake of this Alexander's father, King Peter, agreed to hand over royal powers to his son. On 24 June 1914 Alexander became of Serbia.

At the outbreak of he was the nominal supreme commander of the Serbian army - true command was in hands of Chief of Staff of Supreme Headquarters - position held by Stepa Stepanović (during the mobilisation), (1914-1915), Petar Bojović (1916-1917) and Živojin Mišić (1918). The Serbian army distinguished itself in the battles at Cer and at the (the ) in 1914 , scoring victories against the invading Austro-Hungarian forces and evicting them from the country.

In 1915 the Serbian army with the aged King Peter and Crown Prince Alexander suffered many losses being attacked from all directions by the alliance of Germany, Austria-Hungary and Bulgaria. It withdrew through the gorges of Montenegro and northern Albania to the Greek island of , where it was reorganized. After the army was regrouped and reinforced, it achieved a decisive victory on the Macedonian Front, at Kajmakcalan. The Serbian army carried out a major part in the final Allied breakthrough in the autumn of 1918.Infobox Monarch styles

On 1 December 1918, in a prearranged set piece, Alexander, as Regent, received a delegation of the People's Council of the , an address was read out by one of the delegation, and Alexander made an address in acceptance. This was considered to the birth of the .

In 1921, on the death of his father, Alexander inherited the throne of the , which from its inception was colloquially known both in the Kingdom and the rest of Europe alike as Yugoslavia.

On 6 January 1929, in response to the political crisis triggered by the murder of Stjepan Radić, King Alexander abolished the Constitution, prorogued the Parliament and introduced a personal dictatorship (the so-called "January 6 Dictatorship", "Šestojanuarska diktatura"). He also changed the name of the country to Kingdom of Yugoslavia and changed the internal divisions from the 33 to nine new "s" on 3 October.

In 1931, Alexander decreed a new Constitution which transferred executive power to the King. Elections were to be by universal male suffrage. The provision for a secret ballot was dropped and pressure on public employees to vote for the governing party was to be a feature of all elections held under Alexander's constitution. Furthermore, the King would appoint half the upper house directly, and legislation could become law with the approval of one of the houses alone if it were also approved by the King.

On account of the deaths of three members of his family on a Tuesday, Alexander refused to undertake any public functions on that day. On Tuesday 9 October 1934, however, he had no choice, as he was arriving in to start a to the Third French Republic, to strengthen the two countries' alliance in the . While being driven in a car through the streets along with French , a gunman, , stepped from the street and shot the King and the chauffeur. The Minister was accidentally shot by a French policeman and died later.It was one of the first s captured on film; the shooting occurred straight in front of the cameraman, who was only feet away at the time. The cameraman captured not merely the assassination but the immediate aftermath; the body of the chauffeur (who had been killed instantly) became jammed against the brakes of the car, allowing the cameraman to continue filming from within inches of the King for a number of minutes afterwards.

The assassin, &mdash; driver of the leader of the (IMRO) and an experienced marksman &mdash; was cut down by the sword of a mounted French policeman, then beaten by the crowd. By the time he was removed from the scene, he was already dead. The IMRO was a Bulgarian political organization that fought for annexing to Bulgaria using terrorist means. The organization worked in alliance with the Croatian fascist group led by , under the secret sponsorship of Italian dictator .Fact|date=March 2008

The film record of Alexander I's assassination remains one of the most historic pieces of newsreel in existence, [ [http://www.youtube.com/watch?v=RfxL67Uqp6E Documentary film The Assassination of the Yugoslavian king Alexander in 1934] en icon] [ [http://www.youtube.com/watch?v=SrruCOZwxKA&mode=related&search= Documentary film The Assassination and the Funeral of the Yugoslavian king Alexander in 1934] bg icon] alongside the film of Tsar 's , the funerals of Queen and Emperor , and the assassination of .

King Alexander I was buried in the Memorial Church of St. George, which had been built by his father. As his son Peter II was still a minor, Alexander's first cousin Prince took the regency of the Kingdom of Yugoslavia.