Peter I of Serbia

Peter I of Serbia 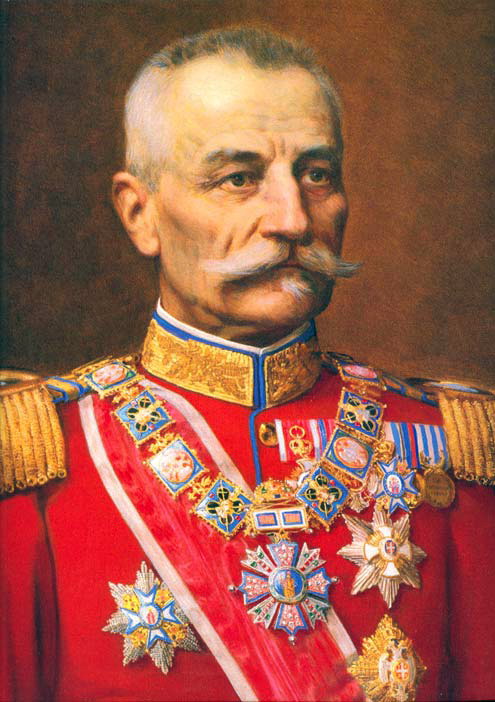 Peter I (: Petar I Karađorđević/Петар I Карађорђевић) ( – ), also known as King Peter the Liberator, was from 1903 to 1918 after which he became the first King of Serbs, Croats and Slovenes, which from the very beginning was colloquially called Yugoslavia within the kingdom and in the rest of Europe.

The young noble spent much of his exile in , where he received an education and even participated in the of 1871 as a French Army officer. On one occasion during the war, after being separated from his unit, he narrowly avoided capture by swimming across the near-frozen . During the Serb uprising against in 1876 in Bosnia and in , Peter took on the name Mrkonjic, a slavicized version of his last name, and joined the freedom fighters. He had to leave the region at the insistence of then-prince , the ruler of , who saw Peter as a rival and feared his popularity among the Serbian people. He married Princess Zorka of Montenegro, daughter of King Nicholas I, in 1883. They had five children: Princess Helen in 1884, Princess Milena in 1886, Prince George in 1887, Prince Alexander in 1888 and Prince Andrew in 1890. Princess Milena died at the age of one in 1887, and Prince Andrew, the last child, died in childbirth along with his mother.

Peter returned to Serbia in 1903, when a military removed King Alexander from the throne. Peter was crowned King of Serbia on .

The Western-educated King attempted to liberalise Serbia with the goal of creating a Western-style , even translating 's "" into Serbian.

Peter chose to "retire" due to ill health following the which, from a Serb perspective, were a great success. Executive power passed to his son Alexander.

The King was relatively inactive during the , although he did occasionally visit trenches to check up on his troops. One memorable visit in 1915 involved Peter, by then 71, picking up a rifle and shooting at enemy soldiers. Following Serbia's military defeat to the forces of Austro-Hungary Peter led the army and civilian refugees through the mountains to the sea on a 'Calvary known to few peoples'. (R. Wolfson "Years of Change. European History 1890-1945")

His last public appearance was on , when he was proclaimed King of Serbs, Croats and Slovenes. King Peter I died in Belgrade in 1921 at the age of 77.

As his eldest son, Prince George was King Peter's presumed successor. This changed in 1909, when he kicked a servant to death in a fit of rage, after which the Crown Prince was forced to renounce his claim to the throne in favour of his brother Alexander.

King Peter I is remembered for his modesty, attributed to his military background. He was immensely popular throughout his reign and remains one of the Western Balkans's most popular leaders. He is considered to be the founding father of Yugoslavia (this name, colloquial, but very widely used even in European maps during his day, became official in 1929).

His children were influential in European affairs as adults. His son, King Alexander, joined Yugoslavia with the West and helped foster the nascent Yugoslav national identity. His daughter, Princess Helen, married who was killed in the Revolution.

In , a street off the is named after him.