Alexander II Karadjordjevic, Crown Prince of Yugoslavia (Serbo-Croatian: Aleksandar Karađorđević, Cyrillic: Александар Карађорђевић; born 17 July 1945), is the last crown prince of the former Kingdom of Yugoslavia and the head of the House of Karadjordjevic. Alexander is the only child of former King Peter II of Yugoslavia and Princess Alexandra of Greece and Denmark. He prefers to be known as "Crown Prince Alexander", the title he legally held in Democratic Federal Yugoslavia, a communist dictatorship, for the first four-and-a-half months of his life,[1] from 17 July 1945 (his birth) up-until his father's deposition by the communist single party Yugoslav Parliament in late November of the same year.

With the formation of a communist government and the subsequent disintegration of the state of Yugoslavia, Alexander is now a proponent of re-creating a constitutional monarchy in Serbia.[2]

As with many other European monarchs during World War II, King Peter II left his country to establish a government-in-exile.[3] He left Yugoslavia in April 1941 and arrived in London in June 1941. The Royal Yugoslav Armed Forces capitulated.

After the Tehran Conference, the Allies shifted support from royalist Chetniks to communist Partisans.[4] Commenting on the event and what happened to his father, Crown Prince Alexander II said, "He [Peter II] was too straight. He could not believe that his allies – the mighty American democracy and his relatives and friends in London – could do him in. But that's precisely what happened."[5] In June 1944 Ivan Šubašić, the Royalist prime minister, and Josip Broz (Tito), the Partisan leader, signed an agreement that was an attempt to merge the royal and communist governments.

On 29 November 1943, AVNOJ (formed by the Partisans) declared themselves the sovereign government of Yugoslavia and announced that they would take away all legal rights from the Royal government. On 10 August 1945, less than a month after Karađorđević's birth, AVNOJ named the country Democratic Federal Yugoslavia. On 29 November 1945, the country was declared a republic and changed its name to People's Federal Republic of Yugoslavia.[6]

In 1947, Alexander's family [1] was deprived of Yugoslavian citizenship and all family property was confiscated [2].

“Based upon the Decree of the Presidency of the Presidium of the National Assembly of the People's Federal Republic of Yugoslavia nr. 392 from 8 March 1947, with which the Government of PFRY was entrusted the fulfillment of the decision about the removal of the citizenship of the PFRY and confiscation of the property of the members of the Karadjordjevic family, the Government of PFRY brings the following ORDER:

By the Decree of the Presidency of the Presidium of the National Assembly of the People's Federal Republic of Yugoslavia nr. 392 from 8 March 1947 (Official Gazette nr. 64 from 1 August 1947), the citizenship of PFRY is being taken away from the members of the Karadjordjevic family and their entire property is being confiscated”.[7]

Alexander was born in Suite 212 of Claridge's Hotel in Brook Street, London. The British Government temporarily ceded sovereignty over the suite in which the birth occurred to Yugoslavia so that the prince would be born in Yugoslav territory.[8]

His godparents were King George VI and Princess Elizabeth, now Elizabeth II.[9] He was the only child of King Peter II and Queen Alexandra and the only grandchild of Princess Aspasia of Greece. Through his maternal grandmother, Alexander is also a relative of Ileana, the current Duchess of Chartres.

His parents were relatively unable to take care of him, due to their various health and financial problems, so Alexander was raised by his maternal grandmother. He was educated at Institut Le Rosey, Culver Military Academy, Gordonstoun, Millfield and Mons Officer Cadet School, Aldershot.

On 1 July 1972 at Villamanrique de la Condesa, near Seville, Spain, he married Princess Maria da Gloria of Orléans Bragança. They had three sons, Hereditary Prince Peter and fraternal twins Princes Philip and Alexander. By marrying a Roman Catholic, Alexander lost his place in line of succession to the British Throne, which he had held as a descendant of Queen Victoria through her second son Alfred. Alexander is also descended from Queen Victoria's eldest daughter Victoria.[10] His sons are in the line of British succession, in 94th, 95th and 96th place (as of 8 January 2009).

Alexander and Maria da Gloria divorced in 1985. Crown Prince Alexander married for the second time, Katherine Clairy Batis, the daughter of Robert Batis and his wife, Anna Dosti, civilly on 20 September 1985, and religiously the following day, at St. Sava Serbian Orthodox Church, Notting Hill, London. Since their marriage, she is known as Katherine, Crown Princess of Yugoslavia, as per the royal family's website. 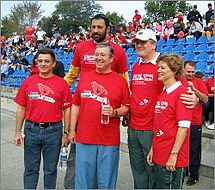 Alexander first came to Yugoslavia in 1991. He actively worked with the democratic opposition against the regime of Slobodan Milošević and moved to Yugoslavia after Slobodan Milošević was deposed in 2000. In March 2001 Yugoslavian citizenship was finally restored to him by the government and the property seized from his family, including royal palaces, was returned for residential purposes with property ownership to be decided by parliament at the some later date.[citation needed]

Alexander is a proponent of re-creating a constitutional monarchy in Serbia and sees himself as the rightful king. He believes that monarchy could give Serbia "stability, continuity and unity".[11]

Many members of political parties and organizations support a constitutional parliamentary monarchy in Serbia. The Serbian Orthodox Church has openly supported the restoration of the monarchy.[12][13] The assassinated former Serbian Prime Minister Zoran Đinđić was often seen in the company of the prince and his family, supporting their campaigns and projects, although his Democratic Party never publicly embraced monarchy. It seems no party is ready to energetically push the issue of constitutional monarchy either because the country has more pressing problems, or because they don't want to drive another wedge into the already fragmented electorate.

Crown Prince Alexander II has vowed to stay out of politics and has so far fulfilled this promise. He and Crown Princess Katherine spend considerable time associated with humanitarian work.

The Crown Prince however has increasingly participated in public functions alongside the leaders of Serbia, the former Yugoslav republics and members of the diplomatic corps. On 11 May 2006 he hosted a reception at the Royal Palace for delegates attending a summit on Serbia and Montenegro. The reception was attended by the Governor of the National Bank of Serbia, as well as ambassadors and diplomats from Slovenia, Poland, Brazil, Japan, United States and Austria. He later delivered a keynote speech in front of prime ministers Vojislav Koštunica and Milo Đukanović. In the speech he spoke of prospective Serbian membership of the European Union. He told delegates[14]:

Following Montenegro's successful independence referendum on 21 May 2006, the re-creation of the Serbian monarchy did find its way into daily political debate. A monarchist proposal for the new Serbian constitution has been published alongside other proposals. The document approved in October 2006 is a republican one. The Serbian people have not had a chance to vote on the system of government.

The Crown Prince raised the issue of a royal restoration in the immediate aftermath of the vote. In a press release issued on the 24 May 2006 he stated[15]:

Returning the remains of King Peter II to Serbia

He has not yet set a date for returning his father, but may do so for spring of 2012. The plan has caused controversy among a minority of Serbian-Americans since Peter II according to them personally chose St. Sava Serbian Orthodox Monastery as his final resting place.[17] Most of King Peter II's ancestors are buried in the Royal Mausoleum at Oplenac.[18] King Peter II's mother, Queen Marie of Yugoslavia is buried at the Royal Burial Ground, Frogmore near Windsor Castle, Windsor, United Kingdom. Crown Prince Alexander would like to see his paternal grandmother buried next to King Alexander I. The Crown Prince also would like Queen Alexandra of Yugoslavia, his mother, who is buried in Tatoi (Greece) to be buried eventually next King Peter II in Oplenac.