The title of this article contains the following characters: đ and ć. Where they are unavailable or not desired, the name may be represented as Zoran Djindjic.

Đinđić was a founder of the modern Democratic Party[1] and became its president in 1994.[2] During the 1990s, he was one of the leaders of the opposition to the regime of Slobodan Milošević, and became Prime Minister of Serbia in 2001[2] after the overthrow of Milošević. As Prime minister, he advocated pro-democratic reforms and European integrations of Serbia.[3] He was assassinated in 2003 by members of the Serbian organised crime.[4][5]

Đinđić was born in Bosanski Šamac, Bosnia and Herzegovina, FPR Yugoslavia where his father was stationed as an officer of the Yugoslav People's Army (JNA). His paternal side hailed from Toplica in southern Serbia.[citation needed] His mother Mila Dušanić, a housewife, raised him and his elder sister Gordana; the family moved according to his father's jobs. Ten years of Zoran's childhood were spent in the town of Travnik.[6] Eventually, the family moved to capital Belgrade, after his mother had gained a post there. Đinđić attended Ninth Belgrade Gymnasium, subsequently enrolling in the University of Belgrade Faculty of Philosophy, graduating in 1974. During his university days he developed an interest in politics. After being convicted by the communist regime and through Party-controlled media for his role in his attempt to organize an independent political movement of Yugoslav students, Đinđić emigrated to West Germany[7] thanks to the intervention of former German Chancellor Willy Brandt, who persuaded authorities to let Đinđić come to Germany instead of serving his sentence in Yugoslavia. He continued his studies with professor Jürgen Habermas in Frankfurt.

In Germany, Đinđić obtained a Ph.D. in philosophy from the University of Konstanz in 1979. He became proficient in German. Later, while serving as Serbian prime minister, he also mastered English.

In 1989, Đinđić returned to SFR Yugoslavia to take a teaching post at the University of Novi Sad, and on 11 December 1989 together with other Serb intellectuals and pro-democracy activists he founded the liberal Democratic Party (DS) based on the similarly conceptualized Democratic Party that existed in the Kingdom of Yugoslavia. He became the party's Executive Board Chairman in 1990, and got elected to the Parliament of Serbia the same year. In January 1994 he replaced Dragoljub Mićunović as President of the Democratic Party.[2]

After a massive series of public protests over election fraud perpetrated by the central government under Slobodan Milošević during the winter 1996–1997, Đinđić became Mayor of Belgrade, the first non-communist mayor to hold that post after the Second World War. United only by their political enemy, the coalition "Zajedno" (Together) with Vuk Drašković's SPO and Vesna Pešić's GSS collapsed only four months after their victory. Đinđić was voted out of his position as Belgrade mayor by the SPO, SPS and SRS.

Đinđić and his party boycotted the 1997 Serbian presidential and parliamentary elections, as did others in the "democratic bloc" including Vojislav Koštunica's Democratic Party of Serbia. This caused the Socialists and Radicals to sweep most of the seats, leaving the third largest portion to Vuk Drašković's SPO. The boycott helped forced a second set of elections when the second round was ruled to have had insufficient turnout. Serbian law at the time mandated at least 50% turnout for a president to be elected. In this case, Vojislav Šešelj won the second round against the Socialists' Zoran Lilić; when the election was re-done, Šešelj lost to the Socialists' Milan Milutinović. This caused Šešelj to allege electoral fraud and lead protests against the government. He changed his mind however when the Kosovo crisis began in early 1998, and his Radicals joined the government as a coalition partner. When Vuk Drašković joined the Yugoslav government in early 1999, this left Đinđić as Serbia's main opposition leader as NATO's war began against Yugoslavia.

After former secret policeman, anti-Milošević publisher and journalist Slavko Ćuruvija was murdered on Orthodox Easter during NATO bombing of Yugoslavia, Đinđić sought safety and fled to temporary exile in Montenegro, allegedly because he was next on the assassination list of then-President Slobodan Milošević's secret service[citation needed]. In September 1999, Đinđić was named by Time magazine as one of the most important politicians at the beginning of the 21st century. Photos of his handshake with Bill Clinton at time of the bombings have been used to portray him as a traitor, as well as by the opposition to show his and accordingly Belgrade's possible international recognition. Upon his return to the country in July 1999, Đinđić was charged with endangering state security in a trial that was closed to the public and subsequently found out to be rigged[citation needed].

A series of mysterious assassinations included the shooting of Yugoslav Defence Minister Pavle Bulatović on 7 February 2000 in a restaurant. Serbian Radical Party leader Vojislav Šešelj maintained during his testimony at the Slobodan Milošević trial that this murder was carried as a prelude to the successful hijacking of the Montenegrin People's Party in October 2000 by Predrag Bulatović, who successfully reversed the parliamentary majority won by Milošević and his allies, moving his party in alliance with Đinđić's Democratic Opposition of Serbia (DOS). In April, JAT chairman and Yugoslav United Left member Žika Petrović was gunned down as he was walking his dog.[8] In late August, former Serbian President Ivan Stambolić disappeared; he had been murdered on Fruška Gora mountain by members of Serbia's Special Operations Unit. Đinđić and his allies openly accused Milošević of these events, claiming that he had either ordered them or was no longer able to maintain control and should therefore step down.

Đinđić played a prominent role in the September 2000 presidential elections in the Federal Republic of Yugoslavia and in the 5th October uprising that overthrew the Milošević regime. While the nationalist Koštunica headlined the effort in October, Đinđić lead the broad-based 19-party Democratic Opposition of Serbia coalition to its victory in Serbian elections of December 2000. He became the Prime Minister of Serbia on 25 January 2001.

In August 2001, after meeting with Koštunica's cabinet, former Serbian State Security officer Momir Gavrilović was murdered. Koštunica claimed that Gavrilović was briefing his cabinet about connections of some members of Serbian government with organized crime. This caused Koštunica and his 45 DSS members of parliament to withdraw from DOS and the government. Đinđić attempted to expel the DSS members from parliament,[10] referring to the existence of imperative mandate that places all deputies under the control of the party elected to parliament. Meanwhile, Koštunica and his party openly accused Đinđić of involvement with organised crime.[11]

Đinđić was received favorably by Western nations. His meetings with Western leaders George W. Bush, Tony Blair, Jacques Chirac and others strongly indicated that the West supported his politics. Đinđić had constant disagreements with his ex-coalition partner and then-Yugoslav federal president Vojislav Koštunica, who was his biggest political rival in Serbia itself. His earlier close relationship with Montenegrin president Milo Đukanović had also cooled because of Đukanović's aspiration for an independent Montenegro state.

Despite Koštunica's accusations of Đinđić being close to organised crime, the latter always insisted that he was determined to clean Serbia, and created the "Special Tribunal" with a witness protection program. This alarmed organized crime leaders who were intertwined with elements of the Serbian secret police that were still loyal to ousted President Slobodan Milošević. That was a main reason for the following events. At the order of former commander of Special Operations Unit of Yugoslavia's secret police, Milorad "Legija" Ulemek, Đinđić was assassinated by Ulemek's soldier Zvezdan Jovanović in Belgrade on 12 March 2003. Jovanović shot him from the building across from the main Serbian government building at 12:23 PM, hitting him once in the chest. The high-power bullet of a Heckler & Koch G3 assault rifle penetrated his heart and killed him almost instantly.[12] He was rushed to a hospital where he was treated, but pronounced dead one hour later. Ulemek was blamed as the mastermind of the crime. He was also one of the leading persons in the Zemun clan, a leading organized crime group in Serbia. He was later prosecuted and convicted of being involved in some of the mysterious assassinations and assassination attempts that marked Yugoslavia in the months before Đinđić took power.

Nataša Mićić, then acting President of Serbia, declared a state of emergency immediately. Zoran Živković was elected by the Serbian Democratic Party as Đinđić's successor.

On 23 May 2007, twelve men were convicted for assassination of Zoran Đinđić.[13] Among the convicted defendants was Ulemek, who, during the four years preceding the murder of Zoran Đinđić, had travelled to Switzerland, Austria, the Republic of Macedonia, Greece, Singapore and Croatia using a fraudulent passport that had been one of a batch of blank passports stolen from the Croatian Consulate in Mostar, Bosnia and Herzegovina in 1999. Ulemek, along with Zvezdan Jovanović, was charged with being the ringleader of the assassination plot carried out on 12 March 2003, when Zoran Đinđić was fatally shot. Three of twelve men convicted are still on the run and remain the subject of INTERPOL Red notices. Specialist officers in INTERPOL’s Fugitive Investigative Support Unit continue to liaise with and assist member countries in the investigation of various leads for the following individuals wanted by Serbian authorities: Milan Jurišić, Ninoslav Konstantinović and Vladimir Milisavljević.[14][15][16][17]

He published four books and more than a hundred articles and essays on various themes.

Đinđić was married to Ružica, with whom he had a daughter and a son, Jovana and Luka, both minors at the time of his death. 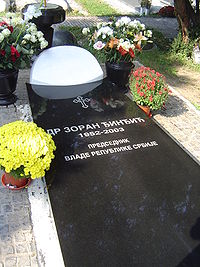 Tomb of Đinđić on the Alley of Meritorious Citizens, New Cemetery in Belgrade

His state procession and funeral, held on 15 March 2003, was attended by hundreds of thousands of citizens and by foreign delegations. Đinđić's death represented a political and moral tragedy to many Serbs who saw in him a statesman of hope who offered peaceful coexistence with neighboring nations, integration to Europe and the rest of the world, economic prosperity and a brighter future. He appealed to people in Serbia whose goal is for their country to join the West, to join the European Union, and to become "normal Europeans" with normal lives.

Đinđić and Koštunica realised that they both needed each other for their respective goals. Koštunica believed that Serbia needed to join the West so that it could keep Kosovo and so that Republika Srpska could be maintained. Vojislav Koštunica, who served as Đinđić's political opponent and critic during his premiership, acknowledged his work two years later with these words:

Zoran Đinđić was the first to take this difficult task to lead government in very unstable times. Probably his energy and commitment made it possible for things to move forward. It is one thing to watch it from the sidelines and it is completely different to be a part of it. I understand that now when I am Prime Minister and watch things a bit differently. He was very important for the whole process.[citation needed]

Following his death, a small but influential movement emerged throughout Serbia and the Serbian diaspora organized around a short documentary about Zoran Đinđić (created by Belgrade director Aleksandar Mandić). The documentary – "Ako Srbija Stane" (If Serbia stops)[18] – was a collection of edited speeches given by Đinđić on a speaking tour in Serbia shortly before his death. A movement called "Kapiraj" created a network of students and other young people who were committed to copying and distributing the documentary free of charge. This campaign was known by the slogan "Kapiraj-kopiraj"[19] (which means "Catch on and Copy" in Serbian) and its purpose was to have a "non-party initiative to have as many people as possible hear Đinđić's message, to put an end to the fleeing from responsibility, and to do the most for oneself so that Serbia does not stop."