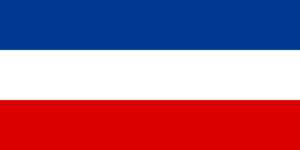 coat = Coat of arms of the Federal Republic of Yugoslavia 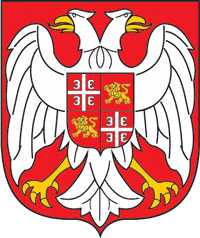 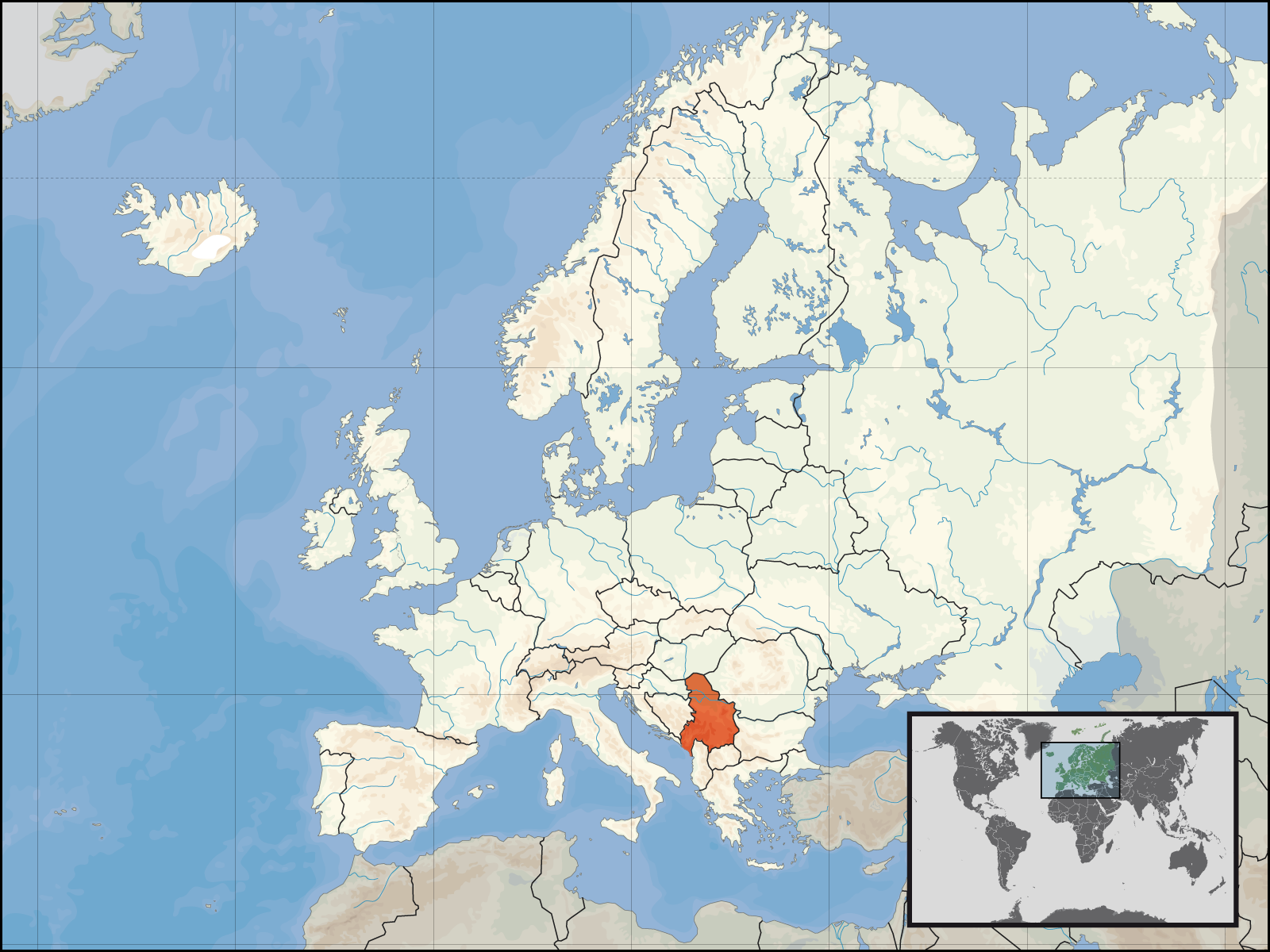 The Federal Republic of Yugoslavia ( _sr. Савезна Република Југославија / "Savezna Republika Jugoslavija") or FRY was a federal state consisting of the republics of Serbia and Montenegro from the former (SFRY), created after the other four republics broke away from Yugoslavia amid rising ethnic tensions. The state existed from 1992 to 2003, when it was reconstituted as a State Union of which itself was dissolved three years later, when a referendum for independence in Montenegro resulted in the majority of Montenegrins supporting separation from Serbia. This resulted in both and becoming independent countries.

With the separation of other republics from the former SFRY, the FRY was far more ethnically homogeneous. The state's two main ethnic groups, and , were almost ethnically and culturally identical, though nationalist strains amongst Montenegrins claim that they constitute an ethnic derivative of their own, while others, especially those who support union with Serbia claim that Montenegrins are a sub-group of Serbs. Ethnic minorities included , , , and other smaller groups. Ethnic tensions and conflict between Serbs and ethnic Albanians in the province of was a serious and ongoing problem in the FRY throughout its existence.

The state was not recognized as the official successor to the SFRY and remained unrecognized until 2000. From 1992 to 2000, countries like the United States referred to the FRY as "Serbia and Montenegro" and was often called by its "Serbia" due to Serbia having dominant influence in the affairs of the FRY, especially under who, during his term as Serbian President, appeared to have more influence over FRY affairs than the Yugoslav president. Opponents of Milošević and opponents of the rise of Serb nationalism under his leadership, claimed the FRY under Milošević was a "".

With the collapse of the in 1991 and 1992, only Serbia and Montenegro agreed to maintain the Yugoslav state, and established a new constitution for a new Yugoslavia in 1992. With the collapse of communism across Eastern Europe, the new state followed the wave of change, and did not revive Communist party structure (which had already been dissolved in 1990). It abandoned communist symbolism: the was removed from the national flag, and the communist coat of arms was replaced the with a double-headed eagle with the arms of both Serbia and Montenegro within it. Further changes included the subsequent rebranding of the police, from "Milicija" (Милиција) as they were hitherto known (lit. "militia") to "Policija" (Полиција); the two republics would each have their respective force. The new state also abandoned the collective presidency of the former SFRY and replaced it with the system consisting of a single president, who would be democratically elected, as well as a democratically elected parliament.

The FRY and the Yugoslav Wars

The FRY was suspended from a number of international institutions. This was due to the ongoing during the 1990s, which had prevented agreement being reached on the disposition of federal assets and liabilities, particularly the national debt. The Government of Yugoslavia supported Croatian and Bosnian Serbs in the wars from 1991 to 1995. Because of that, the country was under economical and political sanctions, which resulted in economical disaster that forced thousands of its young citizens to emigrate from the country.

In 1995, Serbian President Slobodan Milošević represented the FRY and Bosnian Serbs at peace talks in , , which negotiated the end of war in Bosnia with the .

In 1996, Montenegro severed economic ties with and formed a new and adopted the as its currency. Subsequent governments of Montenegro carried out pro-independence policies, and political tensions with Serbia simmered despite political changes in . Also, separatist Albanian paramilitaries began steady escalation of violence in 1996. The question whether the Federal Yugoslav state would continue to exist became a very serious issue to the government.

With Milošević's second and last legal term as Serbian President expiring in 1997, he ran for, and was elected President of Yugoslavia in 1997. Upon taking office, Milošević gained direct control of the Yugoslav military and security forces, and directed them to engage Kosovo separatists. The conflict escalated from 1996 to 1999 and became a civil war, known as the .

From March 1999, the (NATO) under the leadership of the United States waged war on Yugoslavia. NATO suspected that the Yugoslav government was committing genocide on ethnic Albanians in Kosovo. This suspicion was based on the presence of Serbian ultranationalist and former paramilitary being Prime Minister of Yugoslavia; a fear of a repeat of atrocities similar to those committed by Serb forces in Bosnia; and suspicion of Milošević's influence in the previous war atrocities. NATO began an air campaign called against Yugoslav military forces and positions and suspected Serbian paramilitaries. The NATO campaign came under severe criticism for its attacks and many inaccurate bombings across Yugoslavia which killed many civilians. The Yugoslav government claimed the NATO attacks were a terror campaign against the country while NATO defended its actions as being legal. The air attacks against Belgrade by NATO were the first attacks on the city since . Some of the worst massacres against civilian Albanians by Serbian forces occurred after NATO started its bombing of Yugoslavia. , [ [http://americanradioworks.publicradio.org/features/kosovo/cuska/cuska_frameset.html Justice for Kosovo - Massacre at Cuska ] ] , [ [http://www.cbc.ca/news/background/balkans/crimesandcourage.html CBC News Indepth: Balkans ] ] [ [http://news.bbc.co.uk/hi/english/static/inside_kosovo/velika_krusa.stm BBC News | Inside Kosovo | Velika Krusa ] ] were some of the massacres committed by the Serbian police and paramilitaries during the war. NATO promised to end its bombings of Yugoslavia, when Milošević agreed to end the Yugoslav campaign in Kosovo and a return Kosovo's autonomy. After an array of bombings, Milošević submitted and agreed to end Yugoslavia's anti-separatist campaign in Kosovo and allowed NATO forces to occupy Kosovo.

In June 1999, after the NATO bombings ended, NATO and other troops, entered the province and organized with the controversial Albanian separatist (KLA) paramilitaries, to maintain order. NATO's decision to cooperate with the was seen by Serbs as a pro-separatist stand on Kosovo. The KLA committed a number of atrocities during the Kosovo War. Before the handover of power, some 300,000 Kosovars, mostly Serbs, left province, many had been expelled. The number of Serbs in Kosovo dropped drastically as Serbs fled Kosovo, fearing persecution by the KLA which had integrated into the Kosovo security force called KFOR. Despite the controversy, the United Nations proceeded to created a mandate in Kosovo, in which the province technically remained a part of Serbia (or the FRY as it was then), but was completely autonomous. The status of Kosovo was now greater than it had been between 1974 and 1990 when it was at its strongest; the province followed Montenegro in rejecting the Yugoslav/Serbian Dinar in place of the international currencies, and went even further: Kosovo's parliament created new car registration plates for its citizens, unlike Montenegro which continues to use the old FYR type licence plates two years after independence. Kosovo was sanctioned to deploy its own law enforcement, its own government, whilst all Yugoslav security forces (ie. the military, police, militias and paramilitaries) were repelled from entering the region, breeching conditions which did allow a presence of Belgrade forces within Kosovo to protect objects of interest to the Serbs and the various other nationalities (such as the Orthodox monasteries, and the Catholic churches used by Kosovo's ethnic Croats). The U.N. mandate would remain in place for the full duration of the FYR and beyond; it continues to guarantee Kosovo's independence today.

Under the FRY, the old collective presidency of the SFRY was dissolved and a single president was elected. The status of leadership of the Federal Yugoslav president was unstable with no president lasting more than four years in office. The first president from 1992 to 1993 was , a former communist during and later one of the writers of the controversial . Despite being head of the country, Ćosić was forced out of office in 1993 due to his opposition to Serbian President Milosevic. Ćosić was replaced by who served from 1993 to 1997, and then followed by Milosevic becoming Yugoslav President in 1997 after his last legal term as Serbian president ended in 1997. The presidential election in 2000 was accused of being the result of vote fraud. Yugoslav citizens took to the streets and engaged in riots in Belgrade demanding that Milosevic be removed from power. Shortly afterward Milosevic resigned and took over as Yugoslav president and remained president until the FRY's dissolution in 2003.

The FRY suffered significantly economically due to the loss of previous territories of the SFRY to the seceding states and due to mismanagement of the economy, and an extended period of economic sanctions. In the early 1990s, the FRY suffered from of the Yugoslav dinar. Damage to Yugoslavia's infrastructure and industry caused by the left the economy only half the size it was in 1990. Since the ousting of former Federal Yugoslav President in October 2000, the (DOS) coalition government has implemented stabilization measures and embarked on an aggressive market reform program. After renewing its membership in the in December 2000, Yugoslavia continued to reintegrate into the international community by rejoining the (IBRD) and the (EBRD).

The smaller republic of severed its economy from federal control and from Serbia during the Milošević era. Since then, the two republics had separate central banks, different currencies - Montenegro adopted the , while Serbia used the Serbian dinar as official currency.

The complexity of the FRY's political relationships, slow progress in privatisation, and stagnation in the European economy were detrimental to the economy. Arrangements with the IMF, especially requirements for fiscal discipline, were an important element in policy formation. Severe unemployment was a key political economic problem. Corruption also presented a major problem, with a large and a high degree of criminal involvement in the formal economy.