The origin of this rifle can be traced back to the final years of World War II when Mauser engineers at the Light Weapon Development Group (Abteilung 37) at Oberndorf am Neckar designed the MKb Gerät 06 (Maschinenkarabiner Gerät 06 or "machine carbine device 06") prototype assault rifle chambered for the intermediate 7.92x33mm Kurz cartridge, first with the Gerät 06 model using a roller-locked short recoil mechanism originally adapted from the MG 42 machine gun but with a fixed barrel and conventional gas-actuated piston rod.[2] It was realized that with careful attention to the mechanical ratios, the gas system could be omitted.[3] The resultant weapon, the Gerät 06H (the "H" suffix is an abbreviation for halbverriegelt or "half-locked") was assigned the designation StG 45(M) (Sturmgewehr 45(M) or assault rifle) but was not produced in any significant numbers and the war ended before the first production rifles were completed.[4]

The CEAM Modèle 1950, a French effort to put the StG 45(M) concept into mass production. Chambered in .30 Carbine

The German technicians involved in developing the StG 45(M) were taken to work in France at CEAM (Centre d'Etudes et d'Armement de Mulhouse). The StG 45(M) mechanism was modified by Ludwig Vorgrimler and Theodor Löffler at the Mulhouse facility between 1946 and 1949. Three versions were made, chambered in .30 Carbine, 7.92x33mm Kurz as well as the experimental 7.65x35mm French short cartridge developed by Cartoucherie de Valence in 1948. A 7.5x38mm cartridge using a partial aluminium bullet was abandoned in 1947. Löffler's design, designated the Carabine Mitrailleuse Modèle 1950, was retained for trials among 12 different prototypes designed by CEAM, MAC, and MAS. Engaged in the Indochina War and being the second NATO contributor, France canceled the adoption of these new weapons for financial reasons.

In 1950, Vorgrimler moved to Spain where he created the LV-50 rifle chambered for the Kurz cartridge and later, the proprietary 7.92x40mm CETME M53 round.[5] At this point, the rifle was renamed the Modelo 2. The Modelo 2 drew the attention of the West German Border Guards (Bundesgrenzschutz), who sought to re-equip the newly formed national defense forces. Not willing to accept a cartridge outside of the NATO specification, the Germans asked CETME to develop a 7.62x51mm version of the rifle. The resulting CETME Model A was chambered for the 7.62x51mm CETME cartridge which was identical in chamber dimensions but had a reduced-power load compared to the 7.62mm NATO round. Further development of the rifle with input from H&K produced the CETME Model B which received several modifications, including the ability to fire from a closed bolt in both semi-automatic and automatic firing modes, a new perforated sheet metal handguard (the folding bipod had been the foregrip in previous models), improved ergonomics and a slightly longer barrel with a 22 mm rifle grenade launcher guide. In 1958, this rifle was accepted into service with the Spanish Army as the Modelo 58, using the 7.62x51mm CETME round.

In 1956, the Bundesgrenzschutz canceled their planned procurement of the CETME rifles, adopting the Belgian-made FN FAL (G1) instead. However, the newly formed West German Army (Bundeswehr) now showed interest and soon purchased a number of CETME rifles (7.62x51mm NATO chambering) for further testing. The CETME, known as the Automatisches Gewehr G3 according to German nomenclature, competed successfully against the Swiss SIG SG 510 (G2) and the American AR-10 (G4) to replace the previously favored G1 rifle. In January 1959, the Bundeswehr officially adopted the CETME proposal. The West German government wanted the G3 rifle to be produced under license in Germany; purchase of the G1 had previously fallen through over FN's refusal to grant such a license. In the case of the G3, the Dutch firm Nederlandse Wapen en Munitiefabriek (NWM) held production and sales rights to the CETME design outside of Spain. To acquire production rights, the West German government offered NWM contracts to supply the Luftwaffe with 20 mm ammunition. Production of the G3 was then assigned to Rheinmetall and H&K. The latter company already had ties to CETME, and had worked to further optimize the CETME rifle for use with the full-power 7.62x51mm NATO cartridge (as opposed to the downloaded CETME variant). In 1969, Rheinmetall gave up production rights to the G3 in exchange for H&K's promise not to bid on MG 3 production. Later in 1977, the West German government ceded ownership of G3 production and sales rights exclusively to H&K.

A schematic of the G3 roller-delayed blowback mechanism

A Bundeswehr G3 fitted with a FERO-Z51 night vision optic 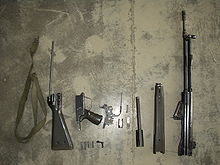 The G3A3 (A4) is a selective-fire automatic weapon that employs a roller-delayed blowback operating system. The two-piece bolt assembly consists of a breech (bolt head) and bolt carrier. The bolt is held in battery by two sliding cylindrical rollers that engage locking recesses in the barrel extension. The breech is opened when both rollers are compressed inward against camming surfaces driven by the rearward pressure of the expanding gases upon the bolt head. As the rollers move inward, recoil energy is transferred to the locking piece and bolt carrier which begin to withdraw while the bolt head slowly moves rearward in relation to the bolt carrier. As the bolt carrier clears the rollers, pressure in the bore drops to a safe level, the bolt head is caught by the bolt carrier and moves to the rear as one unit, continuing the operating cycle. The bolt also features an anti-bounce mechanism that prevents the bolt from bouncing off the barrel's breech surface. The spring-powered claw extractor is also contained inside the bolt while the lever ejector is located inside the trigger housing (actuated by the recoiling bolt).[5]

The rifle is hammer fired and has a trigger mechanism with a 3-position fire selector switch that is also the manual safety toggle that secures the weapon from accidentally discharging (fire selector in the “E” or “1” position – single fire mode ("Einzelfeuer"), “F” or “20” – automatic fire ("Feuerstoß"), “S” or “0” – weapon is safe ("Sicher"), trigger disabled mechanically). The weapon can be fitted with an optional 4-position safety/fire selector group illustrated with pictograms with an ambidextrous selector lever. The additional, fourth selector setting enables a 3-round burst mode of fire.[5]

The firearm was equipped with iron sights that consist of a rotary rear drum and hooded front post. The rear sight, mechanically adjustable for both windage and elevation, has an open notch used to fire up to 100 m and three apertures used for: 200, 300 and 400 m.[5] The receiver housing has recesses that work with HK clamp adapters used to mount day or night optics.

The rifled barrel (contains 4 right-hand grooves with a 305 mm twist rate) terminates with a slotted flash suppressor which can also be used to attach a bayonet or serve as an adapter for launching rifle grenades. From the G3A3 the barrel had polygonal rifling.[6] The barrel chamber is fluted, which assists in the initial extraction of a spent cartridge casing (since the breech is opened under very high barrel pressure).[5]

The G3A3 (A4) uses either steel (260 g) or aluminium (140 g) double-stacked straight box magazines, or a 50 round drum magazine. Original H&K drums are rare and command high prices, a reproduction is available at much less cost from Allied Armament. H&K developed a prototype plastic disposable magazine in the early 1960's, but it was not adopted as aluminum magazines were just as light and proved more durable, as well as easier to produce.

Standard accessories supplied with the rifle include: a detachable bipod (not included with rifles that have a perforated plastic handguard), sling, cleaning kit and a speed-loading device. Several types of bayonet are available for the G3, but with few exceptions they require an adapter to be inserted into the end of the cocking tube. The most common type features a 6 3/4 inch spear-point blade nearly identical with the M7 bayonet, but with a different grip because of its mounting above the barrel. The weapon can also mount a 40 mm HK79 under-barrel grenade launcher, blank firing adapter a straight blowback bolt (called a “PT” bolt, lacks rollers) used for firing 7.62x51mm ammunition with plastic bullets, a conversion kit used for training with .22 LR ammunition and a sound suppressor (that uses standard ammunition).

The G3 is a modular weapon system. Its butt-stock, fore-stock and pistol-grip/fire-control assembly may be changed at will in a variety of configurations (listed below). For example: by simply removing push pins the fixed butt-stock can be removed and replaced with a telescoping butt-stock. 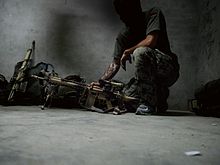 Apart from the G3A3 and G3A4 HK also built: the G3A3ZF (essentially a G3A3 with a Hensoldt 4x24 optical sight), the accurized G3SG/1 rifle (hand-selected G3A3’s, equipped with an improved trigger, Zeiss telescopic sight with a variable 1.5-6x magnification and a cheek riser) and the G3K carbine which uses an HK33 handguard and a short barrel (reduced in length to the base of the front sight post), that is too short for use with a bayonet or rifle grenades.[5]

The G3 served as a basis for many other weapons, among them: the PSG1 and MSG90 precision rifles, the HK11 and HK21 family of light machine guns, a semi-automatic version known as the HK91, a "sporterized" model called the SR9 (designed for the civilian market in countries where the HK91 would not qualify, primarily the US after the 1989 importation restrictions) and the MC51 carbine, produced by the UK firm FR Ordnance International Ltd. for special forces. The MC51 weighs 3.1 kg (6.8 lb), has a folded overall length of 625 mm (24.6 in), a barrel length of only 230 mm (9.1 in), which produces a muzzle velocity of approx. 690 m/s (2,263.8 ft/s) and a muzzle energy of 2215 J. The MC51 was allegedly manufactured for the British SAS and SBS, who required a compact but powerful weapon, for situations in which the stopping power and armor piercing capabilities of 9x19mm Parabellum round were inadequate. Only 50 weapons were produced, and all were reportedly shipped to the UK special forces. Most of them were soon replaced by the Heckler & Koch HK53 carbine. Another UK-based company called Imperial Defence Services Ltd. absorbed FR Ordnance and continues to market the MC51 standard variant.

Other military variants and derivatives 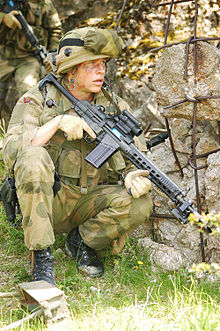 A Norwegian soldier takes cover behind a wall from simulated fire during a joint NATO exercise. The soldier is using the license-built AG3 model fitted with a Brügger & Thomet railed forend, vertical grip and Aimpoint red dot sight. 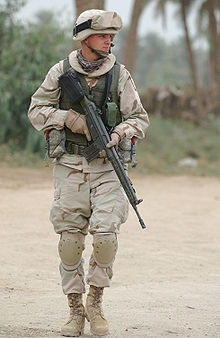 A Latvian soldier providing security for coalition forces with a Swedish-made Ak4 in Iraq, 2006. 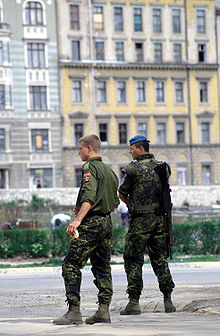 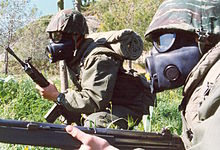 Soldiers from the Portuguese Army, 2nd Mechanical Battalion in Bosnia-Herzegovina with INDEP-made G3s

Guyanese soldiers on exercise with various Caribbean countries, as well as American and British forces. The soldier on the right is carrying a G3A3 with a blank-firing attachment on the muzzle 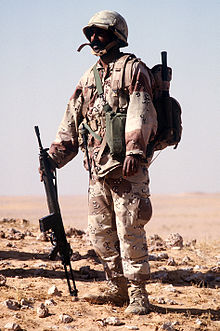 A Saudi infantryman with the G3A4 rifle