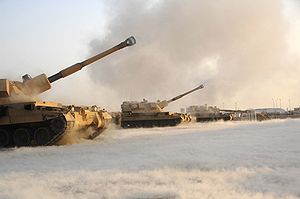 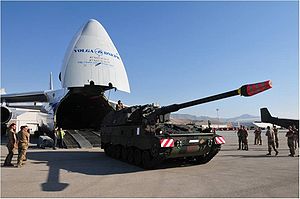 A Panzerhaubitze 2000 of the German Army arriving in Afghanistan

Self-propelled artillery (also called mobile artillery or locomotive artillery) vehicles are combat vehicles armed with artillery. Within the term are covered self-propelled guns (or howitzers) and rocket artillery. They are high mobility vehicles, usually based on caterpillar track carrying either a large howitzer or other field gun or alternatively a mortar or some form of rocket or missile launcher. They are usually used for long-range indirect bombardment support on the battlefield.

In the past, self-propelled artillery has included direct-fire vehicles such as assault guns and tank destroyers. These have been heavily armoured vehicles, the former providing close fire-support for infantry and the latter acting as specialized anti-tank vehicles.

Modern self-propelled artillery vehicles may superficially resemble tanks, but they are generally lightly armoured, too lightly to survive in direct-fire combat. However, they protect their crews against shrapnel and small arms and are therefore usually included as armoured fighting vehicles. Many are equipped with machine guns for defense against enemy infantry.

The key advantage of self-propelled over towed artillery is that it can be brought into action much faster. Before the towed artillery can be used, it has to stop, unlimber and set up the guns. To move position, the guns must be limbered up again and brought — usually towed — to the new location. By comparison self-propelled artillery can stop at a chosen location and begin firing almost immediately, then quickly move on to a new position. This ability is very useful in a mobile conflict and particularly on the advance.

Conversely, towed artillery was and remains cheaper to build and maintain. It is also lighter and can be taken to places that self-propelled guns cannot reach, so despite the advantages of the self-propelled artillery, towed guns remain in the arsenals of many modern armies. 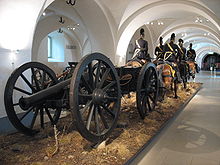 A lifesize model of a Swedish 1850s horse artillery team towing a light artillery piece at full gallop on display at the Army Museum in Stockholm, Sweden.

During the Thirty Year's War early 17th century experiments were made with early types of horse artillery. Batteries towed light field guns where most or all of the crew rode horses into battle. The gunners were trained to quickly dismount, deploy the guns and provide instant fire support to cavalry, and act as a flexible reserve. The Russian army organized small units of horse artillery that were distributed among their cavalry formations in the early 18th century. While not forming large batteries and employing only lighter 3- and 2-pound guns, they were still effective and inflicted serious losses to Prussian units in the Seven Years' War. This inspired Frederick the Great to organize the first regular horse artillery unit in 1759. Other nations quickly realized the capability of the new arm and by the start of French Revolutionary Wars in 1790s Austria, Hannover, Portugal, Russia, France, Great Britain and Sweden had all formed regular units of horse artillery. The arm was employed throughout the Napoleonic Wars and remained in use throughout the entire 19th century and into the first half of the 20th century, when advances in weapons technology finally made it obsolete.[1] 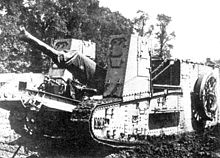 The British Gun Carrier Mark I was the first example of a self propelled gun, fielded in 1917 during World War I. It was based on the first tank, the British Mark I and carried a heavy field gun. The gun could either be fired from the vehicle, or removed and set up as normal. In effect the carrier replaced the use of a separate horse team or internal combustion engine powered artillery tractor, and allowed a new way for the gun to be used.

The next major advance can be seen in the Birch gun developed by the British for their motorised warfare experimental brigade (the Experimental Mechanized Force) after the end of the War. This mounted a field gun, capable of both the usual artillery trajectories and high angle anti-aircraft fire, on a tank style chassis. It was designed and built as part of a general approach to warfare where all arms, infantry and artillery included, would be able to operate over the same terrain as tanks. The Red Army also experimented with truck- and tank-mounted artillery, but produced none in quantity. 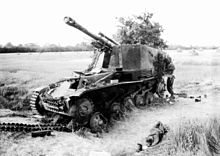 At the outbreak of World War II virtually all artillery was still being moved around by artillery tractors or horses. While the German Blitzkrieg doctrine called for combined-arms action, which required fire support for armoured units, during the invasion of Poland and France this was provided by the Luftwaffe using Stuka dive-bombers effectively acting as artillery. Conventional towed howitzers followed.

As the war progressed, most nations developed self-propelled artillery. Some early attempts were often no more than a field gun or anti-tank gun mounted on a truck - a technique known in the British Army as carrying portee. These were mobile, but lacked protection for the crew. The next step was to mount the guns on a tracked chassis (often that of an obsolete or superseded tank) and provide an armoured superstructure to protect the gun and its crew. Many of the early designs were improvised and the lessons learned led to better designs later in the war. For example, the first British design, "Bishop", carried the 25 pdr gun-howitzer, but in a mounting that severely limited the gun's performance. It was replaced by the more effective Sexton.

The Germans were particularly prolific with designs. They created many examples of lightly armored self-propelled anti-tank guns using captured French equipment (example Marder I), their own obsolete light tank chassis (Marder II), or ex-Czech chassis (Marder III). These led to better protected tank destroyers, built on medium tank chassis such as the Jagdpanzer IV and Jagdpanther. Some designs were based on existing chassis (such as the Brummbär), leftover chassis from cancelled programs (Elefant and Sturer Emil); others were converted from battle-damaged tanks (Sturmtiger).

The Soviets experimented with truck-and tank-based self-propelled weapons, producing a few Komsomoletz tractor-mounted 57-mm ZiS-2 guns early in the war. By 1943 they produced the SU-85, and by late 1944 the SU-100, which mounted powerful guns on modern chassis with full armour protection. These had the advantage of being relatively cheap to build and mounting a larger gun compared to the conventional tank they were derived from, but at the expense of flexibility.

Heavily armoured assault guns, were designed to provide direct-fire support to infantry in the face of enemy defenses. Although often similar to tank destroyers, they carried larger caliber guns with weaker anti-armor performance but capable of firing powerful HE projectiles. The German StuH 42 and the Soviet ISU-152 are good examples of this type of self-propelled artillery.

All major nations developed self-propelled artillery which would be able to provide indirect support while keeping pace with advancing armoured formations. These were usually lightly armoured vehicles with open-topped hull, US M7 Priest, British Sexton (25 pdr) and German Wespe and Hummel being typical examples. A different route was chosen by the Soviets, who didn't develop a specialized indirect fire vehicle, but following a tradition of dual-purpose towed artillery, built a series of versatile assault guns with indirect fire capabilities (example ISU-152). But probably the most important breakthrough was the development of the famous Soviet Katyusha self-propelled multiple rocket launchers which were unarmored trucks with a simple rocket rack on the back, a cheap and crushingly effective weapon.

After the end of World War II, the assault gun fell from use with a general trend towards a single heavy gun-equipped vehicle, the main battle tank. Self-propelled indirect-fire artillery remained important and continued to develop alongside the general purpose field gun. 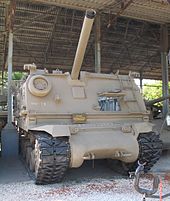 Many vehicles have used ancillary smoke mortars for local defense. Some vehicles are mortar carriers and carry a mortar as a primary weapon. Vehicles with a mortar as a primary weapon that is mounted to be fired within the vehicle include the U.S. M4 half-track. Tanks such as the Israeli Makmat on the M4 Sherman tank chassis have also mounted mortars.

Self-propelled artillery remains important in the equipment of many modern armies. It saw a significant role throughout the Cold War era conflicts and in the recent Gulf Wars.

Modern SP artillery is highly digitized with the ability to self survey firing positions using systems such as GPS and inertial navigation systems. This, in conjunction with digital fire control/ballistic computers and digital communications, allows individual guns to disperse over a wide area and still deliver rounds on target simultaneously with the other guns in their battery. 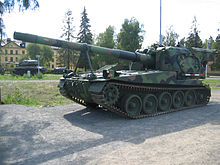 These capabilities also increase survivability many fold as modern SP artillery can displace and avoid counterbattery fire much more quickly and effectively and if desired more frequently than previously possible. In conjunction with modern logistic systems (where the SP gun's systems can track and report on ammunition consumption and levels) with similar navigation systems and palletized load dropping/lifting capabilities mean that the rapid displacement can occur without significant disruption to actually firing missions as it is possible for the ammunition to keep up with the guns.

A modern battery of six guns, each firing 43 kg projectiles with a burst firing speed of four rounds per minute, can deliver over a metric tonne of ordnance per minute for up to four minutes. This is an immense weight of fire which can be delivered with very high accuracy.

One example of the increased firepower provided by modern mobile howitzers is the latest version, the G6-52, of the 155 mm G6 howitzer. It can fire up to 6 rounds in quick succession which will land nearly simultaneously. This is achieved by firing the shells at different trajectories so that the first round has the longest flight time and the last round the shortest. The necessary rapid reloading is made possible by an automated ammunition feed system.[2]

Rockets have greater ranges and carry much more complex "shells" than guns since there is less of a restriction on size (calibre). The MLRS can be used to saturate a large area with sub-munitions.