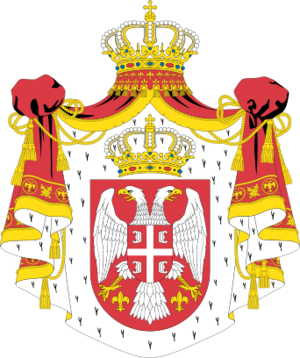 The Kingdom of Serbia (: Краљевина Србија, Serbian Latinica:"Kraljevina Srbija") was created when Prince Milan Obrenović, ruler of the Principality of Serbia, was crowned King. Congress of Berlin in 1878 recognized the borders of the . The Kingdom of Serbia was the legal predecessor of Yugoslavia which was formed after at the .

It fought several wars, including the of 1885, and the of 1912–13 (the in 1912–13, and the in 1913). It won the first Allied victory of in 1914, but in 1915 it was occupied by foreign troops due to a combined invasion by Austro-Hungarian, German, and Bulgarian troops. After the war's end, it united with the and the short lived to form the Kingdom of Serbs, Croats and Slovenes, later known as the Kingdom of Yugoslavia.

Despite its relatively short existence, the Kingdom was ruled by two dynasties: the and the . King Milan Obrenović ruled from to , when he abdicated the throne. He was succeeded by his son, , who ruled from to , when he was deposed by a group of officers. The slaughter of the royal couple (the king and ) by the shocked . This opened the way for the descendants of (Karageorge), regarded by throughout the as the man who threw off the Turkish yoke, to return to the throne. Petar Karađorđević was initially reluctant to accept the crown, disgusted as he was by the "". However, he finally did accept and was the Kingdom's sovereign from to , the day that the Kingdom of Serbs, Croats and Slovenes was proclaimed.