The Kingdom of Croatia-Slavonia or Croatia Slavonia (Croatian: Trojedna Kraljevina Hrvatska-Slavonija-Dalmacija; Hungarian: Horvát-, Szlavon- és Dalmátországok; German: Königreich Kroatien und Slawonien) was an autonomous kingdom within the Austro-Hungarian Empire. It was part of the Hungarian Kingdom within the dual Austro-Hungarian state, being within the Lands of the Crown of St. Stephen or Transleithania. The kingdom was ruled by the Habsburg King-Emperor of Austria-Hungary (Kaiser und König), under his title as King of Hungary. The monarch's title was "King of Croatia and Slavonia". The King's appointed steward was the Ban of Croatia and Slavonia.

The kingdom pressed its claim on the Kingdom of Dalmatia under the title the Triune Kingdom of Croatia, Slavonia, and Dalmatia within the Hungarian part of the monarchy, which was also a historic name for a Croatian Kingdom. Dalmatia was a Kronland within the imperial Austrian part of Austria-Hungary (also known as Cisleithania). The claim was, for most of the time, supported by the Hungarian government which backed Croatia-Slavonia in an effort to increase its share of the dual state. The union between the two primarily Croatian lands of Austria-Hungary never took place however.[10] According to the Article 53 of the Croatian–Hungarian Agreement, that governed Croatia's political status in the Hungarian-ruled part of Austria-Hungary, ban's official title was "Ban of Kingdom of Dalmatia, Croatia and Slavonia".[11][12] 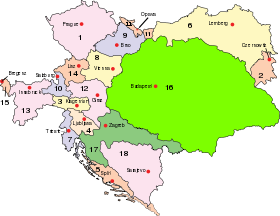 The Kingdom of Croatia-Slavonia was created in 1868, when the former kingdoms of Croatia and Slavonia were joined into one single kingdom. The Croatian parliament, elected in a questionable manner, confirmed the subordination of Croatia-Slavonia to Hungary in 1868 with signing of Hungarian-Croatian union constitution called the Nagodba.[13] This kingdom included parts of present-day Croatia and Serbia (eastern part of Syrmia).

After the Austro-Hungarian Compromise of 1867 the only remaining open question of the new state was the status of Croatia, which would be solved with the Hungarian-Croatian compromise of 1868 when agreement was reached between the Parliament of Hungary on one hand and the Parliament of Croatia-Slavonia on the other hand, with regard to the composition by a joint enactment of the constitutional questions at issue between them.[11]

With this compromise the parliament of personal union (in which Croatia-Slavonia had only twenty-nine deputies) controlled the military, the financial system, legislation and administration, Sea Law, Commercial Law, the law of Bills of Exchange and Mining Law, and generally matters of commerce, customs, telegraphs, Post Office, railways, harbors, shipping, and those roads and rivers which jointly concern Hungary and Croatia-Slavonia.[11]

Similarly to these affairs, trade matters including hawking, likewise with regard to societies which do not exist for public gain, and also with regard to passports, frontier police, citizenship and naturalization, the legislation was joint, but the executive in respect of these affairs was reserved to Kingdom of Croatia-Slavonia.[11] In the end, fifty-five per cent of the total income of Croatia-Slavonia were assigned to the Joint Treasury. 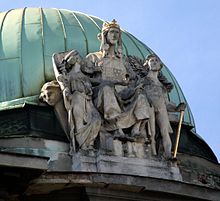 Sculpture symbolizing the Kingdom of Croatia-Slavonia in Zagreb

The Austro-Hungarian Compromise (Ausgleich) of 1867 created the Dual Monarchy. Under the Compromise, Austria and Hungary each had separate parliaments that passed and maintained separate laws. Each region had its own government, headed by its own prime minister. The "common monarchy" consisted of the emperor-king and the common ministers of foreign affairs, defense and finance in Vienna. The Compromise confirmed Croatia-Slavonia's historic, eight-centuries-old relationship with Hungary and perpetuated the division of the Croat lands, for both Dalmatia and Istria remained under Austrian administration.[14]

At Franz Joseph's insistence, Hungary and Croatia reached the Compromise (or Nagodba)) in 1868, giving the Croats a special status in Hungary. The agreement granted the Croats autonomy over their internal affairs. The Croatian ban would now be nominated by the Hungarian prime minister and appointed by the king. Areas of "common" concern to Hungarians and Croats included finance, currency matters, commercial policy, the post office, and the railroad. Croatian became the official language of Croatia's government, and Croatian representatives discussing "common" affairs before the Hungarian diet were permitted to speak Croatian.[15] A ministry of Croatian Affairs was created within the Hungarian government.

Although the Nagodba provided a measure of political autonomy to Croatia-Slavonia, it was subordinated politically and economically to Hungary.[14]

The Autonomous Government or Land Government (Croatian: Zemaljska vlada), established in 1868 with seat in Zagreb, until 1914 it possessed three departments:

At the head of the Autonomous Government in Croatia-Slavonia stood the Ban, who was responsible to the Croatian-Slavonian-Dalmatian Diet.[16] 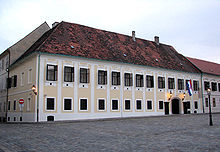 The Ban was appointed by the King, on the proposal and under the counter-signature of the Joint Hungarian minister-president.[16]

The supreme court of kingdom was the Stol sedmorice (Table of Seven), while the second-level court was the Banski stol (Ban's Table) headed by the ban.[17] 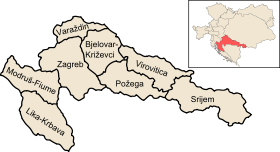 Counties of Croatia-Slavonia within the Austro-Hungary

In November 1874, under Croatian ban Ivan Mažuranić, Croatia-Slavonia was divided into eight counties (known as comitatus):[18]

Lika-Krbava became a county after the incorporation of the Croatian Military Frontier into Croatia-Slavonia in 1881.[18] The counties were subsequently divided into a total of 77 districts, which were then divided into okrugs and municipalities.

Alternate flag, used internally "for autonomic affairs" by decree of the viceroy.[19] 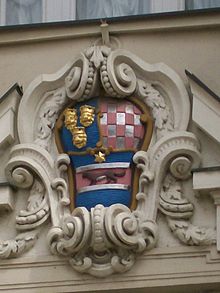 According to the Croatian–Hungarian Agreement in 1868:

Croatia, Slavonia and Dalmatia can, within their own frontiers in their internal affairs, use their own combined colours and coat of arms, the latter, however, being surmounted by the Crown of St. Stephen.(Art. 61) The emblem of the Joint Affairs of the territories of the Hungarian Crown is formed by the combined arms of Hungary and of Croatia, Slavonia and Dalmatia. (Art. 62) At times when Joint Affairs are being debated, the combined Croatian-Slavonia-Dalmatian flag is to be hoisted beside the Hungarian flag, upon the building in which the Joint Parliament of the territories of the Hungarian Crown is being held. (Art. 63)[20][21] 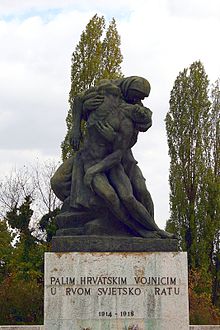 Memorial to Croatian soldiers who fought in the First World War

The modern University of Zagreb was founded in 1874. The Yugoslav Academy of Sciences and Arts and Matica hrvatska were the main cultural institutions in the kingdom. In 1911 the main cultural institution in the Kingdom of Dalmatia, Matica dalmatinska, marged with Matica hrvatska. Vijenac was one of the most important cultural magazines in the kingdom. The building of the Croatian National Theatre in Zagreb was opened in 1895. The Croatian National Theatre in Osijek was established in 1907. The Sisters of Charity Hospital in Zagreb was the first established in the kingdom.

Roughly 75% of the population were Roman Catholic, with the remaining 25% Serbian Orthodox. The Catholic Church had the following hierarchy within the kingdom:

The Croatian Sports Association was formed in 1909 with Franjo Bučar as its president. While Austria-Hungary had competed in the modern Olympics since the inaugural games in 1896, the Austrian Olympic Committee and Hungarian Olympic Committee held the exclusive right to send their athletes to the games. The association organized a national football league in 1912.