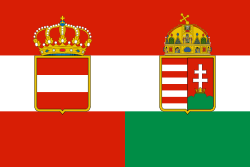 The Austro-Hungarian Compromise of 1867 (German: Ausgleich, Hungarian: Kiegyezés) established the dual monarchy of Austria-Hungary. The Compromise re-established the sovereignty of the Kingdom of Hungary, separate from and no longer subject to the Austrian Empire. Under the Compromise, the Cisleithanian (Austrian) and Transleithanian (Hungarian) regions of the state were governed by separate Parliaments and Prime Ministers. Unity was maintained through rule of a single head of state of both territories and governments. The armed forces were combined with the Emperor-King as commander-in-chief. Certain key ministries were under the direct authority of the Crown, and served the whole Empire and Kingdom.

In the Middle Ages Austria was a quasi-independent state within the Holy Roman Empire, ruled by the House of Habsburg, while the Kingdom of Hungary was a sovereign state outside the Empire. In 1526 at the Battle of Mohács, Hungary was defeated and largely conquered by the Ottoman Empire. The crown of Hungary was inherited by the Habsburgs, with part of the Kingdom preserved from the Ottomans, who were subsequently driven out of Hungary in 1699. From 1526 to 1806, Austria and Hungary were in a “union of crowns”, having the same ruler but remaining two countries. In the 18th century, Hungary was legally subordinated to Austria, though remaining nominally sovereign.

In the failed Hungarian Revolution of 1848, the Magyars tried to regain independence, and were defeated by the Austrian Empire only with the aid of the Russian Empire. After 1848, the Empire instituted several constitutional reforms, trying to resolve the problem, but without success.[1]

In 1866, Austria was completely defeated in the Austro-Prussian War and its position as the leading state of Germany ended forever, as the remaining German minor states were soon absorbed into the German Empire created by Prussia. Austria also lost almost all of her remaining claims and influence in Italy, which had been her chief foreign policy interest.

The state needed to redefine itself to maintain unity in the face of nationalism.[2]

In the wake of the defeat by Prussia, there were renewed calls in Hungary for complete separation from Austria. To avoid this, Emperor Franz Joseph I of Austria and his court floated the suggestion of a dual monarchy.

Hungarian statesman Ferenc Deák is considered the intellectual force behind the Compromise. Deák initially wanted independence for Hungary and supported the 1848 Revolution, but he broke with the outright nationalists and advocated a modified union under the Habsburgs. Deák took the line that while Hungary had the right to full internal independence, questions of defense and foreign affairs were "common" to both Austria and Hungary under the Pragmatic Sanction. He also felt that Hungary benefited through continued unity with wealthier, more industrialized Austria, and that the Compromise would end the pressures on Austria of continually choosing between the Magyar and Slav populations of the Kingdom of Hungary.[3] Imperial Chancellor Beust quickly negotiated the Compromise with the Hungarian leaders.[4] Beust was particularly eager to renew the conflict with Prussia, and thought a quick settlement with Hungary would make that possible.[5] Franz Joseph and Deák signed the Compromise, and it was ratified by the restored Diet of Hungary on 30 March 1867.

Under the Compromise, Austria and Hungary each had separate parliaments that met in Vienna and Buda (later Budapest), respectively, that passed and maintained separate laws. Each region had its own government, headed by its own prime minister. The "common monarchy" consisted of the emperor-king, and the common ministers of foreign affairs, defense, and finance in Vienna. The terms of the Compromise were renegotiated every ten years.

The Compromise of 1867 was meant to be a temporary solution to the problems the state faced, but the resulting system was maintained until the forced dissolution of the state following World War I. The favoritism shown to the Magyars—the second largest ethnic group in the state after the Germans—caused discontent on the part of other ethnic groups like the Czechs and Romanians.[7] Although a "Nationalities Law" was enacted to preserve the rights of ethnic minorities, the two parliaments took very different approaches to this issue.

The basic problem in the later years was that the Compromise with Hungary only whetted the appetites of non-Hungarian minorities and regions in Hungary that were historically within the boundaries of the previous Hungarian Empire. In these, the majority of Hungarians felt they had unwillingly—and only under coercion—accepted the Compromise. The Austrian Archduke—whom was separately crowned King of Hungary—had to swear in his coronation oath not to revise or diminish the historic Imperial (Hungarian) domains to the Hungarian Nobility, Magnates, and Upper Classes. These Hungarian groups never acquiesced to granting “their” minorities the recognition and local autonomy which the Germans had given of the Magyars themselves in the selfsame Compromise.

As such, several ethnic minorities faced increased pressures of Magyarization.[8] Furthermore, the renegotiations that occurred every ten years often led to constitutional crises. Ultimately the Compromise—intended to fix the problems faced by a multi-national state—failed to sublet the internal pressures the old unitary state had felt. As to which extent the Dual Monarchy stabilized the country in the face of rising nationalism is debated even today—particularly by those ethnic groups thus disenfranchised.