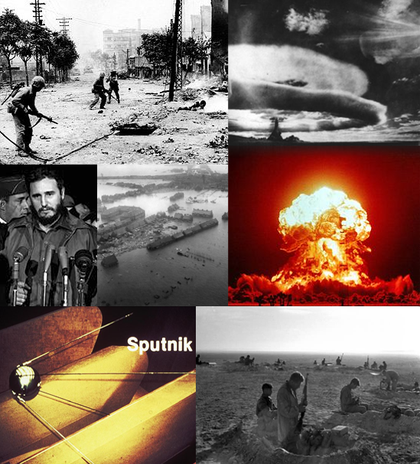 Clockwise, from left: United Nations soldiers during the Korean War, which was the first UN authorized conflict; Two atomic explosions from the RDS-37 and Upshot-Knothole (Soviet and American, respectively) nuclear weapons, symbolizing the escalation of Cold War tensions between the two nations in the 1950s; Israeli troops prepare to fight the Egyptians during the Suez Crisis of 1956; A replica of Sputnik I, the world's first satellite, launched by the Soviet Union in 1957; Fidel Castro leads the Cuban Revolution in 1959; North Sea flood of 1953

The 1950s or The Fifties was the decade that began on January 1, 1950 and ended on December 31, 1959. The decade was the sixth decade of the 20th century. By its end, the world had largely recovered from World War II and the Cold War developed from its modest beginning in the late 1940s to a hot competition between the United States and the Soviet Union by the beginning of the 1960s.

Clashes between communism and capitalism dominated the decade, especially in the Northern Hemisphere. The conflicts included the Korean War in the beginnings of the decade and the beginning of the Space Race with the launch of Sputnik I. Along with increased testing of nuclear weapons (such as RDS-37 and Upshot-Knothole), this created a politically conservative climate. In the United States, the Red Scare (fear of communism) caused public Congressional hearings by both houses in Congress and anti-communism was the prevailing sentiment in the United States throughout the decade (this is what primarily led the country to intervene in the Korean War and later the Vietnam War). The beginning of decolonization in Africa and Asia occurred in this decade and accelerated in the following decade, the 1960s. 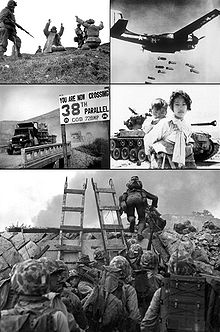 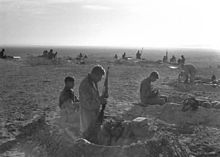 Israeli troops preparing for combat in the Sinai peninsula during the Suez Crisis. 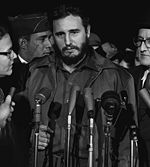 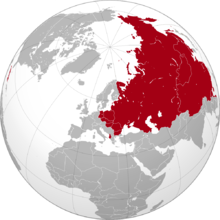 The maximum territorial extent of countries in the world under Soviet influence, after the Cuban Revolution of 1959 and before the official Sino-Soviet split of 1961

With the help of the Marshall Plan, post-war reconstruction succeeded, with some countries (including West Germany) preferring free market capitalism while others preferred Keynesian-policy welfare states. Europe continued to be divided into Western and Soviet bloc countries. The geographical point of this division came to be called the Iron Curtain. It divided Germany into East and West Germany. In 1955 West Germany joined NATO.

The Soviet Union continued its domination of eastern Europe. In 1953 Joseph Stalin, the leader of the Soviet Union, died. This led to the rise of Nikita Khrushchev, who denounced Stalin and pursued a more liberal domestic and foreign policy, stressing peaceful competition with the West rather than overt hostility. There were anti-Soviet uprisings in East Germany and Poland in 1953.

There were some new technologies in the fifties, including television. In 1950, Paper Mate made its first leak free ball point pen. The first copy machine was made in the same year. The Chevrolet Corvette becomes the first car to have an all-fiberglass body in 1953. In 1954 Bell Telephone labs produced the first solar battery. In 1954 you could get a yard of contact paper for only 59 cents. Polypropylene was invented in 1954. In 1955 Jonas Salk invented a polio vaccine which was given to more than seven million American students. In 1956 a solar powered wrist watch was invented. A surprise came in 1957; a 184-pound (83 kg) satellite was launched by the Soviets. They named it Sputnik 1. The space race begins 4 months later the United States launch a smaller satellite. In 1958 the first plastic Coke bottle appeared. 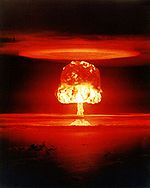 Further information: 1950s in music and Rock and roll 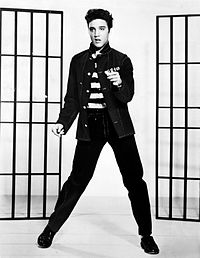 Rock-n-Roll emerged in the mid-50s as the teen music of choice with Sam Cooke, Jackie Wilson, Gene Vincent, Chuck Berry, Fats Domino, Little Richard, James Brown, Bo Diddley, Buddy Holly, Bobby Darin, Ritchie Valens, Duane Eddy, Eddie Cochran, Brenda Lee, Bobby Vee, Connie Frances, Johnny Mathis, Neil Sedaka, Pat Boone and Ricky Nelson being notable exponents. In the mid-1950s, Elvis Presley became the leading figure of the newly popular sound of rock and roll with a series of network television appearances and chart-topping records. Chuck Berry, with "Maybellene" (1955), "Roll over Beethoven" (1956), "Rock and Roll Music" (1957) and "Johnny B. Goode" (1958), refined and developed the major elements that made rock and roll distinctive, focusing on teen life and introducing guitar solos and showmanship that would be a major influence on subsequent rock music.[3] Bill Haley, Jerry Lee Lewis, the Everly Brothers, Carl Perkins, Johnny Cash, Conway Twitty, Johnny Horton, and Marty Robbins were Rockabilly musicians. Doo Wop was another popular genre at the time. Popular Doo Wop and Rock-n-Roll bands of the mid to late 1950s include The Platters, The Flamingos, The Dells, The Silhouettes, Frankie Lymon and The Teenagers, Little Anthony & The Imperials, Danny and the Juniors, The Coasters, The Drifters, The Del-Vikings and Dion and the Belmonts.

The American folk music revival became a phenomenon in the United States in the 1950s to mid-1960s with the initial success of the Weavers who popularized the genre. Their sound, and their broad repertoire of traditional folk material and topical songs inspired other groups such as the Kingston Trio, the Chad Mitchell Trio, The New Christy Minstrels, and the "collegiate folk" groups such as The Brothers Four, The Four Freshmen, The Four Preps, and The Highwaymen. All featured tight vocal harmonies and a repertoire at least initially rooted in folk music and topical songs.

On 3 February 1959, a chartered plane transporting the three American rock and roll musicians Buddy Holly, Ritchie Valens and J. P. "The Big Bopper" Richardson goes down in foggy conditions near Clear Lake, Iowa, killing all four occupants on board, including pilot Roger Peterson. The tragedy is later termed "The Day the Music Died", popularized in Don McLean's 1972 song "American Pie".

Japanese cinema reached its zenith with films from director Akira Kurosawa including Rashomon, Ikiru, Seven Samurai, Throne of Blood, and The Hidden Fortress. Other distinguished Japanese directors of the period were Yasujiro Ozu and Kenji Mizoguchi. Russian fantasy director Aleksandr Ptushko's mythological epics Sadko, Ilya Muromets, and Sampo were internationally acclaimed as was Ballad of a Soldier, a 1959 Soviet film directed by Grigori Chukhrai

The "Golden Era" of 3-D cinematography happened during the 1950s. 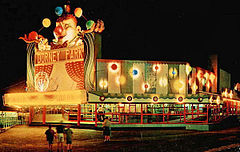 In the early 1950s Jackson Pollock and Willem de Kooning were enormously influential. However by the late 1950s Barnett Newman and Mark Rothko's paintings became more in focus to the next generation.

Pop Art used the iconography of television, photography, comics, cinema and advertising. With its roots in dadaism, it started to take form towards the end of the 1950s when some European artists started to make the symbols and products of the world of advertising and propaganda the main subject of their artistic work. This return of figurative art, in opposition to the abstract expressionism that dominated the aesthetic scene since the end of World War II was dominated by Great Britain until the early 1960s when Andy Warhol, the most known artist of this movement began to show Pop Art in galleries in the United States.