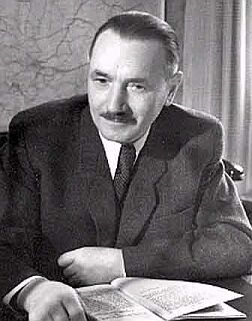 Bolesław Bierut (real name "Bolesław Biernacki", , - , ) was a Polish leader, a Stalinist who became after the Soviet occupation of the country in the aftermath of .

Bierut was born near , the son of a village teacher Henryk Rutkowski and his wife Barbara (hence his later adopted name "Bie(r)-rut"). In 1925 he went to to be trained at the school of the .

Beginning in 1933 he was a secret agent of Soviet military intelligence, the . When the was dissolved by in 1938, he was lucky in that he had been sentenced to 10 years in a Polish prison for his antistate political activity, and therefore could not travel to the (USSR), and undergo the , which included the execution of most of the leaders of the . After an amnesty from the Polish government in 1938 he settled down in and worked as a bookkeeper in a cooperative.

After the outbreak of World War II Bierut fled to Eastern Poland (soon occupied by the ) in order to avoid military service. Bierut would spend most of the war in the USSR, and was recalled to head the new in 1943. He functioned as head of the Polish provisional quasi-parliament (, "Krajowa Rada Narodowa"), created by Soviet adherents, from 1944 to 1947.

Bierut was instrumental in the Soviet takeover of Poland and the installation of a Stalinist regime. From 1947 to 1952, he served in the as President and then (after the abolition of the Presidency) Prime Minister. He was also the first Secretary General of the ruling from 1948 to 1956.

Bierut oversaw the trials of Polish military leaders such as General Stanisław Tatar, along with 40 members of the (Freedom and Independence) organisation, and various church officials. Many more opponents of the new regime, such as "the hero of ", , were sentenced to death in s. Bierut signed many of Stalinist Poland's death sentences.

A prominent Polish historian and professor, , argued in recent times that it is not out of question that there could have been two persons claiming to be Bolesław Bierut. One of them, either the real person or his alias, was shot by an unidentified gunman in the French Hotel in , in April 1945 or in 1947. According to this theory, the assassination was kept under secrecy by the authorities and the dead "Bierut" was replaced by his double within an hour.

Bolesław Bierut died under mysterious circumstances in in 1956 during a political visit to the Soviet Union, shortly after attending the during which denounced the and of Stalin.

Bierut's death, which was speculated to be a or a , symbolically marked the end of the era of in Poland.