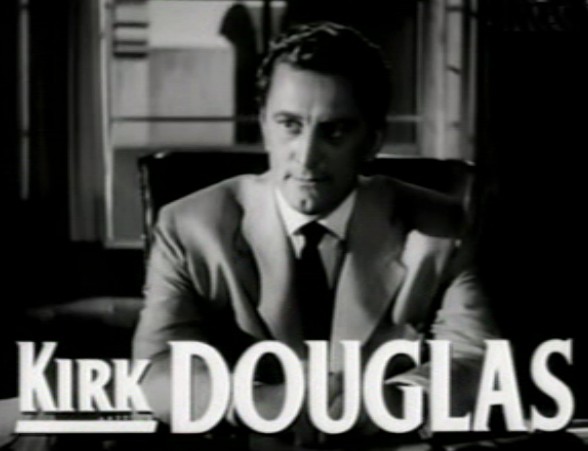 Coming from a poor family, as a boy, Douglas sold snacks to mill workers to earn enough to buy milk and bread. Later, he delivered newspapers and claims to have worked at more than forty jobs before becoming an actor. [Thomas, Tony. "The Films of Kirk Douglas". Citadel Press, New York, 1991. ISBN 0-8065-1217-2. p. 12.] He found living in a family of six sisters to be stifling, "I was dying to get out. In a sense, it lit a fire under me."

Though he couldn’t afford tuition, Douglas talked his way into and received a loan, which he paid back working part-time as a gardener and a janitor. He was a standout on the wrestling team, and one summer he wrestled in a carnival to make some extra money.

His talents were noticed at the in , where he received a special scholarship. One of his classmates was Betty Joan Perske (soon to be better known as ), who later would play an important role in launching his film career.

Douglas served in the from the U.S. entry into in 1941 and received a medical discharge for war injuries in 1944. On May 3, 1943, Diana Dill, his former classmate, appeared on the cover of "Life" magazine. Seeing her photograph, Douglas told his fellow sailors that he would marry her, which he did on . Their son, , was born in 1944. They divorced nine years later.

After the war, Douglas returned to New York City and found work in radio theatre and commercials. His stage break occurred in "Kiss and Tell", which led to other roles. Douglas had planned to remain a stage actor but Lauren Bacall helped him get his first screen role in the film "" (1946), starring . Wallis was on his way to New York to look for new talent when Bacall suggested he visit Douglas, who was rehearsing a play called "The Wind Is Ninety". Douglas finished the play's run and with no follow up work in sight, headed to . He was immediately cast in the leading role, and made his film acting debut as a weak man dominated by a ruthless woman, unlike his later roles were he often played dominating roles.

Douglas established his image as a tough guy in his eighth film, "Champion", playing a selfish boxer, and from then on, he made a career of playing "sons of bitches."

Among his various roles, Douglas played a cowboy in his first western "" (1951). Douglas quickly became comfortable with riding horses and playing gunslingers, and returned in many westerns. In "" (1962), one of his favorite roles, Douglas plays a cowboy trying to live by his own code, much as he did in real life.

In "" (1952), one of his three Oscar-nominated roles, Douglas plays Jonathan Shields, a hard-nosed film producer who manipulates and uses his actors, writers, and directors.

His role as Vincent Van Gogh in "Lust for Life" (1956), filmed mostly on location in France, was noted not only for the veracity of his appearance but also for how he conveyed the painter’s internal turmoil. Director stated, "Kirk Douglas achieved a moving and memorable portrait of the artist—a man of massive creative power, triggered by severe emotional stress, the fear and horror of madness. In my opinion, Kirk should have won the Academy Award."

Douglas played the lead with an all-star cast in "Spartacus" (1960). He was the executive producer as well, raising the $12 million production cost.

In addition to serious, driven characters, Douglas was adept at roles requiring a comic touch, as in "20,000 Leagues Under the Sea" (1954), an adaption of the novel, wherein he plays a happy-go-lucky sailor who is the opposite in every way of the brooding Captain Nemo (). This was 's first full-length live action movie and a box office hit. He manages a similar comic turn in the western "" (1955) and in "" (1963).

Douglas made several films over the decades with , including "" (1948), "Gunfight at the OK Corral" (1957), "The Devil's Disciple" (1959), "" (1964), and "" (1986). Douglas was always second-billed under Lancaster in these films but, with the exception of "I Walk Alone", in which Douglas played a villain, their roles were more or less the same size. Both actors arrived in Hollywood at the same time, and first appeared together in the fourth film for each. They both became actor-producers who sought out independent Hollywood careers.

Douglas stated that the keys to acting success are determination and application, "You must know how to function and how to maintain yourself, and you must have a love of what you do. But an actor also needs great good luck. I have had that luck."

Unlike some actors like , Douglas had a high opinion of actors, movies, and moviemaking, "To me it is the most important art form—it "is" an art, and it includes all the elements of the modern age." But he also stressed the entertainment value of films, "You can make a statement, you can say something, but it must be entertaining."

Douglas received three Academy Award nominations for his work in "Champion", "" and "Lust for Life". He was especially disappointed for not winning for the later film, "I really thought I had a chance." Douglas did not win any competitive Oscars, but received a special Oscar in 1996 for "50 years as a moral and creative force in the motion picture community".

For his contributions to the motion picture industry, Kirk Douglas has a star on the at 6263 Hollywood Blvd. Douglas is one of the few personalities (along with , , and ) whose star has been stolen and later replaced. [cite web|url=http://www.hollywoodusa.co.uk/walkoffamestarlocations.htm|title=Hollywood Walk of Fame|work=Guide to and locations of the stars on Hollywood Boulevard.|accessdate=2008-06-13] In 1984, he was inducted into the at the in Oklahoma City, , .

In October 2004, the avenue "Kirk Douglas Way" in was named in his honor by the Palm Springs International Film Society and Film Festival. Popular at home and around the world, Kirk Douglas received the in 1981, the French Legion of Honor in 1985, and the National Medal of the Arts in 2001.

In 1996, he suffered a , partially impairing his ability to speak. On December 8, 2006, Douglas appeared on "", where the entire staff wished him a happy 90th birthday the night before. His son Michael, along with his wife, , were among the many celebrities who attended his birthday celebration. On the show, he discussed the books he has written, and the death of his son, Eric in 2004.

A portrait of Douglas, titled "The Great and the Beautiful," which encapsulated his film career, art collection, philanthropy and rehabilitation from a deadly helicopter crash and the aftermath of a severe stroke, appeared in "Palm Springs Life" magazine in 1999. The article said "For years, this energetic performer could be seen jogging several miles to get his morning paper, playing tennis with locals or posing for snapshots and signing autographs for star-struck out-of-towners. He has been a veritable one-man tourist promotion over the past four decades, extolling the virtue of the city he loves to virtually anyone who'll listen".