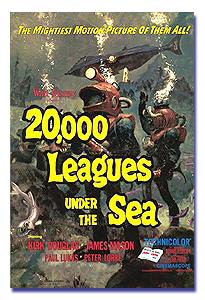 "20,000 Leagues Under the Sea" is a film starring as Ned Land, as , as Professor Aronnax and as Conseil. The film has become the most well-known adaptation of the book of the same name by .

Taglines:
*"The Mightiest Motion Picture of Them All!"
*"Walt Disney's Mighty, Magnificent, Memorable... [20,000 Leagues Under the Sea] "

In the year 1866, rumours of a devastating attacking ships in the have created apprehension and fear among sailors, disrupting shipping. Prof. Pierre M. Aronnax (Lukas) and his assistant, Conseil (Lorre), are on their way to Saigon but get stuck in by the halting of ships. Aronnax is interviewed and mentions he has an open mind on the matter, but news reporters twist Aronnax's statements as if he had said the monster was definitely real, and make up an article with accompanying illustrations of the monster. The U.S. Government invites Aronnax onto an expedition to either prove or disprove the monster's existence.

The voyage on the U.S. warship is uneventful and frustrating at first, with only little boosts in crew morale thanks to the singing and music of Ned Land (Douglas), a cocky harpooner seen at the beginning of the film, dismissing a pair of con men who spin a fabulous tale about the fabled sea monster.

Just after the captain cancels further searching, the "monster" is finally spotted. Trying to take it down with cannon fire, the ship is rammed, and Ned, Aronnax, and Conseil are thrown overboard. They find themselves abandoned as the warship, badly disabled and the crew struggling to save it, drifts away. All hope seems lost.

The three drift into a strange-looking metal vessel, and realize the "monster" is a man-made "submerging boat", that seems to have been deserted. Inside they find all sorts of obscure and interesting objects. Aronnax then looks through a massive viewing window and sees the crew, wearing underwater-suits and breathing devices, holding an undersea funeral of a shipmate killed during the battle.

The crew spots the intruders aboard their ship. The three castaways try to escape, but end up being captured. The captain introduces himself as Nemo, master of the "Nautilus", and does not take kindly to visitors. "The sea brought you, the sea shall have you back", except Aronnax, whom he recognizes for his work and research. He tempts Aronnax to stay, but Aronnax prefers to share his companions' fate &ndash; thus passing a test of character.

Nemo's knowledge and technology make a strong impression on Aronnax. His companions, however, do not share his enthusiasm. Nemo takes them all on an underwater expedition to gather supplies, but Ned rather foolishly tries to salvage a treasure chest from a sunken wreck, almost getting attacked by a shark. Nemo lectures him that he "cannot eat pieces of eight" and reminds him the greatest treasure of all is a "sound mind and a full belly." Aronnax gets more and more intrigued by Nemo's skills, especially what powers the Nautilus: atomic energy. Aronnax: "Such a secret could revolutionise the world!" Nemo: "Or destroy it".

After having travelled "10,000 under the sea" [meaning, "10,000 leagues "across the sea" while submerged the entire voyage"] , Nemo takes Arronax to the island of Rora Penthe, where inmates used as slaves load a ship with minerals to produce ammunition, so "the world will die a little more" (Nemo). Nemo reveals he was once a prisoner himself, as was the crew of the "Nautilus". At night, the "Nautilus" rams the ship and destroys it, killing the entire crew. Aronnax accuses Nemo of being a , to which Nemo defends himself, stating his actions have just saved some thousand people from death in war. But it becomes obvious that revenge is also involved.

Ned, having seen fellow sailors murdered, has had his fill and spurs into action, sneaking into the captain's cabin to get the co-ordinates of Nemo's base of Vulcania. He puts messages in bottles, hoping somebody will pick these up and free him of his captivity.

Off the coast of , the "Nautilus" gets stranded on a reef. Under the pretense of wanting to participate in a scientific survey, Ned asks to go ashore with Conseil, but he attempts escape, only to be chased back to the Nautilus by cannibals, who are repelled from the ship by electrical charges circulated on the "Nautilus"'s skin. Because Nemo had him warned, he now puts Ned in a cell.

The tide floats the "Nautilus" free, but a warship is fast approaching and opening fire, causing a hull breach and momentarily loss of control, sending and sinking the "Nautilus" deeper than ever before, where it attracts the attentions of a .

The electric charge fails to repel the monster squid, so Nemo is forced to fight the beast on the surface in a stormy night. During the battle, Nemo is caught in one of the squid's tentacles, but Ned &ndash; who has freed himself from his cell &ndash; jumps to his rescue and saves his captor's life.

As the "Nautilus" approaches Vulcania, Nemo confides to Aronnax that he had considered using him as a mediator to share his secrets with the world. But it is too late. Vulcania is surrounded by warships that have deployed ground troops. Nemo takes this as an answer and decides to destroy his base rather than let his findings fall into wrong hands. But when returning to the "Nautilus", he is struck and mortally wounded by an invader's bullet. After navigating the "Nautilus" out of Vulcania and settling on the ocean floor as its last resting place, Nemo announces, "I'm dying. And the "Nautilus" is dying with me." Loyal to Nemo to the very end, his entire crew declares that they will accompany their captain in death.

Nemo orders everybody to return to their quarters. Against joining in the mass suicide, Arronax, Conseil, and Ned are forcibly taken to their cabins. Ned fights back, escapes to the now deserted bridge, and manages to surface the "Nautilus", hitting a reef in the process which begins to rapidly flood the ship. After rescuing Arronax and Conseil, the three escape in the launch/lifeboat. In his final moments, Nemo staggers to the viewing window, slumps against it, and looks at his beloved ocean one last time before he collapses and dies.

The companions witness the destruction of Vulcania in an incredible explosion, apparently atomic, creating an enormous mushroom cloud. The shockwave and the flooding takes the "Nautilus" back to its watery grave, and as the "Nautilus" disappears forever, Nemo's last words to Arronax echo: "There is hope for the future. And when the world is ready for a new and better life, all this will someday come to pass. In God's good time."

The film received positive reactions, and has become a classic film of the Disney corporation. Audiences fondly remember it for the giant-squid battle and for the "Nautilus" itself, which have both become images of both the film and Verne's original novel.

Even 50 years after the initial release "20,000 Leagues Under the Sea" is considered by many the most mature Disney live action production, rich in controversial and philosophical dialogue revolving around timeless issues, a fascinating display of pessimism (Nemo) versus optimism (Prof. Aronnax).

The film was also highly praised for the performances of the leading actors. This was the first time that major stars such as Kirk Douglas, James Mason and Peter Lorre had appeared in a Disney film, although , a well-known actor in British films, had played in Disney's 1950 version of "Treasure Island". Mason especially was singled out for his performance as Captain Nemo, and many people who first saw him onscreen in the film identify him most strongly with this role.

In addition, the era in which events take place comes alive in meticulous artistic accuracy, down to the beard trim of the sailors, surpassed only by the ed steel skin of the "Nautilus". And yet the Disney version echoes the hopes and fears of audiences of the 1950s and beyond, equally illustrating the chances and the dangers of nuclear power. What was also well noted about the film was that the film's director, Richard Fleischer, was in fact the son of the man who was arguably Disney's biggest rival in the 1930's, , creator of the Betty Boop and Popeye cartoons.

The film has inspired a at and a at . used the original sets as a walk-through attraction from to . Walt Disney World Resort's also had from 1971 to 1994 which consisted of a submarine ride, complete with the giant squid attack. For this ride, voice artist stood in for James Mason in the role of Captain Nemo.

Comparisons with the book

*
*
* Nautilus
* , a ride that used to be in Walt Disney World that was based on the film.