Nautilus (Verne)
For the journal about molluscs, see The Nautilus (journal). 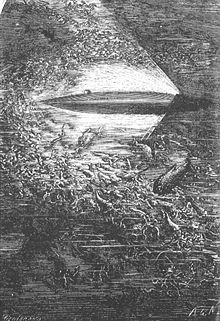 The Nautilus under way. 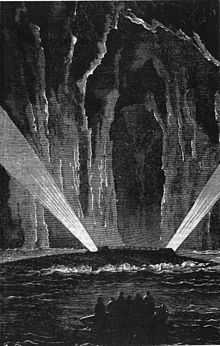 The Nautilus, as pictured in The Mysterious Island.

The Nautilus is the fictional submarine featured in Jules Verne's novels Twenty Thousand Leagues Under the Sea (1870) and The Mysterious Island (1874). Verne named the Nautilus after Robert Fulton's real-life submarine Nautilus (1800)[citation needed]. Three years before writing his novel, Jules Verne also studied a model of the newly developed French Navy submarine Plongeur at the 1867 Exposition Universelle, which inspired him for his definition of the Nautilus.[1]

The Nautilus is described by Verne as "a masterpiece containing masterpieces." It is designed and commanded by Captain Nemo. Electricity provided by sodium/mercury batteries (with the sodium provided by extraction from seawater) is the craft's primary power source for propulsion and other services.

The Nautilus is double hulled, and is further separated into water-tight compartments. Its top speed is 50 knots. Its displacement is 1,356.48 French freight tons immerged (1,507 submerged). In Captain Nemo's own words:

The Nautilus uses floodable tanks in order to adjust buoyancy and so control its depth. The pumps that evacuate these tanks of water are so powerful that they produce large jets of water when the vessel emerges rapidly from the surface of the water. This leads many early observers of the Nautilus to believe that the vessel is some species of whale, or perhaps a sea monster not yet known to science. To submerge deeply in a short time, Nautilus uses a technique called "hydroplaning", in which the vessel dives down at a steep angle.

The Nautilus supports a crew that gathers and farms food from the sea. The Nautilus includes a galley for preparing these foods, which includes a machine that makes drinking water from seawater through distillation. The Nautilus isn't able to refresh its air supply, so Captain Nemo designed to do it by surfacing and exchanging stale air for fresh, much like a whale. The Nautilus is capable of extended voyages without refueling or otherwise restocking supplies. Its maximum dive time is around five days.

Much of the ship is decorated to standards of luxury that are unequaled in a seagoing vessel of the time. These include a library with boxed collections of valuable oceanic specimens that are unknown to science at the time, expensive paintings, and several collections of jewels. The Nautilus also features a lavish dining room and even an organ that Captain Nemo uses to entertain himself in the evening. By comparison, Nemo's personal quarters are very sparsely furnished, but do feature duplicates of the bridge instruments, so that the captain can keep track of the vessel without being present on the bridge. These amenities however, are only available to Nemo, Professor Aronnax and his companions.

From her attacks on ships, using a ramming prow to puncture target vessels below the waterline, the world thinks it a sea monster, but later identifies it as an underwater vessel capable of great destructive power, after the Abraham Lincoln is attacked and Ned Land strikes the metallic surface of the Nautilus with his harpoon.

Its parts are built to order in France, the United Kingdom, Prussia, Sweden, the United States and elsewhere. Then they are assembled by Nemo's men on a desert island. The Nautilus most likely returned to this island and later helped castaways in the novel "Mysterious Island". After Nemo dies on board, the volcanic island erupts, entombing the Captain and the Nautilus for eternity.

Beside her original appearance in Twenty Thousand Leagues Under the Sea and The Mysterious Island, the Nautilus also appears in numerous other works, including:

Jules Verne's text in 20,000 Leagues under the Sea provides a great deal of information about the Nautilus as discussed on this page: Jules Verne's Nautilus. Many artists and ordinary folk have envisioned over the decades their own intrepretations of the Nautilus: A Catalog of Nautilus Designs

Besides the Nautilus, other submarines do feature in Jules Verne novels. In the 1896 novel Facing the Flag the pirate Ker Karraje uses an unnamed submarine that acts both as a tug to his schooner The Ebba and for ramming and destroying ships which are the targets of his piracy. The same book also features HMS Sword, a small Royal Navy experimental submarine which is sunk after a valiant but unequal struggle with the pirate submarine. In the book The Master of the World, Robur's secondary vehicle, which is called the Terror, is a strange flying machine that has a submarine mode, as well as an automobile and speedboat mode. It briefly eludes naval forces on the Great Lakes by diving.