From the Earth to the Moon

From the Earth to the Moon (French: De la Terre à la Lune, 1865) is a humorous science fantasy novel by Jules Verne and is one of the earliest entries in that genre. It tells the story of the president of a post-American Civil War gun club in Baltimore, his rival, a Philadelphia maker of armor, and a Frenchman, who build an enormous sky-facing Columbiad space gun and launch themselves in a projectile/spaceship from it to a Moon landing.

The story is also notable in that Verne attempted to do some rough calculations as to the requirements for the cannon and, considering the comparative lack of any data on the subject at the time, some of his figures are surprisingly close to reality. However, his scenario turned out to be impractical for safe manned space travel since a much longer muzzle would have been required to reach escape velocity while limiting acceleration to survivable limits for the passengers.

The character of "Michel Ardan" in the novel was inspired by Félix Nadar. 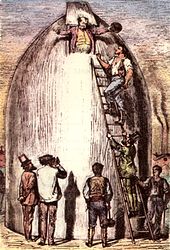 The projectile, as pictured in an engraving from the 1872 Illustrated Edition. 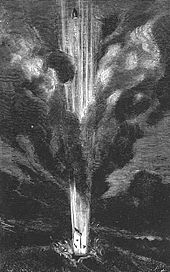 The firing of the Columbiad.

It's been some time since the end of the American Civil War. The Gun Club, a society based in Baltimore and dedicated to the design of weapons of all kinds (especially cannons), meets when Impey Barbicane, its president, calls them to support his idea: according to his calculations, a cannon can shoot a projectile so that it reaches the moon. After receiving the whole support of his companions, a few of them meet to decide the place from where the projectile will be shot, the dimensions and makings of both the cannon and the projectile, and which kind of powder are they to use.

An old enemy of Barbicane, a Captain Nicholl of Philadelphia, designer of plate armor, declares that the enterprise is absurd and makes a series of bets with Barbicane, each of them of increasing amount over the impossibility of such feat.

The first obstacle, the money, and over which Nicholl has bet 1000 dollars, is raised from most countries in America and Europe, in which the mission reaches variable success (while the USA gives 4 million dollars, England doesn't give a farthing, being envious of the United States in matters of science), but in the end nearly five and a half million dollars are raised, which ensures the financial feasibility of the project.

During a meeting between Ardan, the Gun Club, and the inhabitants of Florida, Nicholl appears and challenges Barbicane to a duel. The duel is stopped when Ardan—having been warned by J. T. Maston, secretary of the Gun Club—meets the rivals in the forest where they have agreed to duel. Meanwhile, Barbicane finds the solution to the problem of surviving the incredible acceleration that the explosion would cause. Ardan suggests that Barbicane and Nicholl travel with him in the projectile, and the offer is accepted.

In the end, the projectile is successfully launched, but the destinies of the three astronauts are left inconclusive. The sequel, Around the Moon, deals with what happens to the three men in their travel from the Earth to the Moon.

Technical feasibility of a space cannon

In his 1903 publication on space travel, Konstantin Tsiolkovsky refuted Verne's idea of using a cannon for space travel. He concluded that a gun would have to be impossibly long. The gun in the story would subject the payload to about 22000 g of acceleration (see formula). However, he was nevertheless inspired by the story and developed the theory of spaceflight.

Gerald Bull and the Project HARP proved after 1961 that a cannon can shoot a 180 kg (400 lb) projectile to an altitude of 180 kilometres (110 mi) and reach 32 percent of the needed escape velocity.[citation needed] Additionally, during the Plumbbob nuclear test series, a 900 kg (2,000 lb) capping plate made of steel was blasted away and never found. It has been speculated that the plate entered outer space because its speed was estimated to be between two and six times the escape velocity,[2] but engineers believe it melted in the atmosphere.[3]

The novel was adapted as the opera Le voyage dans la lune in 1875, with music by Jacques Offenbach.

In H. G. Wells' 1901 The First Men in the Moon (also relating to the first voyagers to the Moon) the protagonist, Mr. Bedford, mentions Verne's novel to his companion, Professor Cavor, who replies (in a possible dig at Verne) that he does not know what Bedford is referring to. Verne returned the dig later when he pointed out that he used guncotton to send his men to the moon, and one could see it any day. "Can Mr. Wells show me some "cavourite"?", he asked archly.

The novel (along with Wells' The First Men in the Moon) inspired the first science fiction film, A Trip to the Moon, made in 1902 by Georges Méliès. In 1958, another film adaptation of this story was released, titled From the Earth to the Moon. It was one of the last films made under the RKO Pictures banner. The story also became the basis for the very loose adaptation Jules Verne's Rocket to the Moon (1967), a caper-style British comedy starring Burl Ives and Terry-Thomas. The 1961 Czechoslovak film The Fabulous Baron Munchausen combines characters and plot elements from the Verne novel with those of the stories of Baron Münchhausen and Cyrano de Bergerac.

The novel and its sequel were the inspiration for the computer game Voyage: Inspired by Jules Verne.

In 1889 Verne wrote a second sequel to the novel, The Purchase of the North Pole, which has the gun club members (led by J. T. Maston) plan to use the "Columbiad" to alter the tilt of the earth to enable the mineral wealth of the Arctic region to be put within reach of exploitation.

Among its other homages to classic science fiction, an issue of Planetary involved the Planetary group finding that the Gun Club had been successful in launching the projectile, but that a miscalculation led to a slowly decaying orbit over the decades with the astronauts long dead from lack of air and food.

Barbicane appears in Kevin J. Anderson's novel Captain Nemo: The Fantastic History of a Dark Genius as an Ottoman official whose chief rival, Robur, designs a number of innovative weapons to counteract him, including an attempt to launch a three-man mission to the Moon.

During their return journey from the moon, the crew of Apollo 11 made reference to Jules Verne's book during a TV broadcast on July 23.[4] The mission's commander, astronaut Neil Armstrong, said, "A hundred years ago, Jules Verne wrote a book about a voyage to the Moon. His spaceship, Columbia [sic], took off from Florida and landed in the Pacific Ocean after completing a trip to the Moon. It seems appropriate to us to share with you some of the reflections of the crew as the modern-day Columbia completes its rendezvous with the planet Earth and the same Pacific Ocean tomorrow."

In Back to the Future Part III, Clara Clayton asks Emmett Brown if he believes mankind will ever "travel to the moon the way we travel across the country on trains." Being from the future Doc already knows that doesn't happen for another 84 years, but he affirms they will while quoting a passage from From the Earth to the Moon. Clara calls him out on this, and it's from this encounter that the pair discovers their mutual love of Jules Verne novels.

The first incarnation of the roller coaster Space Mountain in Disneyland Paris, named Space Mountain: De la Terre à la Lune, was based loosely on this novel, the ambience being that of the book being noted throughout the ride with its rivet and boiler plate effect. The ride includes the "Columbiad", which recoils with a bang and produces smoke as each car passes, giving riders the perception of being shot into space.

The attraction was built after the opening of Euro Disneyland and opened in 1995. The attraction's exterior was designed using a Verne era retro-futuristic influence, in keeping with the rest of Discoveryland.

During 2005, the ride was refurbished and renamed Space Mountain: Mission 2 as part of the Happiest Celebration on Earth. The ride no longer features any of the original storyline based on the novel, with the exception of the name of the cannon (Columbiad) and "Baltimore Gun Club" signs.

In 1995 the BBC made a documentary about the creation of Space Mountain, called "Shoot For The Moon". The 44-minute programme followed Tim Delaney and his team in bringing the book From the Earth to the Moon by Jules Verne to life. The programme shows the development of the attraction, from conception over construction up to testing and fine-tuning the final attraction, including its soundtrack. The documentary, originally broadcast on BBC2 in the UK, was also aired on other channels in many countries.

Space Mountain is also located next to the walk-through attraction "Les Mystères du Nautilus" based on Walt Disney's adaptation of Jules Verne's other famous literary work Twenty Thousand Leagues Under the Sea.