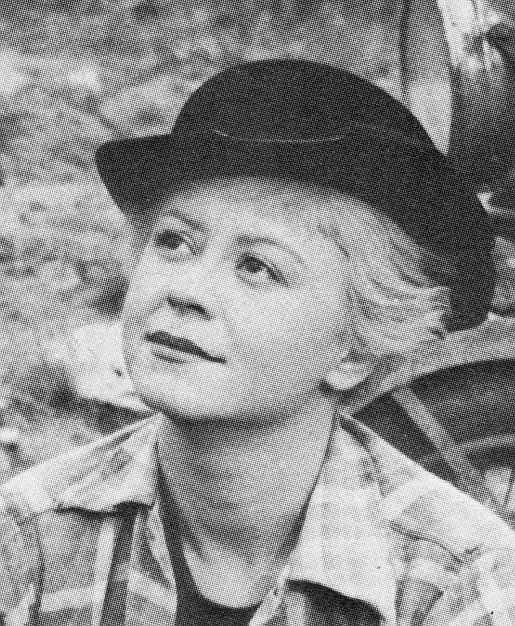 Giulia Anna (Giulietta) Masina ( &ndash; ) was a famous Italian actress who won the award at the .

She starred in "La Strada" and "", the 1956 and 1957 winners, respectively, of the for . She was the wife of the Italian film director , by whom Masina's career was much helped. By her intense performances, incarnating naive characters who dealt with cruel circumstances, Giulietta Masina is often known as the "female Chaplin". [ [http://movies.nytimes.com/movie/review?res=9C0CE6DD1138E133A2575AC2A9669D946692D6CF "nytimes" review of "Nights of Cabiria"] ] [ [http://filmsdefrance.com/FDF_La_Strada_1954_rev.html reference at "filmsdefrance.com"] ] [ [http://www.filmbug.com/db/171343-8 reference at "filmbug.com"] ]

Giulia Anna Masina was born on , , in , Bologna. Her parents were Gaetano Masina, a ist and a music teacher, and Anna Flavia Pasqualin, a schoolteacher. Nonetheless, most childhood and adolescence of Giulia happened in , at the home of an aunt who had widowed. Giulietta Masina had three elder siblings: Eugenia, and the twins Mario and Maria. She attended the "Hermanas Ursulinas" school. She graduated in , from the .

Attending the university, Giullietta Masina turned to acting, particularly since 1941 participating in numerous plays, , , and dancing in the "" of her university. In 1942 she inked for joining the "" doing divers performances on stage.

She was cast by Fellini, who picked her after canvassing her photographs, for the radio station for which he was scripting. By 1943 Masina was effectively gaining notice as a radio actress, working beside some popular figures of those years. Masina's first work was "Terziglio", a radio serial which was scripted by Fellini. It was about a young married couple and Massina incarnated Pallina, the wife main character. So, they fell in love and, on , 1943, Masina was married to Fellini although they couldn't have children in tragical circumstances (See below). Despite distancing from acting, Giulietta Masina returned to the university stage for some time, acting with . Her latest stage work was in 1951.

With the help of the professional influence of her husband, whose cinema career had begun to blossom, she was brought to the cinema screen. [ [http://www.allmovie.com/cg/avg.dll?p=avg&sql=2:46201~T1 Giulietta Masina] , at AMG] Indeed, of the entire cinema career of Giulietta Masina, half of the Italian films, the most successful ones, have been either written or directed by her husband.

Giulietta Masina debuted through an uncredited role in (1946) whereas Fellini was credited in its script. Masina's first screen credit was in the 1948 "" film, which was another adaptation of Fellini, and she was opposite to . In 1954 she starred "" of Fellini, which earned the of "Best Foreign Language Film" meaning Masina's international stardom, incarnating the abused wife of a circus strongman (). In 1957 she won the Best Actress Award at the for her portrayal of the title role in Fellini's "" which earned another "Best Foreign Language Film" award of the Academy, as a prostitute who endures life's tragedies with innocence and resilience. Masina's career was severely hit by the critic and office box failure of "The High Life" (1960). Subsequently she became dedicated mostly to attend her own life and marriage. Nonetheless, she filmed again with Fellini in "" (1965), which earned both the award of (1965) and the award of the Golden Globes (1966), as the "Best Foreign Language Film" of the year. In 1969 Masina did her first work in English, in "The Madwoman of Chaillot" beside .

After almost two decades during which she did sporadic works for television only, Giulietta Masina filmed again with Fellini in "", already in 1986. During those years, Masina rejected work offerings, instead to attend the precarious health of her husband. Her last work of cinema was "A Day to Remember" (1991).

In the late 1960s, Giulietta Masina hosted a popular radio show, "Lettere aperte", in which she attended correspondence of her listeners, whereas such letters were published in a book subsequently. Since the 1970s, she was a figure of television as well whereas two productions have been particularly successful, "Eleonora" (1973) and "Camilla" (1976).

Several months after her marriage (1943), Giulietta Masina fell down a flight of stairs and suffered a miscarriage. After her second pregnancy, Pierfederico (nicknamed "Federichino") was born on , , but he died just a month later on , by a respiratory insufficiency. The couple wouldn't attempt again to beget a child.

Giulietta Masina died from a on March 23, 1994, at the age of seventy-three. Fellini had died just five months earlier, on October 31, 1993. They are buried together at cemetery; their tomb is marked by a prow-shaped monument, the work of sculptor .

*
*
* [http://www.italica.rai.it/eng/cinema/biographies/masina.htm Giulietta Masina] , at the .