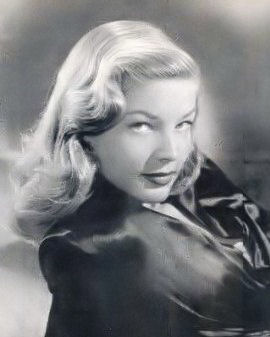 Lauren Bacall (born , ) is an American and stage and model. Known for her husky voice and sultry looks, she became a fashion icon in the 1940s and has continued acting to the present day.

Bacall was born Betty Joan Perske in , the only child of Natalie (née Bacal or Weinstein), a secretary, and William Perske, who worked in sales. [ [http://www.filmreference.com/film/96/Lauren-Bacall.html Lauren Bacall Biography (1924-) ] ] Her parents were ish immigrants, their families having come from , , and .

Bacall studied acting for thirteen years, taking lessons at the . During this time, she became a usher and worked as a fashion model. As Betty Bacall, she made her acting debut on Broadway in 1942, in "Johnny 2 X 4". According to her autobiography, Bacall met her idol at Davis's hotel. Years later, Davis visited Bacall backstage to congratulate her on her performance in "", a musical based on Davis's turn in "".

Bacall became a part-time fashion model. 's wife Nancy spotted her on the March 1943 cover of "" and urged Hawks to have her take a . Hawks invited Bacall to for the audition. He signed her up to a seven-year personal contract, brought her to Hollywood, gave her $100 a week, and began to manage her career. Hawks changed her name to Lauren Bacall. Nancy Hawks took Bacall under her wing. [Sperber and Lax 1997, p. 246.] She dressed Bacall stylishly, and guided the newcomer in matters of elegance, manners, and taste. Bacall's voice was trained to be lower, more masculine, and sexier, which resulted in one of the most distinctive voices in Hollywood. [Sperber and Lax 1997, p. 245.] In the movie, Bacall even takes on Nancy's nickname “Slim”.

During screen tests for "To Have and Have Not" (1944) she was nervous, so to minimize her quivering, she pressed her chin against her chest and to face the camera, tilted her eyes upward. This effect became known as 'The Look', Bacall's trademark. [ [http://www.laurenbacall.com The Official Website of Lauren Bacall - "The Look"] ] Hawks cast her and gave her the first name Lauren. Her performance is acknowledged as one of the most powerful on-screen debuts in film history. [Movie Reviews: [http://www.rottentomatoes.com/m/to_have_and_have_not/ "To Have and Have Not"] . - Rotten Tomatoes]

On the set, who was married to , initiated a relationship with Bacall some weeks into shooting and they began seeing each other.

On a visit to the National Press Club in on , her press agent, chief of publicity at Charlie Enfield, asked the twenty year old Bacall to sit on the which was being played by . The photos caused controversy and made worldwide headlines. [ [http://www.nandotimes.com/nt/images/century/photos/century0275.html Photos Century] . - "Nandotimes.com". - Retrieved: 2007-05-08]

After "To Have and Have Not", Bacall was seen opposite in the critically panned "" (1945).

Bacall turned down scripts she didn't find interesting and thereby earned a reputation for being difficult. Yet for her leads in a string of films she received favorable reviews. In "Young Man with a Horn" (1950), co-starring and , Bacall played a two-faced , with more than a hint of to her character. fact|date=September 2008 This movie is often considered the first big-budget film. [ Trivia: [http://www.imdb.com/title/tt0043153/trivia "Young Man with a Horn" (1950)] . - ]

Bacall starred in the comedy "" in 1953, a runaway hit that saw her teaming up with mega superstars and who were all at the height of their careers. [Box office - Business: [http://www.imdb.com/title/tt0045891/business "How to Marry a Millionaire" (1953)] . - ] Bacall got positive notices for her turn as the witty gold-digger, Schatze Page. [Movie Reviews: [http://www.rottentomatoes.com/m/how_to_marry_a_millionaire/ "How to Marry a Millionaire"] . - Rotten Tomatoes] According to her autobiography, Bacall refused to press her hand- and footprints in the cemented forecourt of at the premiere of the film.

"", directed by in 1956, is now considered a classic tear-jerker. [ [http://www.filmsite.org/writt.html "Written on the Wind" (1956)] . - Filmsite.org] Teaming up with , and , Bacall played a determined soap opera woman. Bacall states in her autobiography that she didn't think much of the role. While struggling at home with Bogart's severe illness (cancer of the esophagus), Bacall starred with in the slapstick comedy "" for rave reviews.Fact|date=October 2007 It was directed by and released in 1957. Bogart succumbed to cancer later that year.

For her work in the Chicago theatre, she won the in 1972 and again in 1984. In 1976, Bacall co-starred with in his last picture, "". The two became friends, even though Wayne was politically conservative and Bacall was a liberal. They had previously been cast together in 1955's "".

In March 2006, she was seen at the 78th Annual introducing a film montage dedicated to the genre. She also made a cameo appearance on "" in April 2006, during which she was punched and robbed by a masked .

In September 2006, Bacall was awarded the first Medal, which recognizes "women whose lives, work and contributions embody the intelligence, drive and independence of the four-time-Oscar-winning actress," by 's Katharine Houghton Hepburn Center. [ [http://www.brynmawr.edu/hepburn/ Bryn Mawr College - Katharine Houghton Hepburn Center ] ] She gave an address at the memorial service of at the in London in June 2007.

Bacall is the spokesperson for the discount chain. Commercials show her in a waiting for the store to open at the beginning of one of their sales events.

On , , Bacall married . Their wedding and honeymoon took place at Malabar Farm, . It was the country home of -winning author , a close friend of Bogart. The wedding was held in the Big House. Bacall was 20 and Bogart was 45. They remained married until Bogart's death from cancer in 1957. Bogart usually called Bacall "Baby," even when referring to her in conversations with other people. During the filming of "" in 1951, Bacall and Bogart became friends of Bogart's co-star and her partner . Bacall also began to mix in non-acting circles, becoming friends with the historian and the journalist . In 1952, she gave campaign speeches for Democratic Presidential contender .

Shortly after Bogart's death in 1957, Bacall had a relationship with singer and actor . She told of (TCM) in an interview that she had ended the romance. However, in her autobiography, she wrote that Sinatra abruptly ended the relationship, having become angry that the story of his proposal to Bacall had reached the press. Bacall and her friend Swifty Lazar had run into the gossip columnist , to whom Lazar had spilled the beans. Sinatra then cut Bacall off and went to Las Vegas.

After Robards, Bacall has not married. In her autobiography "Now", she recalls having a relationship with , her co-star in "Applause".

Bacall has written two autobiographies, "Lauren Bacall By Myself" (1978) and "Now" (1994). In 2005, she re-published the first volume and updated it with an extra chapter. She released it as "By Myself and Then Some".

Bacall is known for speaking out her mind and her sarcastic remarks on her colleagues and peers. She has also delivered some of the most famous lines in movie history.

From "" (1953): "Look at that old fellow, what's his name, in The African Queen. Absolutely crazy about him!" (in reference to her then-husband, Bogart)

Of Mr. Hawks, Bacall told on :
* "He was a . He wanted to mold me. He wanted to control me. And he did until Mr. Bogart got involved."

She told Turner Classic Movies host Robert Osborne:
* "He was a womanizer, he wanted to be in the sack with everybody and I liked that."

She said of Sinatra to Larry King:
* "Well, his attention span was not long, shall we say."

On her political leanings

Bacall was a staunch opponent of along with other figures such as .

From the issue of "Time":
* "When you talk about a great actor, you're not talking about . His whole behavior is so shocking. It's inappropriate and vulgar and absolutely unacceptable to use your private life to sell anything commercially, but, I think it's kind of a sickness."

Quoted in "" regarding his split with while the two women were filming "":
* "Tom had taken off for or some goddamn thing - one of his more ridiculous moves. Tom Cruise is a maniac. I can't understand the way he conducts his life."

Bacall appeared alongside in a photograph printed at the end of an article he wrote titled "I'm No Communist" in the May 1948 edition of "" magazine, [ [http://docs.google.com/View?docid=dg6n6657_103f7bsqj Humphrey Bogart: "I'm no communist", Photoplay, March 1948 ] ] written to counteract negative publicity resulting from his appearance before the . In October 1947, Bacall and Bogart traveled to Washington, DC along with other Hollywood stars, in a group that called itself the . In the article, Bogart distances himself from .

In 1980, played Bacall in the TV movie "Bogie" that was directed by and was based on the by Joe Hymans. played Bogart, and the movie focused primarily upon the disintegration of Bogart's third marriage to , played by , when Bogart met Bacall and began an affair with her.

The conclusion of the cartoon "" (1947) features a blonde likeness of Bacall, addressed by both Bogart and Bugs as "Baby." Bacall is also featured in a cartoon spoof of "To Have and Have Not" called "" (1946), which stars "Laurie Becool" and "Bogey Gocart" in a film within the cartoon.

In the musical "Evita", the song "Rainbow High" has the character of singing "Lauren Bacall me" when she orders her stylist to dress her up for her trip to Europe.

She is mentioned in the outro for the song "Car Jamming" by punk rock act .

She is also mentioned in the Madonna song "Vogue", along with other style icons of past decades.

song "Captain Crash And The Beauty Queen From Mars" mentions her and Bogart.

The hit song "Key Largo" refrains "We had it all, just like Bogie and Bacall."

Bacall was shown on an episode of "", "Smoke on the Daughter." She appeared to Lisa in the form of a ghost.

* : the Bogart and Bacall section
*
* : She is the godmother of the Royal Caribbean International Cruise Ship.

* [http://home.nyc.rr.com/alweisel/premierebacall.htm Idol Chatter: Lauren Bacall]
* [http://robots.cnn.com/TRANSCRIPTS/0505/06/lkl.01.html Interview with Larry King on CNN]
* [http://www.porthalcyon.com/features/200505/ratpack03.shtml Article about the "origin" of the "Rat Pack"] taken mainly from her book "Lauren Bacall, By Myself", (New York: Knopf, 1978)