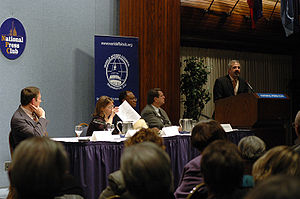 A meeting at the National Press Club

The National Press Club is a professional organization and private social club for journalists. It is located in Washington, D.C. Its membership consists of journalists, former journalists, government information officers, and those considered to be regular news sources. It is well-known for its gatherings with invited speakers from public life.

Founded in 1908, every U.S. president since Theodore Roosevelt has visited the club, and all since Warren Harding have been members. Most have spoken from the club's podium. Others who have appeared at the club include monarchs, prime ministers and premiers, members of Congress, Cabinet officials, ambassadors, scholars, entertainers, business leaders, and athletes. The Club's emblem is the Owl, in deference to wisdom, awareness and long nights spent on the job.

On March 12, 1908, 32 white newspapermen met at the Washington Chamber of Commerce to discuss starting a club for journalists. At the meeting they agreed to meet again on March 29 in the F Street parlor of the Willard Hotel to frame a constitution for the National Press Club. The Club founders laid down a credo which promised "to promote social enjoyment among the members, to cultivate literary taste, to encourage friendly intercourse among newspapermen and those with whom they were thrown in contact in the pursuit of their vocation, to aid members in distress and to foster the ethical standards of the profession."

With $300, the founding members moved into its first club quarters on the second floor of 1205 F Street NW. By 1909, the club had outgrown its new quarters and moved above Rhodes Tavern at the corner of 15th and F Streets. Once again the club outgrew its residence and moved to the Albee Building (formerly Riggs) at 15th and G Streets.

During the Great Depression, the Club struggled financially as it was beginning to be recognized as an influential group. It managed to find additional funding from wealthy individuals.

Regular weekly luncheons for speakers began in 1932 with an appearance by president-elect Franklin D. Roosevelt. Since then the Club has hosted an average of 70 luncheons each year with prominent people. Over the years Nikita Khrushchev, Soong May-ling (Madame Chiang Kai-shek), Golda Meir, Indira Gandhi, Muhammad Ali, Charles de Gaulle, Robert Redford, Boris Yeltsin, Elizabeth Taylor, Nelson Mandela, Yasser Arafat, and the Dalai Lama and Angelina Jolie have all spoken at the club.

Speaking at the National Press Club to mark his retirement, CBS commentator Eric Sevareid called the club the "sanctum sanctorum of American journalists" and said "It's the Westminster Hall, it's Delphi, it's Mecca, the Wailing Wall for everybody in this country having anything to do with the news business; the only hallowed place I know of that's absolutely bursting with irreverence."

The National Press Club also rents space to other organizations.[1]

The Broadcast Operations Center opened in 2006 to provide members and communications professionals access to the tools necessary to keep up with the changing media environment. Located on the 4th floor of the National Press Building, it is a full service video production studio and the conduit for events to reach the rest of the world instantaneously. It provides communications professionals access to webcast and video conference solutions, video production capabilities, global transmission portals, and web enabled multimedia.