National Museum of Women in the Arts

National Museum of Women in the Arts

This article is about a museum in Washington, D.C. For other uses, see NMWA (disambiguation).

The National Museum of Women in the Arts (NMWA), located in Washington, D.C. is the only museum solely dedicated to celebrating women’s achievements in the visual, performing, and literary arts. NMWA was incorporated in 1981 by Wallace and Wilhelmina Holladay. Since opening its doors in 1987, the museum has acquired a collection of more than 4,000 paintings, sculptures, works on paper and decorative art. Highlights of the collection include works by Mary Cassatt, Frida Kahlo, and Élisabeth Louise Vigée-Le Brun. The museum occupies a Masonic Temple, a building listed on the U.S. National Register of Historic Places.

The museum was founded to reform traditional histories of art. It is dedicated to discovering and making known women artists who have been overlooked or unacknowledged, and assuring the place of women in contemporary art. The museum’s founder, Wilhelmina Cole Holladay, and her husband Wallace F. Holladay began collecting art in the 1960s, just as scholars were beginning to discuss the under-representation of women in museum collections and major art exhibitions. Impressed by a 17th-century Flemish still life painting by Clara Peeters that they saw in Europe, they sought out information on Peeters and found that the definitive art history texts referenced neither her nor any other woman artist. They became committed to collecting artwork by women and eventually to creating a museum and research center.

The National Museum of Women in the Arts was incorporated in December 1981 as a private, non-profit museum, and the Holladay donation became the core of the institution’s permanent collection. After purchasing and extensively renovating a former Masonic Temple, NMWA opened in April 1987 with the inaugural exhibition American Women Artists, 1830-1930. To underscore its commitment to increasing the attention given to women in all disciplines, NMWA commissioned Pulitzer Prize-winning composer Ellen Taaffe Zwilich to write Concerto for Two Pianos and Orchestra inspired by five paintings from the permanent collection, for an opening concert. In November 1997, the Elisabeth A. Kasser Wing was opened, adding two new galleries, a larger museum shop, and a reception room. Currently, Director Susan Fisher Sterling heads a staff of more than 30 people.

In 1983, NMWA purchased a landmark 78,810 sq ft (7322 m²) former Masonic temple in the Renaissance Revival style to house its works. Initially drafted by architect Waddy B. Wood, the main building was completed in 1908 in an effort to bring the City Beautiful movement to Washington, D.C. Notably, Wood was recognized as being especially supportive of women architects during his lifetime. Until the 1920s, the fifth floor housed George Washington University’s Law Library. The original structure is on the D.C. Inventory List of Historic Sites as well as the National Register of Historic Places. Throughout the 20th century, it was used as a movie theater. After extensive renovations that included the addition of the two dramatic marble stairways linking the first floor and mezzanine, the museum opened to the public on April 7, 1987. The Elizabeth A. Kasser Wing opened November 8, 1997 making the entire facility 84,110 sq ft (7814 m²). 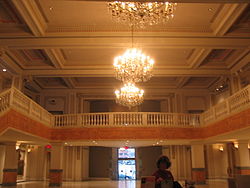 Interior of the main floor

Wilhelmina Cole Holladay is the founder and chair of the Board of the National Museum of Women in the Arts. Since her discovery that women artists have historically been omitted from collegiate art history texts, Wilhelmina Cole Holladay has made it her mission to bring to the forefront the accomplishments of women through collecting, exhibiting and researching women artists of all nationalities and time periods.

Holladay created individual committees of over 1,000 volunteers from 27 states and 7 countries, to give educational opportunities to children through collaborations with schools and other community groups (e.g. Girl Scouts of the USA), as well as provided opportunities for adults to participate and encourage art in local communities across the globe.

Wilhelmina Cole Holladay's interest in art was sparked as a student at Elmira College in New York, where she studied art history, followed by graduate work at the University of Paris. She is listed in Who's Who of American Women, Who's Who in American Art, Who's Who in the World, and she holds many honorary degrees and achievement awards for her work in the arts community. In 2006 she received the National Medal of Arts from the United States and the Légion d'honneur from the French government. In 2007 Holladay received the Gold Medal for the Arts from the National Arts Club in New York City.

See also: Les Trois Grâces and Nana on a Dolphin

By 2015 a selection of sculptures will be installed along New York Avenue from 13th Street to 9th Street, in the heart of Mount Vernon Square. The museums efforts are in part to bring "character" to an area where "there is a lot of good stuff going on," due to revitalization programs in the neighborhood. de Saint Phalle's works, four in total, are the first in a series of installations.[2]

The museums installation of de Saint Phalle's iconic pop art works are meant to be contrasting to the traditional sculpture that graces the streets and squares of Washington. All five major median strips will eventually be made into "sculpture islands," as described by National Museum of Women in the Art's director Susan Fisher Sterling. Another inspiration for the project comes from the lack of innovative contemporary art in Washington, encouraging the evolution of an area that is in need of becoming hip and vibrant.[2]

The project has been sponsored by Medda Gudelsky, the D.C. Downtown B.I.D., the Philip L. Graham Fund, the Homer and Martha Gudelsky Family Foundation, members of the museum, the D.C. Department of Transportation, among others.[3]

These works will remain up for one year, before being returned to the artists foundation.[4] 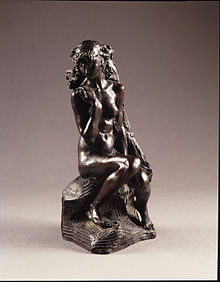 The collection currently contains more than 4,000 works in a variety of styles and media, spanning from the 16th century to present day. Among the earliest works is Lavinia Fontana’s Portrait of a Noblewoman, ca. 1580. There are also a number of special collections, including 18th century botanical prints, works by British and Irish women silversmiths from the 17th–19th centuries,[5] and more than 1,000 unique and limited edition artists’ books.[6]

The Library and Research Center (LRC) provides researchers with information about women visual artists from all time periods and nationalities. It is open to scholars, students, researchers, curators, museum professionals, and the general public. The LRC collection includes 18,500 volumes of books and exhibition catalogues, 50 periodical titles, and research files on 18,000 individual women artists. These files include resumes, correspondence, reproductions, articles, and other ephemeral materials. The Arts and Entertainment Network Media Library holds approximately 500 videos, DVDs, audio tapes, and other audiovisual materials, including examples of video art, interviews with women artists, documentaries, and films directed by women.

Also available to researchers are The Nelleke Nix and Marianne Huber Collection: The Frida Kahlo Papers consists of more than 360 unpublished letters, postcards, notes, clippings, printed matter, and drawings relating to the artist’s life and work.

In spring 2007, the LRC launched Clara: Database of Women Artists®, a user-friendly searchable interface for biographic information on close to 18,000 historic and contemporary women artists from around the world. Integrated within the NMWA Web site, Clara is accessible to users around the world.

NMWA hosts educational programs for all age groups to teach the public about the artistic accomplishments of women. Programs include monthly Family Days with free museum admission, and Role Model Workshops that connect teenagers with accomplished women working in the art world. Member days include curator- and artist-led tours. The Education Department is also involved in various outreach programs to area educators. For example, the 2010 "Teachers Connect" program was designed around the promotion of NMWA's Art, Books, and Creativity curriculum.

The museum is located at 1250 New York Avenue and H Street N.W. The closest Washington Metro stations are Metro Center or McPherson Square stations. The museum is open Monday–Saturday 10 a.m.–5 p.m. and Sundays noon–5 p.m. Admission is $10 for adults, $8 for students and visitors 65 and over, and free for members and visitors 18 and under. Admission is free to all on the first Sunday of every month. The NMWA Museum Shop is open the same hours at the Museum.