Remedios Varo Uranga (December 16, 1908 - October 8, 1963) was a Spanish-Mexican, para-surrealist painter and anarchist. She was born María de los Remedios Varo Uranga in Anglès, Girona, Spain in 1908. During the Spanish Civil War she fled to Paris where she was greatly influenced by the surrealist movement. She met her second husband (the first was Gerardo Lizarraga, a painter), the French surrealist poet Benjamin Péret in Barcelona. There she was a member of the art group Logicophobiste. They were introduced through a mutual friendship with the Surrealist artist Oscar Dominguez.

In 1937, she moved to Paris with Péret, sealing herself from any return to Franco's Spain since she had republican ties. She was forced into exile from Paris during the Nazi occupation of France and moved to Mexico City at the end of 1941. She initially considered Mexico a temporary haven, but would remain in Latin America for the rest of her life.

In Mexico, she met native artists such as Frida Kahlo and Diego Rivera, but her strongest ties were to other exiles and expatriates, notably the English painter Leonora Carrington and the French pilot and adventurer, Jean Nicolle. Her third, and last, marriage was to Walter Gruen, an Austrian who had endured concentration camps before escaping Europe. Gruen believed fiercely in Varo, and he gave her the support that allowed her to fully concentrate on her painting.

After 1949 Varo developed her mature style, which remains beautifully enigmatic and instantly recognizable. She often worked in oil on masonite panels she prepared herself. Although her colors have the blended resonance of the oil medium, her brushwork often involved many fine strokes of paint laid closely together - a technique more reminiscent of egg tempera. She died at the height of her career from a heart-attack in Mexico City in 1963.

Her work continues to achieve successful retrospectives at major sites in Mexico and the United States. 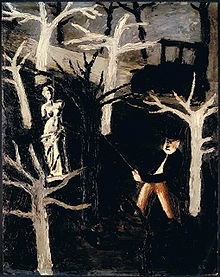 Work of Remedios Varo painted in Barcelona around 1936. It could be the painting entitled Accidentiality of the Woman - Violence (original title in Catalan: Accidentalitat de la Dona - Violència) that was a part of the Exposició Logicofobista (Logicofobistic Exhibition) in Barcelona in 1936. (Private collection)

The allegorical nature of much of Varo's work especially recalls the paintings of Hieronymus Bosch, and some critics, such as Dean Swinford, have described her art as "postmodern allegory," much in the tradition of Irrealism.

Varo was also influenced by styles as diverse as those of Francisco Goya, El Greco, Picasso, and Braque. While André Breton was a formative influence in her understanding of Surrealism, some of her paintings bear an uncanny resemblance to the Surrealist creations of the modern Greek-born Italian painter Giorgio de Chirico.

In Mexico, she was influenced by pre-Columbian art.

Varo's painting The Lovers served as inspiration for some of the images used by Madonna in the music video for her 1995 single "Bedtime Story".

Varo was influenced by a wide range of mystic and hermetic traditions, both Western and non-Western. She turned with equal interest to the ideas of C. G. Jung as to the theories of G. I. Gurdjieff, P. D. Ouspensky, Helena Blavatsky, Meister Eckhart, and the Sufis, and was as fascinated with the legend of the Holy Grail as with sacred geometry, alchemy and the I-Ching. She saw in each of these an avenue to self-knowledge and the transformation of consciousness. 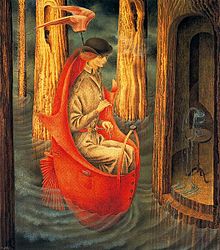 Exploration of the Source of the Orinoco River, 1959.

Interpretations to her body of work

The male surrealists almost never saw their female counterparts as capable artists; therefore, the female surrealists were forced to find ways of working within the restrictions of the surrealist misconceived definition of woman, while still trying to refute it. Varo does this through her images of women in confined spaces.

Later in her career, Varo’s characters developed into her emblematic androgynous figures with heart-shaped faces, large and lonely eyes, and the aquiline noses that mimic her own features. The sense of isolation was achieved again and again as Varo secluded her characters in one environment or another, conveying an extraordinarily powerful message to those who paid attention long enough to notice it. Her use of seemingly autobiographical characters—confined and held captive by forces unknown—could be seen as exposing the dynamic of superiority that is inherent in male surrealist’s misuse of women as muses. It could be interpreted that her paintings are responses to the marginalization of women; portrayals of the characteristic misogynist treatment of women artists by the male surrealists by likening her characters and chimerical figures to prisoners.

When Remedios Varo died of a heart attack in Mexico City in 1963, the art world lamented their loss in her sudden death. Her mature paintings, fraught with arguably feminist meaning, are predominantly from the last few years of her life.

Since then, Remedios Varo has been quite forgotten by art history. It is possible that Varo’s name is often unrecognized is because she was a woman amongst a movement governed by men. It is probable that art history as missed out on something consequential because the culture that Varo lived in operated for so long on the belief that women were not the equivalent of men. The majority of western civilization did not think—and often still does not put into practice the belief that —women have been capable artists. Some scholars have attached the sentiment expressed by Linda Nochlin in her famous essay “Why Have There Been No Great Female Artists,” that “the question of women's equality —in art as in any other realm— devolves neither upon the relative benevolence or ill-will of individual men, nor the self-confidence or abjectness of individual women, but rather on the very nature of our institutional structures themselves, and the view of reality which they impose on the human beings who are part of them.”

The paintings of androgynous characters that share Varo’s facial features, mythical creatures, the misty swirls and eerie distortions of perspective are characteristic of Varo’s unique brand of surrealism. Varo has painted images of isolated, androgynous, auto-biographical figures to highlight the captivity of the true woman. While her paintings have been interpreted as more surrealist canvases that are the product of her passion for mysticism and alchemy, or as auto-biographical narratives, her work carries implications far more significant.

Her work is the attempt at calling attention to the fact that all women have been, falsely and forcefully, repressed and rendered one-dimensional. Though she can be considered to be a surrealist—a movement that is notorious for marginalizing women and praising the theoretical feminine while simultaneously neglecting the independence of actual women—the whole of art history has neglected the significance of the work of women artists.

*Linda Nochlin, "Why Have There Been No Great Women Artists?"