A pioneer of bebop, Roach went on to work in many other styles of music, and is generally considered alongside the most important drummers in history.[1][2] He worked with many famous jazz musicians, including Coleman Hawkins, Dizzy Gillespie, Charlie Parker, Miles Davis, Duke Ellington, Thelonious Monk, Charles Mingus, Billy Eckstine, Stan Getz, Sonny Rollins and Clifford Brown.

Roach also led his own groups, and made numerous musical statements relating to the civil rights movement of African Americans.

Roach was born in the Township of Newland, Pasquotank County, North Carolina, which borders the southern edge of the Great Dismal Swamp, to Alphonse and Cressie Roach. Many confuse this with Newland Town in Avery County. Although Roach's birth certificate lists his date of birth as January 10, 1924,[3] Roach has been quoted by Phil Schaap as having stated that his family believed he was born on January 8, 1925. Roach's family moved to the Bedford-Stuyvesant neighborhood of Brooklyn, New York when he was 4 years old. He grew up in a musical home, his mother being a gospel singer. He started to play bugle in parade orchestras at a young age. At the age of 10, he was already playing drums in some gospel bands. As an eighteen year-old fresh out of Boys' High School in Brooklyn, (1942) he was called to fill in for Sonny Greer, and play with the Duke Ellington Orchestra performing at the Paramount Theater.

In 1942, Roach started to go out in the jazz clubs of the 52nd Street and at 78th Street & Broadway for Georgie Jay's Taproom (playing with schoolmate Cecil Payne).[4]

Roach's most significant innovations came in the 1940s, when he and jazz drummer Kenny Clarke devised a new concept of musical time. By playing the beat-by-beat pulse of standard 4/4 time on the "ride" cymbal instead of on the thudding bass drum, Roach and Clarke developed a flexible, flowing rhythmic pattern that allowed soloists to play freely. The new approach also left space for the drummer to insert dramatic accents on the snare drum, "crash" cymbal and other components of the trap set.

By matching his rhythmic attack with a tune's melody, Roach brought a newfound subtlety of expression to his instrument. He often shifted the dynamic emphasis from one part of his drum kit to another within a single phrase, creating a sense of tonal color and rhythmic surprise.[1] The idea was to shatter musical conventions and take full advantage of the drummer's unique position. "In no other society", Roach once observed, "do they have one person play with all four limbs."[5]

While that approach is common today, when Clarke and Roach introduced the new style in the 1940s it was a revolutionary musical advance. "When Max Roach's first records with Charlie Parker were released by Savoy in 1945," jazz historian Burt Korall wrote in the Oxford Companion to Jazz, "drummers experienced awe and puzzlement and even fear." One of those awed drummers, Stan Levey, summed up Roach's importance: "I came to realize that, because of him, drumming no longer was just time, it was music."[1]

He was one of the first drummers (along with Kenny Clarke) to play in the bebop style, and performed in bands led by Dizzy Gillespie, Charlie Parker, Thelonious Monk, Coleman Hawkins, Bud Powell, and Miles Davis. Roach played on many of Parker's most important records, including the Savoy November 1945 session, a turning point in recorded jazz. 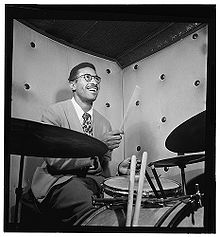 Roach studied classical percussion at the Manhattan School of Music from 1950–53, working toward a Bachelor of Music degree (the School was to award him an Honorary Doctorate in 1990).

In 1952, Roach co-founded Debut Records with bassist Charles Mingus. This label released a record of a May 15, 1953 concert, billed as 'the greatest concert ever', which came to be known as Jazz at Massey Hall, featuring Charlie Parker, Dizzy Gillespie, Bud Powell, Mingus and Roach. Also released on this label was the groundbreaking bass-and-drum free improvisation, Percussion Discussion.[6]

In 1954, he formed a quintet featuring trumpeter Clifford Brown, tenor saxophonist Harold Land, pianist Richie Powell (brother of Bud Powell), and bassist George Morrow, though Land left the following year and Sonny Rollins soon replaced him. The group was a prime example of the hard bop style also played by Art Blakey and Horace Silver. Tragically, this group was to be short-lived; Brown and Powell were killed in a car accident on the Pennsylvania Turnpike in June 1956. The first album Roach recorded after their deaths was Max Roach + 4. After Brown and Powell's deaths, Roach continued leading a similarly configured group, with Kenny Dorham (and later the short-lived Booker Little) on trumpet, George Coleman on tenor and pianist Ray Bryant. Roach expanded the standard form of hard-bop using 3/4 waltz rhythms and modality in 1957 with his album Jazz in 3/4 time. During this period, Roach recorded a series of other albums for the EmArcy label featuring the brothers Stanley and Tommy Turrentine.[7]

In 1955, he was the drummer for vocalist Dinah Washington at several live appearances and recordings. Appearing at the Newport Jazz Festival with her in 1958 which was filmed and the 1954 live studio audience recording of Dinah Jams, considered to be one of the best and most overlooked vocal jazz albums of its genre.[8]

In 1960 he composed the We Insist! - Freedom Now suite with lyrics by Oscar Brown Jr., after being invited to contribute to commemorations of the hundredth anniversary of Abraham Lincoln's Emancipation Proclamation. Using his musical abilities to comment on the African-American experience would be a significant part of his career. Unfortunately, Roach suffered from being blacklisted by the American recording industry for a period in the 1960s.[9] Roach though did manage to record the Money Jungle album with Mingus and Duke Ellington in 1962. This is generally regarded as one of the very finest trio albums ever made.[10]

In 1966, with his album Drums Unlimited (which includes several tracks that are entirely drums solos) he demonstrated that drums can be a solo instrument able to play theme, variations, rhythmically cohesive phrases. He described his approach to music as "the creation of organized sound."[9] 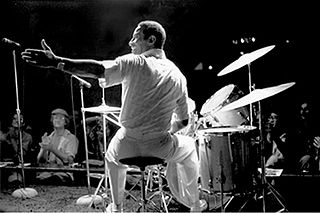 In the early 1980s, he began presenting entire concerts solo, proving that this multi-percussion instrument could fulfill the demands of solo performance and be entirely satisfying to an audience. He created memorable compositions in these solo concerts; a solo record was released by Bay State, a Japanese label, just about impossible to obtain. One of these solo concerts is available on video, which also includes a filming of a recording date for "Chattahoochee Red," featuring his working quartet, Odean Pope, Cecil Bridgewater and Calvin Hill.

He embarked on a series of duet recordings. Departing from the style of presentation he was best known for, most of the music on these recordings is free improvisation, created with the avant-garde musicians Cecil Taylor, Anthony Braxton, Archie Shepp, and Abdullah Ibrahim. He created duets with other performers: a recorded duet with the oration by Martin Luther King, "I Have a Dream"; a duet with video artist Kit Fitzgerald, who improvised video imagery while Roach spontaneously created the music; a classic duet with his life-long friend and associate Dizzy Gillespie; a duet concert recording with Mal Waldron.

He wrote music for theater, such as plays written by Sam Shepard, presented at La Mama E.T.C. in New York City.

He found new contexts for presentation, creating unique musical ensembles. One of these groups was "The Double Quartet." It featured his regular performing quartet, with personnel as above, except Tyrone Brown replacing Hill; this quartet joined with "The Uptown String Quartet," led by his daughter Maxine Roach, featuring Diane Monroe, Lesa Terry and Eileen Folson.

Roach presented his music with orchestras and gospel choruses. He performed a concerto with the Boston Symphony Orchestra. He wrote for and performed with the Walter White gospel choir and the John Motley Singers. Roach performed with dancers: the Alvin Ailey American Dance Theater, the Dianne McIntyre Dance Company, the Bill T. Jones/Arnie Zane Dance Company.

Roach surprised his fans by performing in a hip hop concert, featuring the artist-rapper Fab Five Freddy and the New York Break Dancers. He expressed the insight that there was a strong kinship between the outpouring of expression of these young black artists and the art he had pursued all his life.[11]

Not content to expand on the musical territory he had already become known for, Roach spent the decades of the 1980s and 1990s continually finding new forms of musical expression and presentation. Though he ventured into new territory during a lifetime of innovation, he kept his contact with his musical point of origin. He performed with the Beijing Trio, with pianist Jon Jang and erhu player Jeibing Chen. His last recording, Friendship, was with trumpet master Clark Terry, the two long-standing friends in duet and quartet. His last performance was at the 50th anniversary celebration of the original Massey Hall concert, in Toronto, where he performed solo on the hi-hat.[12]

In 1994, Roach also appeared on Rush drummer Neil Peart's Burning For Buddy performing "The Drum Also Waltzes", Part 1 and 2 on Volume 1 of the Volume 2 series during the 1994 All-Star recording sessions.[13] 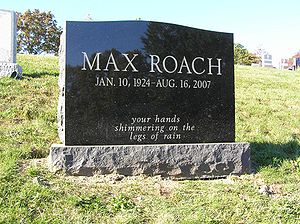 The grave of Max Roach

Max Roach died in the early morning on August 16, 2007 in Manhattan.[14] He was survived by five children: sons Daryl and Raoul, and daughters Maxine, Ayo and Dara. Over 1,900 people attended his funeral at Riverside Church in Manhattan, New York City on August 24, 2007. Max Roach was interred at the Woodlawn Cemetery, Bronx, NY.

In a funeral tribute to the Roach, then-Lieutenant Governor of New York David Paterson compared the musician's courage to that of Paul Robeson, Harriet Tubman and Malcolm X, saying that "No one ever wrote a bad thing about Max Roach's music or his aura until 1960, when he and Charlie Mingus protested the practices of the Newport Jazz Festival."[15]

Two children, son Daryl Keith and daughter Maxine, were born from his first marriage with Mildred Roach. In 1956 he met singer Barbara Jai (Johnson) and had another son, Raoul Jordu. He continued to play as a freelance while studying composition at the Manhattan School of Music. He graduated in 1952. During the period 1962–1970, Roach was married to the singer Abbey Lincoln, who had performed on several of Roach's albums. Twin daughters, Ayodele Nieyela and Dara Rashida, were later born to Roach and his third wife, Janus Adams Roach. He has four grandchildren, Kyle Maxwell Roach, Kadar Elijah Roach, Maxe Samiko Hinds and Skye Sophia Sheffield. Long involved in jazz education, in 1972 he joined the faculty of the University of Massachusetts at Amherst. In the early 2000s, Roach became less active from the onset of hydrocephalus-related complications.

From the 1970s through the mid-1990s Roach taught at the University of Massachusetts Amherst.[16]

He was given a MacArthur Foundation "genius" grant in 1988, cited as a Commander of the Order of Arts and Letters in France (1989),[17] twice awarded the French Grand Prix du Disque, elected to the International Percussive Art Society's Hall of Fame and the Downbeat Magazine Hall of Fame, awarded Harvard Jazz Master, celebrated by Aaron Davis Hall, given eight honorary doctorate degrees, including degrees awarded by Medgar Evers College, CUNY, the University of Bologna, Italy and Columbia University.[18] While spending the later years of his life at the Mill Basin Sunrise assisted living home, in Brooklyn, Max was honored with a proclamation honoring his musical achievements by Brooklyn borough president Marty Markowitz.[19]

In 1986 the London borough of Lambeth named a park in Brixton after him.[20][21] - Roach was able to officially open it when he visited the UK that year.