A drummer is a musician who is capable of playing drums, which includes but is not limited to a drum kit ("drum set" or "trap set", including but not limited to cymbals) and accessory based hardware which includes an assortment of pedals and standing support mechanisms, marching percussion and/or any musical instrument that is struck within the context of a wide assortment of musical genres. The term percussionist applies to a musician who performs struck musical instruments of numerous diverse shapes, sizes and applications. Most contemporary western ensembles bands for Rock, Pop, Jazz, R&B etc. include a drummer within the context of its music based ensemble for purposes including but not limited to timekeeping, and artist based applications deemed appropriate towards the elevation of a prescribed music based aesthetic. Most drummers of this particular designation work within the context of a larger contingent (aka rhythm section) that may also include, keyboard (a percussion instrument) and/or guitar, auxiliary percussion (often of non western origin) and bass (bass viol or electric). Said ensembles may also include melodic based mallet percussion including but not limited to: vibraphone, marimba and/or xylophone. The rhythm section, being the core metronomic foundation with which other melodic instruments, including voices, may present the harmonic/melodic portion of the material. 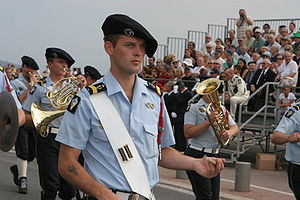 Drummer of the French Chasseurs alpins

Drummers are no longer employed in battle, but their ceremonial duties continue. Typically buglers (wind instrument)and drummers mass under a sergeant-drummer and during marches alternately perform with the regiment and/or battalion ensembles.

Military based musical percussion traditions were not limited exclusively to the western world. When Emir Osman I was appointed commander of the Turkish army on the Byzantine border in the late 13th century, he was symbolically installed via a handover of musical instruments by the Seldjuk sultan. During the Ottoman Empire, size of a military band reflected the rank of its commander in chief: the largest reserved for the Sultan (viz. his Grand Vizier when taking the field). It included various percussion instruments, often adopted in European military music (as 'Janissary music') The pitched bass drum is still known in some languages as the Turkish Drum. Alternatively, in old English, Tabert is champion of the people, or great leader, i.e. a great drummer.

Military forces especially those of the British Commonwealth, battalions or regiments often consisted of a "pipes and drums" band ("the band') consisting of bagpipes and drummers. These bands are often employed as stretcher bearers or medics on the battlefield. 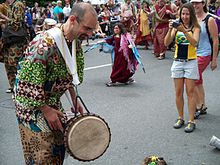 A drummer in a parade

Is a genre of marching ensemble descended from it military drummers and can be arranged as a performance of a drum, a group of drummers, and as a part of a larger marching band. Their uniforms will often have a military style and a fancy hat. In recent times, it is more common to see drummers in parades wearing costumes with an African, Asian, Latin, Native American, or tribal look and sound.

Beginning in the 20th century, drummers achieved an elevated distinction as stars of the entertainment industry with swing era drummer Gene Krupa often portrayed among the best known among the varied show business related genres. Krupa's ongoing popularity created a fortuitous stereotype, evolved during rock music eras, where drummers were often portrayed as glamorous personas sitting behind large drum kits on gargantuan arena stages, although Krupa's periodic legal troubles did create the occasional perception of drummers as less than responsible within the context of prescribed behaviors, a stereotype with as many detractors as supporters.