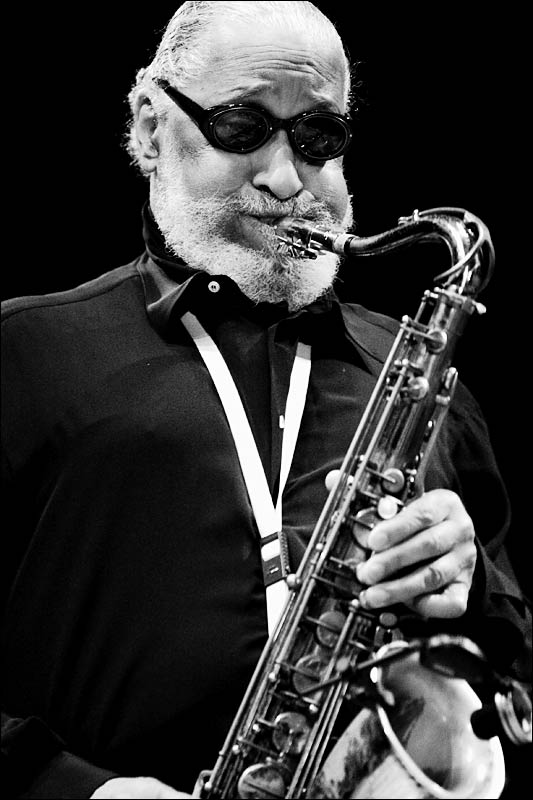 Rollins started as a , changed to , and finally switched to tenor in 1946. During his high-school years, he played in a band with other future jazz legends and . He was first recorded in 1949 with — in the same year he recorded with and . In his recordings through 1954, he played with performers such as , and . [Columbia Encyclopedia http://www.encyclopedia.com/doc/1E1-RollinsS.html]

In 1950, Rollins was arrested for and given a sentence of three years. He spent 10 months in jail before he was released on . In 1952 he was arrested for violating the terms of his parole by using . Rollins was assigned to what was then the USA's only assistance for drug addicts: "Narco", "The Farm", aka . There he was a volunteer for a then experimental therapy and was able to 'kick'- or endure an opiate withdrawal. Rollins himself initially feared sobriety would impair his musicianship- until he went on to greater success.

As a saxophonist he had initially been attracted to the jump and R&B sounds of performers like , but soon became drawn into the mainstream tenor saxophone tradition. Joachim Berendt has described this tradition as sitting between the two poles of the strong sonority of and the light flexible phrasing of , which did so much to inspire the fleet improvisation of be-bop in the 1950s. [cite book | last=Berendt|first=Joachim| title=The Jazz Book | publisher=Paladin| date=1976|pages=229] Rollins drew the two threads together as a fluid post-bop improviser with a sound as strong and resonant as any since Hawkins himself.

Rollins began to make a name for himself as he recorded with the and with in 1951, recording his composition "Oleo" among others. In 1953 and 1954 he worked with , recording "Thelonius Monk and Sonny Rollins", which includes "I Want to Be Happy" and "Friday the 13th". Rollins then joined the &ndash; quintet in 1955 (recordings made by this group have been released as "Sonny Rollins Plus 4" and "Clifford Brown and Max Roach at Basin Street"; Rollins also plays on half of "More Study in Brown"), and after Brown's death in 1956 worked mainly as a leader. By this time he had begun his career with , which released many of his best-known albums, although at the height of his career in the 1950s Rollins was also recording regularly for Blue Note, Riverside and the Los Angeles label Contemporary.

His widely acclaimed album, "", was recorded on , at 's studio in New Jersey, with on piano, former Jazz Messengers bassist and his favorite drummer . This was Rollins' third recording as a leader and it included his best-known composition "St. Thomas", a Caribbean calypso based on a tune sung to him by his mother in his childhood, as well as the fast bebop number "Strode Rode", and "Moritat" (the composition also known as "").

In 1956 he also recorded "", using ' group — pianist , bassist , and drummer . The title track is the only recording of Rollins with , who was also in Davis' group.

At the end of the year Rollins recorded a set for Blue Note with on trumpet, on piano, on bass, and Rollins' long-term collaborator Max Roach on drums. This has been released as "Sonny Rollins Volume One" (the superstar session "Volume Two" recorded the following year has consistently outsold it).

In 1957 he pioneered the use of bass and drums (without piano) as accompaniment for his saxophone solos. This texture came to be known as "strolling". Two early tenor/bass/drums trio recordings are "Way Out West" (Contemporary, 1957) and "" (Blue Note, 1957). Throughout his career, Rollins used the technique, even backing bass and drum solos with sax licks. "Way Out West" was so named because it included songs such as "Wagon Wheels" and "I'm an Old Cowhand" and was recorded for a Californian label with Los Angeles based drummer . The Village Vanguard CD consists of two sets, a matinee with bassist Donald Bailey and drummer and then the evening set with and .

By this time, Rollins had become well-known for taking relatively banal or unconventional material (such as "There's No Business Like Show Business" on "Work Time", "I'm an Old Cowhand", and later "Sweet Leilani" on the Grammy-winning CD "This Is What I Do") and turning it into a vehicle for improvisation. He also is quite well-known as a composer; a number of his tunes (including "St. Thomas", "Doxy", "Oleo" and "") have become standards.

1957's "" saw him working with a piano again, in this case but one of the most highly regarded tracks is a saxophone/drum duet ("Surrey with the Fringe on Top" with ). Also that year he recorded for Blue Note with a star-studded line-up of on trombone, or Thelonious Monk on piano and drummer (released as "Sonny Rollins Volume 2").

In 1958 Rollins recorded another landmark piece for saxophone, bass and drums trio: "The Freedom Suite". His original sleeve notes said: "How ironic that the Negro, who more than any other people can claim America's culture as his own, is being persecuted and repressed; that the Negro, who has exemplified the humanities in his very existence, is being rewarded with inhumanity." [cite web|last=Bowden| first=Marshall| title =Freedom Suite Revisited| url=http://www.jazzitude.com/freedom_suite.htm|accessdate = 2007-07-23]

The title track is a 19-minute improvised bluesy suite, much of it interaction between Rollins' saxophone and the drums of , some of it very tense. However the album was not all politics, the other side was workouts of popular show tunes. The LP was only briefly available in its original form, before the record company repackaged it as "Shadow Waltz", the title of another piece on the record. The bassist was .

Finally in 1958 he made one more studio album before taking a three-year break from recording. This was another session for Los Angeles based Contemporary Records and saw Rollins recording an esoteric mixture of tunes including "Rock-A-Bye Your Baby With A Dixie Melody" with a West Coast group made up of pianist , guitarist , bassist and drummer .

By 1959, Rollins was frustrated with what he perceived as his own musical limitations and took the first &ndash; and most famous &ndash; of his musical sabbaticals. To spare a neighboring expectant mother the sound of his practice routine, Rollins ventured to the to practice. Upon his return to the jazz scene in 1962 he named his "comeback" album "The Bridge" at the start of a contract with , recorded with a quartet featuring guitarist Jim Hall and still no piano. The rhythm section was on drums and bassist . This became one of Rollins' best-selling records.

The contract with RCA lasted until 1964 and saw Rollins remain one of the most adventurous musicians around. Each album he recorded differed radically from the previous one. Rollins explored Latin rhythms on "What's New", tackled the avant-garde on "Our Man in Jazz", and re-examined standards on "Now's the Time".

He then provided the soundtrack to the 1966 version of "Alfie". His 1965 residency at Ronnie Scott's legendary jazz club has recently emerged on CD as "Live in London", a series of releases from the Harkit label; they offer a very different picture of his playing from the studio albums of the period. (These are unauthorized releases, and Rollins has responded by "bootlegging" them himself and releasing them on his website.)

Frustrated once again, Rollins took his most recent sabbatical to study yoga, meditation, and Eastern philosophies. When he returned in 1972, it was clear that he had become enamored with R&B, pop, and funk rhythms. His bands throughout the 1970s and 1980s featured electric guitar, electric bass, and usually more pop- or funk-oriented drummers. For most of this period he recorded for and the compilation " Silver City: A Celebration of 25 Years on Milestone" contains a selection from these years. The 70s and 80s were not all disco though and it was during this period that Rollins' passion for unaccompanied saxophone solos came to the forefront. In 1985 he released his "Solo Album."

Rollins' most famous appearance to rock music fans was his appearance on the 1981 album "", on which he plays saxophone on "Slave", "" and possibly "Neighbours".

In addition to the Stones album, Rollins has another link to rock fans. The Blue Note cover art to his "Sonny Rollins Vol. 2" set was replicated by Joe Jackson for his 1984 A&M album "Body and Soul," which prominently features sax and trumpet.

:"Over and over, decade after decade, from the late seventies through the eighties and nineties, there he is, Sonny Rollins, the saxophone colossus, playing somewhere in the world, some afternoon or some eight o'clock somewhere, pursuing the combination of emotion, memory, thought, and aesthetic design with a command that allows him to achieve spontaneous grandiloquence. With its brass body, its pearl-button keys, its mouthpiece, and its cane reed, the horn becomes the vessel for the epic of Rollins' talent and the undimmed power and lore of his jazz ancestors."

Rollins was presented with a for lifetime achievement in 2004, but sadly that year also saw the death of his wife Lucille.

On , , the 71-year-old Rollins, who lived several blocks away, heard the World Trade Center collapse, and was forced to evacuate his apartment, with only his saxophone in hand. Although he was shaken, he traveled to Boston five days later to play a concert at the . The live recording of that performance was released on CD in 2005, "Without a Song: The 9/11 Concert", which won the 2006 Grammy for Jazz Instrumental Solo for Sonny's solo on the song "Why Was I Born?". He won an earlier Grammy for the CD "This Is What I Do". In 2006, Rollins went on to complete a Readers Poll triple win for: "Jazzman of the Year", "#1 Tenor Sax Player", and "Recording of the Year" for the CD "Without a Song" (The 9/11 Concert)". The band that year was led by his nephew, trombonist , and included bassist , pianist , percussionist , and drummer .

After a highly successful Japanese tour Rollins returned to the recording studio for the first time in five years to record the Grammy-nominated CD "Sonny, Please" (2006). The CD title is derived from one of his late wife's favorite phrases. The album was released on Rollins' own label, Doxy Records, following his departure from after many years and was produced by Clifton Anderson. Rollins' band at this time, and on this album, included , guitarist , drummer Steve Jordan and .

The city of officially named after Rollins in honor of his achievements and contributions to the world of jazz. In 2007 he received the prestigious in Stockholm, Sweden, together with and award Rollins a Doctor of Music, "honoris causa", for his contributions to jazz music.

Rollins performed at on September 18, 2007, in commemoration of the 50th anniversary of his first performance there.

*"Saxophone Colossus" (1986). Directed by .
*EPK for "Sonny Please" [http://www.sonnyplease.com]
*Soundtrack for the classic sixties film "Alfie" composed by Rollins. The album of this name was an American recording with arrangements by .
*The Sonny Rollins Podcast [http://www.sonnyrollins.com/podcasts.php]
*50th Anniversay Concert Video [http://youtube.com/watch?v=izzYRK6qCdA]
*Thelonious and Theodore [http://youtube.com/watch?v=SFa0-DEhLC0]