The Museum of Modern Art (MoMA) is an art museum in Midtown Manhattan in New York City, on 53rd Street, between Fifth and Sixth Avenues. It has been important in developing and collecting modernist art, and is often identified as the most influential museum of modern art in the world.[1] The museum's collection offers an unparalleled overview of modern and contemporary art,[2] including works of architecture and design, drawings, painting, sculpture, photography, prints, illustrated books and artist's books, film, and electronic media.

MoMA's library and archives hold over 300,000 books, artist books, and periodicals, as well as individual files on more than 70,000 artists. The archives contain primary source material related to the history of modern and contemporary art. It also houses a restaurant, The Modern, run by Alsace-born chef Gabriel Kreuther.[3]

The idea for The Museum of Modern Art was developed in 1928 primarily by Abby Aldrich Rockefeller (wife of John D. Rockefeller Jr.) and two of her friends, Lillie P. Bliss and Mary Quinn Sullivan.[4] They became known variously as "the Ladies", "the daring ladies" and "the adamantine ladies". They rented modest quarters for the new museum in rented spaces in the Heckscher Building at 730 Fifth Avenue (corner of Fifth Avenue and 57th Street) in Manhattan, and it opened to the public on November 7, 1929, nine days after the Wall Street Crash. Abby had invited A. Conger Goodyear, the former president of the board of trustees of the Albright Art Gallery in Buffalo, New York, to become president of the new museum. Abby became treasurer. At the time, it was America's premier museum devoted exclusively to modern art, and the first of its kind in Manhattan to exhibit European modernism.[5]

Goodyear enlisted Paul J. Sachs and Frank Crowninshield to join him as founding trustees. Sachs, the associate director and curator of prints and drawings at the Fogg Art Museum at Harvard University, was referred to in those days as a collector of curators. Goodyear asked him to recommend a director and Sachs suggested Alfred H. Barr Jr., a promising young protege. Under Barr's guidance, the museum's holdings quickly expanded from an initial gift of eight prints and one drawing. Its first successful loan exhibition was in November 1929, displaying paintings by Van Gogh, Gauguin, Cézanne, and Seurat.[6]

First housed in six rooms of galleries and offices on the twelfth floor of Manhattan's Heckscher Building,[7] on the corner of Fifth Avenue and 57th Street, the museum moved into three more temporary locations within the next ten years. Abby's husband was adamantly opposed to the museum (as well as to modern art itself) and refused to release funds for the venture, which had to be obtained from other sources and resulted in the frequent shifts of location. Nevertheless, he eventually donated the land for the current site of the museum, plus other gifts over time, and thus became in effect one of its greatest benefactors.[8] 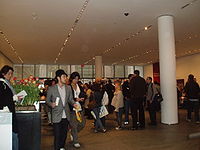 The entrance to The Museum of Modern Art

Yoko Ono, Wish Tree. Contributions from the members of IMMAGINE&POESIA to Yoko Ono's Wish Tree in the Sculpture Garden

During that time it initiated many more exhibitions of noted artists, such as the lone Vincent van Gogh exhibition on November 4, 1935. Containing an unprecedented sixty-six oils and fifty drawings from the Netherlands, and poignant excerpts from the artist's letters, it was a major public success and became "a precursor to the hold van Gogh has to this day on the contemporary imagination".[9]

The museum also gained international prominence with the hugely successful and now famous Picasso retrospective of 1939–40, held in conjunction with the Art Institute of Chicago. In its range of presented works, it represented a significant reinterpretation of Picasso for future art scholars and historians. This was wholly masterminded by Barr, a Picasso enthusiast, and the exhibition lionized Picasso as the greatest artist of the time, setting the model for all the museum's retrospectives that were to follow.[10]

When Abby Rockefeller's son Nelson was selected by the board of trustees to become its flamboyant president in 1939, at the age of thirty, he became the prime instigator and funder of its publicity, acquisitions and subsequent expansion into new headquarters on 53rd Street. His brother, David Rockefeller, also joined the museum's board of trustees, in 1948, and took over the presidency when Nelson took up position as Governor of New York in 1958.

David subsequently employed the noted architect Philip Johnson to redesign the museum garden and name it in honor of his mother, the Abby Aldrich Rockefeller Sculpture Garden. He and the Rockefeller family in general have retained a close association with the museum throughout its history, with the Rockefeller Brothers Fund funding the institution since 1947. Both David Rockefeller, Jr. and Sharon Percy Rockefeller (wife of Senator Jay Rockefeller) currently sit on the board of trustees. In 1937, MoMA had shifted to offices and basement galleries in the Time & Life Building in Rockefeller Center. Its permanent and current home, now renovated, designed in the International Style by the modernist architects Philip Goodwin and Edward Durell Stone, opened to the public on May 10, 1939, attended by an illustrious company of 6,000 people, and with an opening address via radio from the White House by President Franklin D. Roosevelt.[11]. In 1997 the Japanese architect Yoshio Taniguchi beat out ten other international architects to win the competition to execute the redesign of the museum, which after being closed in Manhattan for a time during the process (a temporary space was opened in Long Island City, Queens) reopened in 2004. Wish Tree, Yoko Ono's installation in the Sculpture Garden (since July 2010), has become very popular with contributions from all over the world. 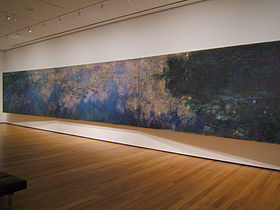 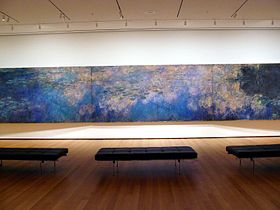 Considered by many to have the best collection of modern Western masterpieces in the world, MoMA's holdings include more than 150,000 individual pieces in addition to approximately 22,000 films and 4 million film stills. The collection houses such important and familiar works as the following:

MoMA developed a world-renowned art photography collection, first under Edward Steichen and then John Szarkowski, which included photos by Todd Webb,[12] as well as an important film collection under Museum of Modern Art Department of Film. The film collection owns prints of many familiar feature-length movies, including Citizen Kane and Vertigo, but the department's holdings also contains many less-traditional pieces, including Andy Warhol's eight-hour Empire and Chris Cunningham's music video for Björk's All Is Full of Love. MoMA also has an important design collection, which includes works from such legendary designers as Paul László, the Eameses, Isamu Noguchi, and George Nelson. The design collection also contains many industrial and manufactured pieces, ranging from a self-aligning ball bearing to an entire Bell 47D1 helicopter.

At various points in its history, MoMA has sponsored and hosted temporary exhibition houses, which have reflected seminal ideas in architectural history.

MoMA's midtown location underwent extensive renovations in the early 2000s, closing on May 21, 2002 and reopening to the public in a building redesigned by the Japanese architect Yoshio Taniguchi along with Kohn Pedersen Fox, on November 20, 2004. From June 29, 2002 until September 27, 2004, a portion of its collection was on display in what was dubbed MoMA QNS, a former Swingline staple factory in Long Island City, Queens.

The renovation project nearly doubled the space for MoMA's exhibitions and programs and features 630,000 square feet (59,000 m2) of new and redesigned space. The Peggy and David Rockefeller Building on the western portion of the site houses the main exhibition galleries, and The Lewis B. and Dorothy Cullman Education and Research Building on the eastern portion provides over five times more space for classrooms, auditoriums, teacher training workshops, and the museum's expanded Library and Archives. These two buildings frame the enlarged Abby Aldrich Rockefeller Sculpture Garden.

MoMA's reopening brought controversy as its admission cost increased from US$12 to US$20, making it one of the most expensive museums in the city; however it has free entry on Fridays after 4pm, thanks to sponsorship from Target Stores. Also, all CUNY college students receive free admission to the museum by simply going to the information desk. The architecture of the renovation is controversial. At its opening, some critics thought that Taniguchi's design was a fine example of contemporary architecture, while many others were extremely displeased with certain aspects of the design, such as the flow of the space.[16][17][18]

MoMA has seen its average number of visitors rise to 2.5 million from about 1.5 million a year before its new granite and glass renovation. The museum's director, Glenn D. Lowry, expects average visitor numbers eventually to settle in at around 2.1 million.[19]

Before the economic crisis of late 2008, the MoMA’s board of trustees decided to sell its equities in order to move into an all-cash position.[20] Museum Director Glenn D. Lowry lives in a rent-free $6 million apartment above the museum.[21]

Officers and the Board of Trustees

In 1969 the Art Workers Coalition (AWC), a group of New York City artists who opposed the Vietnam War, in collaboration with Museum of Modern Art members Arthur Drexler and Elizabeth Shaw,[22] created an iconic protest poster called And babies which depicts US soldiers as "baby killers." The poster uses an image by photojournalist Ronald L. Haeberle and references the My Lai Massacre. The Museum of Modern Art (MoMA) had promised to fund and circulate the poster, but after seeing the 2 by 3 foot poster MoMA pulled financing for the project at the last minute.[23][24] MoMA's Board of Trustees included Nelson Rockefeller and William S. Paley (head of CBS), who reportedly "hit the ceiling" on seeing the proofs of the poster.[23] Both were "firm supporters" of the war effort and backed the Nixon administration.[23] It is unclear if they pulled out for political reasons (as pro-war supporters), or simply to avoid a scandal (personally and/or for MoMA), but the official reason, stated in a press release, was that the poster was outside the "function" of the museum.[23] Nevertheless, under the sole sponsorship of the AWC, 50,000 posters were printed by New York City's lithographers union. On December 26, 1969, a grassroots network of volunteer artists, students and peace activists began circulating it worldwide.[23][24] Many newspapers and television shows re-printed images of the poster, consumer poster versions soon followed, and it was carried in protest marches around the world, all further increasing its viewership. In a further protest of MoMA's decision to pull out of the project, copies of the poster were carried by members of the AWC into the MoMA and unfurled in front of Picasso's painting Guernica (on loan to MoMA at the time) the painting depicts the tragedies of war and the suffering it inflicts upon innocent civilians.[23] The poster was included shortly thereafter in MoMA's Information exhibition of July 2 to September 20, 1970, curated by Kynaston McShine.[25]