Robert Rauschenberg (October 22, 1925 – May 12, 2008) was an American artist who came to prominence in the 1950s transition from Abstract Expressionism to Pop Art. Rauschenberg is well-known for his "Combines" of the 1950s, in which non-traditional materials and objects were employed in innovative combinations. Rauschenberg was both a painter and a sculptor and the Combines are a combination of both, but he also worked with photography, printmaking, papermaking, and performance.[1][2] He was awarded the National Medal of Arts in 1993.[3]

Rauschenberg lived and worked in New York City as well as on Captiva Island, Florida until his death from heart failure on May 12, 2008.[4]

Rauschenberg was born as Milton Ernest Rauschenberg in Port Arthur, Texas, the son of Dora and Ernest Rauschenberg.[5] His father was of German and Cherokee ancestry and his mother of Anglo-Saxon descent.[6][7] His parents were Fundamentalist Christians.[6] Rauschenberg studied at the Kansas City Art Institute and the Académie Julian in Paris, France, where he met the painter Susan Weil. In 1948 Rauschenberg and Weil decided to attend Black Mountain College in North Carolina.[8][9] 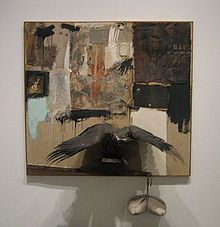 Josef Albers originally of the Bauhaus school became Rauschenberg's painting instructor at Black Mountain. Albers' preliminary courses relied on strict discipline that did not allow for any "uninfluenced experimentation".[10] Rauschenberg described Albers as influencing him to do "exactly the reverse" of what he was being taught.[4]

From 1949 to 1952 Rauschenberg studied with Vaclav Vytlacil and Morris Kantor at the Art Students League of New York,[11] where he met fellow artists Knox Martin and Cy Twombly.[12]

Rauschenberg married Susan Weil in 1950. Their only child, Christopher, was born July 16, 1951. They divorced in 1953.[13] According to a 1987 oral history by the composer Morton Feldman, after the end of his marriage, Rauschenberg had romantic relationships with fellow artists Cy Twombly and Jasper Johns.[14] An article by Jonathan D. Katz states that Rauschenberg's affair with Twombly began during his marriage to Susan Weil.[15]

Rauschenberg's will, filed in Probate Court on October 9, 2008, names his charitable foundation as a major beneficiary, along with Pottorf, Christopher Rauschenberg, Begneaud, his nephew Byron Richard Begneaud, and Susan Weil Kirschenbaum. The amounts to be given to the beneficiaries are not named, but the estate is "worth millions," said Pottorf, who is also executor of the estate.[19]

A memorial exhibition of photographs opened October 22, 2008, (on the occasion of what would have been his 83rd birthday) and closed November 5, 2008 at the Guggenheim Museum.[20]

Rauschenberg's approach was sometimes called "Neo Dadaist," a label he shared with the painter Jasper Johns.[21] Rauschenberg's was quoted as saying that he wanted to work "in the gap between art and life" suggesting he questioned the distinction between art objects and everyday objects, reminiscent of the issues raised by the "Fountain," by Dada pioneer, Marcel Duchamp. At the same time, Johns' paintings of numerals, flags, and the like, were reprising Duchamp's message of the role of the observer in creating art's meaning.

Alternatively, in 1961, Rauschenberg took a step in what could be considered the opposite direction by championing the role of creator in creating art's meaning. Rauschenberg was invited to participate in an exhibition at the Galerie Iris Clert, where artists were to create and display a portrait of the owner, Iris Clert. Rauschenberg's submission consisted of a telegram sent to the gallery declaring "This is a portrait of Iris Clert if I say so." 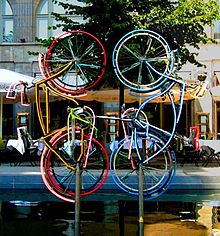 By 1962, Rauschenberg's paintings were beginning to incorporate not only found objects but found images as well - photographs transferred to the canvas by means of the silkscreen process. Previously used only in commercial applications, silkscreen allowed Rauschenberg to address the multiple reproducibility of images, and the consequent flattening of experience that implies. In this respect, his work is contemporaneous with that of Andy Warhol, and both Rauschenberg and Johns are frequently cited as important forerunners of American Pop Art.

In 1966, Billy Klüver and Rauschenberg officially launched Experiments in Art and Technology (E.A.T.) a non-profit organization established to promote collaborations between artists and engineers.

In 1984, Rauschenberg announced his Rauschenberg Overseas Culture Interchange, or ROCI, at the United Nations. This would culminate in a seven year, ten country tour to encourage "world peace and understanding," through Mexico, Chile, Venezuela, Beijing, Lhasa (Tibet), Japan, Cuba, Soviet Union, Berlin, and Malaysia in which he left a piece of art, and was influenced by the cultures he visited. Paintings, often on reflective surfaces, as well as drawings, photographs, assemblages and other multimedia were produced, inspired by these surroundings, and this was considered some of his strongest works. The ROCI venture, supported by the National Gallery of Art in Washington, D.C., went on view in 1991.

In 1986, he was commissioned by BMW to paint a full size BMW 635 CSi for the sixth installment of the famed BMW Art Car Project. Rauschenberg's contribution was the first to include the wheels in the project, as well as incorporating previous works of art into the design.

In addition to painting and sculpture, Rauschenberg's career has also included significant contributions to printmaking and Performance Art. He also won a Grammy Award for his album design of Talking Heads' album Speaking in Tongues. As of 2003 he worked from his home and studio in Captiva, Florida.

In a famously cited incident of 1953, Rauschenberg erased a drawing by de Kooning, which he obtained from his colleague for the express purpose of erasing it as an artistic statement. The result is titled Erased de Kooning Drawing.[22][23] In 1964 Rauschenberg was the first American artist to win the Grand Prize at the Venice Biennale (Mark Tobey and James Whistler had previously won the Painting Prize). After that time, he enjoyed a rare degree of institutional support. In 1951 Rauschenberg had his first one-man show at the Betty Parsons Gallery[24] and in 1954 had a second one-man show at the Charles Egan Gallery.[25] In 1955, at the Charles Egan Gallery, Rauschenberg showed Bed (1955), one of his first and certainly most famous Combines. [26] 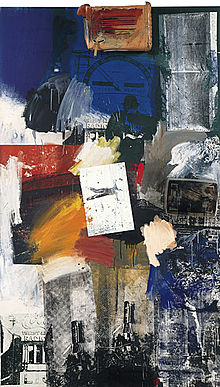 In 1951 Rauschenberg created his "White Paintings," in the tradition of monochromatic painting, whose purpose was to reduce painting to its most essential nature, and to subsequently lead to the possibility of pure experience.[27] The "White Paintings" were shown at Eleanor Ward's Stable Gallery in New York during October 1953. They appear at first to be essentially blank, white canvas. However, one commentator said that "…rather than thinking of them as destructive reductions, it might be more productive to see them, as John Cage did, as hypersensitive screens – what Cage suggestively described as ‘airports of the lights, shadows and particles.’ In front of them, the smallest adjustments in lighting and atmosphere might be registered on their surface.[28] Rauschenberg himself said that they were affected by ambient conditions, "so you could almost tell how many people are in the room." The Black Paintings of 1951 like the White Paintings were executed on multiple panels and were single colour works. Here Rauschenberg incorporated pieces of newspaper into the painting working the paper into the paint so that sometimes newspaper could be seen and in other places could not. By 1953-1954 Rauschenberg had moved from the monochromatic paintings of the White Painting and Black Painting series, to the Red Painting series. These paintings were created with diverse kinds of paint applications of red paint, and with the addition of materials such as wood, nails, newsprint and other materials to the canvas created complex painting surfaces, and were forerunners of Rauschenberg's well-known Combine series.[27]

Rauschenberg picked up trash and found objects that interested him on the streets of New York City and brought these back to his studio where they could become integrated into his work. He claimed he "wanted something other than what I could make myself and I wanted to use the surprise and the collectiveness and the generosity of finding surprises. And if it wasn't a surprise at first, by the time I got through with it, it was. So the object itself was changed by its context and therefore it became a new thing."[29]

Rauschenberg's comment concerning the gap between art and life can be seen as a statement which provides the departure point for an understanding of his contributions as an artist. In particular his series of works which he called Combines served as instances in which the delineated boundaries between art and sculpture were broken down so that both were present in a single work of art. Technically "Combines" refers to Rauschenberg's work from 1954 to 1962, but the artist had begun collaging newsprint and photographic materials in his work and the impetus to combine both painting materials and everyday objects such as clothing, urban debris, and taxidermied animals such as in Monogram[30] continued throughout his artistic life.

Considered the first of the Combines, Bed was created by dripping red paint across a quilt.The quilt was later stretched and displayed as a work of art. Some critics according the UK Telegraph considered the work to be a symbol for violence and rape.[31]

Critics originally viewed the Combines in terms of the formal aspects of art, shape, color, texture, and the composition and arrangement of these. This 1960's view has changed over time so that more recently critics and art historians see the Combines as carrying codified messages difficult to decipher because there is no apparent order to the presentation of the objects.