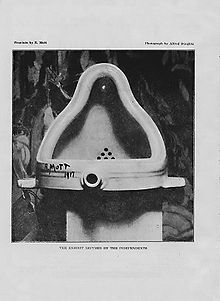 The original Fountain by Marcel Duchamp, 1917, photographed by Alfred Stieglitz at the 291 after the 1917 Society of Independent Artists exhibit. Stieglitz used a backdrop of The Warriors by Marsden Hartley to photograph the urinal. The exhibition entry tag can be clearly seen.[1]

Fountain is a 1917 work by Marcel Duchamp. It is one of the pieces which he called readymades. In such pieces he made use of an already existing object. In this case Duchamp used a urinal, which he titled Fountain and signed "R. Mutt". Readymades also go by the term Found object (French: objet trouvé).[2] The art show to which Duchamp submitted the piece stated that all works would be accepted, but Fountain was not actually displayed, and the original has been lost. The work is regarded by some as a major landmark in 20th century art.[3] Replicas commissioned by Duchamp in the 1960s are now on display in a number of different museums.

Marcel Duchamp arrived in the United States less than two years prior to the creation of Fountain and had become involved with Dada, an anti-rational, anti-art cultural movement, in New York City. Creation of Fountain began when, accompanied by artist Joseph Stella and art collector Walter Arensberg, he purchased a standard Bedfordshire model urinal from the J. L. Mott Iron Works, 118 Fifth Avenue. The artist brought the urinal to his studio at 33 West 67th Street, reoriented it to a position 90 degrees from its normal position of use, and wrote on it, "R. Mutt 1917".[4][5]

At the time Duchamp was a board member of the Society of Independent Artists and submitted the piece under the name R. Mutt, presumably to hide his involvement with the piece, to their 1917 exhibition, which, it had been proclaimed, would exhibit all work submitted. After much debate by the board members (most of whom did not know Duchamp had submitted it) about whether the piece was or was not art, Fountain was hidden from view during the show.[6] Duchamp and Arensberg resigned from the board after the exhibition.

The New York Dadaists stirred controversy about Fountain and its being hidden from view in the second issue of The Blind Man which included a photo of the piece and a letter by Alfred Stieglitz, and writings by Beatrice Wood and Arensberg. The anonymous editorial (which is assumed to be written by Wood) accompanying the photograph, entitled "The Richard Mutt Case,"[7] made a claim that would prove to be important concerning certain works of art that would come after it:

Whether Mr Mutt made the fountain with his own hands or not has no importance. He CHOSE it. He took an article of life, placed it so that its useful significance disappeared under the new title and point of view – created a new thought for that object.[8]

In defense of the work being art, Wood also wrote, "The only works of art America has given are her plumbing and her bridges."[8] Duchamp described his intent with the piece was to shift the focus of art from physical craft to intellectual interpretation.

Shortly after its initial exhibition, Fountain was lost. According to Duchamp biographer Calvin Tomkins, the best guess is that it was thrown out as rubbish by Stieglitz, a common fate of Duchamp's early readymades.[9]

The first reproduction of Fountain was authorized by Duchamp in 1950 for an exhibition in New York; two more individual pieces followed in 1953 and 1963, and then an artist's multiple was manufactured in an edition of eight in 1964.[10] These editions ended up in a number of important public collections; Indiana University Art Museum, San Francisco Museum of Modern Art, Philadelphia Museum of Art, the National Gallery of Canada, Centre Georges Pompidou and Tate Modern. The edition of eight was manufactured from glazed earthenware painted to resemble the original porcelain, with a signature reproduced in black paint.[11]

Of all the works in this series of readymades, Fountain is perhaps the best known because the symbolic meaning of the toilet takes the conceptual challenge posed by the readymades to their most visceral extreme.[12]

The title of the work

The use of the word "Dada" for the art movement, the meaning (if any) and intention of both the piece and the signature "R. Mutt", are difficult to pin down precisely. It is not clear whether Duchamp had in mind the German "Armut" (meaning "poverty"). If we separate the capital and lowercase letters we get "R.M" and "utt", "R.M" would stand for "Readymade" which is the fountain itself and "utt" when read out loud sounds like "eut été" in French (much like Duchamp's L.H.O.O.Q.).

The name R. Mutt is a play on its commercial origins and also on the famous comic strip of the time, Mutt and Jeff (making the urinal perhaps the first work of art based on a comic). In German, Armut means poverty, although Duchamp said the R stood for Richard, French slang for "moneybags", which makes Fountain, or "moneybags piss pot," a kind of scatological golden calf.[5]

In December 2004, Duchamp's Fountain was voted the most influential artwork of the 20th century by 500 selected British art world professionals.[13] The Independent noted in a February 2008 article that with this single work, Duchamp invented conceptual art and "severed forever the traditional link between the artist's labour and the merit of the work".[14]

Jerry Saltz wrote in The Village Voice in 2006:

Duchamp adamantly asserted that he wanted to "de-deify" the artist. The readymades provide a way around inflexible either-or aesthetic propositions. They represent a Copernican shift in art. Fountain is what's called an "acheropoietoi," [sic] an image not shaped by the hands of an artist. Fountain brings us into contact with an original that is still an original but that also exists in an altered philosophical and metaphysical state. It is a manifestation of the Kantian sublime: A work of art that transcends a form but that is also intelligible, an object that strikes down an idea while allowing it to spring up stronger.[5]

The prices for replicas, editions, or works that have some ephemeral trace of Duchamp reached its peak with the purchase of one of the eight 1964 replicas of "Fountain" for $1.7 million at Sotheby's in November 1999.[15] 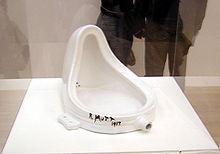 Swedish artist Björn Kjelltoft urinated in the Fountain at Moderna Museet in Stockholm in 1999.[16]

In spring 2000, Yuan Chai and Jian Jun Xi, two performance artists, who in 1999 had jumped on Tracey Emin's installation-sculpture My Bed in the Turner Prize exhibition at Tate Britain, went to the newly opened Tate Modern and urinated on the Fountain which was on display. However, they were prevented from soiling the sculpture directly by its Perspex case. The Tate, which denied that the duo had succeeded in urinating into the sculpture itself,[17] banned them from the premises stating that they were threatening "works of art and our staff." When asked why they felt they had to add to Duchamp's work, Chai said, "The urinal is there – it's an invitation. As Duchamp said himself, it's the artist's choice. He chooses what is art. We just added to it."[14]

On January 4, 2006, while on display in the Dada show in the Pompidou Centre in Paris, Fountain was attacked by Pierre Pinoncelli, a 76 year old [18] French performance artist, with a hammer causing a slight chip. Pinoncelli, who was arrested, said the attack was a work of performance art that Marcel Duchamp himself would have appreciated.[19] In 1993 Pinoncelli urinated into the piece while it was on display in Nimes, in southern France. Both of Pinoncelli's performances derive from neo-Dadaists' and Viennese Actionists' intervention or manoeuvre.[citation needed]

Duchamp is often misquoted as saying:

This Neo-Dada, which they call New Realism, Pop Art, Assemblage, etc., is an easy way out, and lives on what Dada did. When I discovered the ready-mades I sought to discourage aesthetics. In Neo-Dada they have taken my readymades and found aesthetic beauty in them, I threw the bottle-rack and the urinal into their faces as a challenge and now they admire them for their aesthetic beauty.

However, fellow Dadaist Hans Richter explained years later that it was in a letter he had written to Duchamp in 1961, except in the second person not the first, i.e. "You threw..." etc. Duchamp had written in French, "Ok, ça va très bien" ("Ok, that's going very well") in the margin beside it.[20]