Ace of the Gashouse Gang

Dean was best known for leading the 1934 "Gashouse Gang" St. Louis team. He had a 30–7 record with a 2.66 ERA during the regular season. His brother, Paul, was also on the roster, and was nicknamed "Daffy", although this was usually only done for press consumption. Though "Diz" sometimes called his brother "Daf", he typically referred to himself and his brother as "Me an' Paul".

The Gashouse Gang was the southernmost and westernmost team in the major leagues at the time, and became a de-facto "America's Team." Team members, particularly Southerners such as the Dean brothers and Pepper Martin, became folk heroes in Depression-ravaged America. Americans saw in these players, dirty and hustling rather than handsome and graceful, a spirit of hard work and perseverance, as opposed to the haughty, highly-paid New York Giants, whom the Cardinals chased for the National League pennant.

Much like later sports legends Joe Namath and Muhammad Ali, Dizzy liked to brag about his prowess and make public predictions. In 1934, Dizzy predicted, "Me an' Paul are gonna win 45 games." On September 21, Diz pitched no-hit ball for eight innings against the Brooklyn Dodgers, finishing with a three-hit shutout in the first game of a doubleheader, his 27th win of the season. Paul then threw a no-hitter in the nightcap, to win his 18th, matching the 45 that Diz had predicted. "Gee, Paul", Diz was heard to say in the locker room afterward, "if I'd a-known you was gonna throw a no-hitter, I'd a-thrown one too!" He also bet he could strike out Vince DiMaggio four times in one game. He struck him out his first three at bats, but when DiMaggio hit a popup behind the plate at his fourth, Dean screamed at his catcher, "Drop it!, Drop it!" The catcher did and Dean fanned DiMaggio, winning the bet. Few in the press now doubted Diz's boast, as he was also fond of saying, "It ain't braggin' if ya can back it up." Diz finished with 30 wins, the only NL pitcher to do so in the post-1920 live-ball era, and Paul finished with 19, for a total of 49. The Cards needed them all to edge the Giants for the pennant, setting up a matchup with the American League champion Detroit Tigers. After the season, Dizzy Dean was awarded the National League's Most Valuable Player Award.

Dean was known for antics which inspired his nickname. In time, perception became reality. In Game 4 of the 1934 World Series against the Detroit Tigers, Dean was sent to first base as a pinch runner. The next batter hit a potential double play groundball. Intent on avoiding the double play, Dean threw himself in front of the throw to first. The ball struck him on the head, and Dean was knocked unconscious and taken to a hospital. The storied (and possibly apocryphal) sports-section headline the next day said, "X-ray of Dean's head reveals nothing." Although the Tigers went on the win the game 10-4, Dean recovered in time to pitch in Games 5 and 7 and put the Series away for the Cardinals.

Branch Rickey, the Cardinals executive who had developed their farm system and built the great 1930s Cardinals teams, found Dean's homespun candidness and observations refreshing. He once told a friend, with some bemusement, "Tell me why I spent four mortal hours today conversing with a person named Dizzy Dean." 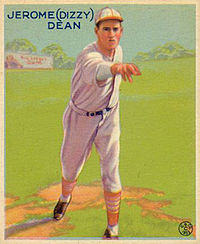 While pitching for the NL in the 1937 All-Star Game, Dean faced Earl Averill of the American League Cleveland Indians. Averill hit a line drive back at the mound, hitting Dean on the foot. Told that his big toe was fractured, Dean responded, "Fractured, hell, the damn thing's broken!" Coming back too soon from the injury, Dean changed his pitching motion to avoid landing as hard on his sore toe enough to affect his mechanics. As a result he hurt his arm, losing his great fastball.

By 1938, Dean's arm was largely gone. Chicago Cubs scout Clarence "Pants" Rowland was tasked with the unenviable job of obeying owner P. K. Wrigley's direct order to buy a washed-up Dizzy Dean's contract at any cost. Rowland signed the ragged righty for $185,000, one of the most expensive loss-leader contracts in baseball history. Dean helped the Cubs win the 1938 National League pennant, and pitched gamely in Game 2 of the World Series before losing to the New York Yankees in what became known as "Ol' Diz's Last Stand." He limped along for the Cubs until 1941, when he retired. Between the ages of 23 and 27, he was arguably the best pitcher in baseball; by 28, he was just another pitcher, and at 31 he was done.

Dizzy Dean made a one-game comeback on September 28, 1947. After retiring as a player, the still-popular Dean was hired as a broadcaster by the perennially cash-poor Browns to drum up some badly needed publicity. After broadcasting several poor pitching performances in a row, he grew frustrated, saying on the air, "Doggone it, I can pitch better than nine out of the ten guys on this staff!" The wives of the Browns pitchers complained, and management, needing to sell tickets somehow, took him up on his offer and had him pitch the last game of the season. At age 37, Dean pitched four innings, allowing no runs, and rapped a single in his only at-bat. Rounding first base, he pulled his hamstring. Returning to the broadcast booth at the end of the game, he said, "I said I can pitch better than nine of the ten guys on the staff, and I can. But I'm done. Talking's my game now, and I'm just glad that muscle I pulled wasn't in my throat."

In 1957, he appeared as a guest in the ABC variety program, The Guy Mitchell Show.

Following his playing career Dean became a well-known radio and television sportscaster, calling baseball for the Cardinals (1941–46), Browns (1941–48), Yankees (1950–51), and Atlanta Braves (1966–68) and nationally with Mutual (1952), ABC (1953–54), and CBS (1955–1965). As a broadcaster, Dean was famous for his wit and his often-colorful butchering of the English language. Much like football star-turned-sportscaster Terry Bradshaw years later, he chose to build on, rather than counter, his image as a not-too-bright country boy, as a way of entertaining fans: "The Good Lord was good to me. He gave me a strong right arm, a good body, and a weak mind." He once saw Browns outfielder Al Zarilla slide into a base, and said, "Zarilla slud into third!" "Slud" instead of "slid" became a frequently-used Dean expression. Thanks to baseball fan Charles Schulz, another Dean expression found its way into a Peanuts strip, as Lucy commented on a batter who swung at a pitch outside the strike zone: "He shouldn't hadn't ought-a swang!" Once, describing a player who had struck out, Dean said, "he nonchalantly walks back to the dugout in disgust."

While doing a game on CBS Dean once said, over the open mike, "I don't know why they're calling this the Game of the Week. There's a much better game, Dodgers and Giants, over on NBC." Every so often, he would sign off by saying, "Don't fail to miss tomorrow's game!" These manglings of the language only endeared Dean to fans, being a precursor of such beloved ballplayers-turned-broadcasters as Ralph Kiner, Herb Score and Jerry Coleman.

An English teacher once wrote to him, complaining that he shouldn't use the word "ain't" on the air, as it was a bad example to children. On the air, Dean said, "A lot of folks who ain't sayin' 'ain't,' ain't eatin'. So, Teach, you learn 'em English, and I'll learn 'em baseball."

The Pride of St. Louis, a motion picture loosely based on Dean's career, was released in 1952. Dan Dailey portrayed Dean. Chet Huntley, who would later gain fame as an NBC News anchorman, played an uncredited role in the movie as Dean's radio announcing sidekick.

The National Sportscasters and Sportswriters Association inducted Dean into its Hall of Fame in 1976. Dean has several times been nominated for the Ford C. Frick Award, given each year by the Baseball Hall of Fame for excellence in baseball broadcasting.

After leaving sportscasting in the late 1960s, Dean settled with his wife, Patricia, in her hometown—Bond, Mississippi.[1] Dean died at age 64 in Reno, Nevada, of a heart attack, and was buried in the Bond Cemetery.[2] Dean's home in Bond was named Deanash, a combination of his name and his wife's maiden name (Nash); it was willed by Dean's wife to the Mississippi Baptist Convention, which operates foster homes for children in a rural setting.[3]

A Dizzy Dean Museum was established at 1152 Lakeland Drive in Jackson, Mississippi. The building was significantly expanded, and the Dean exhibit is now part of the Mississippi Sports Hall of Fame & Museum, located adjacent to Smith-Wills Stadium, a former minor-league baseball park.[4] On July 6, 2000, The United States Congress designated the U.S. Post Office in Wiggins, Mississippi, as the "Jay Hanna 'Dizzy' Dean Post Office" by Public Law 106-236.[5] On October 22, 2007, a rest area on U.S. Route 49 in Wiggins, Mississippi, five miles south of Dean's home in Bond, Mississippi, was named "Dizzy Dean Rest Area" after Dean.[6] In Morrison Bluff, AR; about 2 miles south of Clarksville, AR; there is a restaurant, Porky's, with Dizzy Dean memorabilia.

Dean was mentioned in the poem "Line-Up for Yesterday" by Ogden Nash:

D is for Dean,
The grammatical Diz,
When they asked, Who's the tops?
Said correctly, I is.

Dean was referenced in the classic Honeymooners TV series by neighbor Ed Norton, who justified mooching a second dinner off of Ralph Kramden by saying, "Just like Dizzy Dean warms up in the bull pen before a game, I warm up by having my first dinner." Later in the scene, when tensions rise, Kramden quips "Shut up, Dizzy Dean, and eat your spaghetti!"

Dean is also featured prominently in some versions of Abbott & Costello's Who's on First comedy sketch. In the sketch Abbott is explaining to Costello that many ballplayers have unusual nicknames including Dizzy Dean, his brother Daffy Dean and their "French cousin Goo-fay Dean" The fictitious French cousin's name is 'goofy' pronounced with an exaggerated french accent.