Christopher John Carpenter (born April 27, 1975 in Exeter, New Hampshire) is a starting pitcher in Major League Baseball who has played for the St. Louis Cardinals since 2003, and is currently signed with the team until the 2011 season, with a club option for 2012.[1]

Carpenter was 22 years old and a highly-regarded prospect when he broke into the majors in 1997 with the Toronto Blue Jays. He stayed with Toronto until after the 2002 season. He is 6' 6" tall and weighs 230 pounds.

Carpenter began his pro career with the Medicine Hat Jays of the short-season Pioneer League in 1994. In his debut against the Great Falls Dodgers, he tossed six scoreless innings of one-hit ball, fanning nine along the way. He ended up with a mark of 6–3 and turned in the league’s third-lowest ERA. He was also picked as the Pioneer League’s #3 prospect by league managers, behind Aaron Boone and Ray Brown.

Carpenter made his major league debut as a starter against the Minnesota Twins on May 12, 1997, pitching three innings in a 12–2 loss. He would lose his first five decisions before defeating the Chicago White Sox 6–5 on August 19, 1997. Carpenter pitched his first career complete game and shutout on September 9, 1997 as Toronto defeated the Anaheim Angels 2–0. Carpenter finished his rookie season with a 3–7 record and a 5.09 ERA.

After making two starts to begin the 1998 season, pitching a combined 10 innings and having a 9.00 ERA, the Blue Jays moved Carpenter into the bullpen, where he stayed until the end of May. Toronto moved Carpenter back into the starting rotation, and he pitched very well for the rest of the season, including winning six of his last seven decisions as the Blue Jays made a late push for a playoff spot, however, Toronto missed the playoffs, finishing four games behind the Boston Red Sox for the AL Wildcard. Carpenter recorded 12 wins, tying Pat Hentgen for second highest on the club, as he had a 12–7 record with a 4.37 ERA.

Carpenter had an injury plagued 1999 season, as he made only 24 starts, finishing with a 9–8 record with a 4.38 ERA. He struggled during the 2000 season, and at the beginning of August, in which Carpenter had a 7–10 record with a 6.99 ERA, he was pulled out of the starting rotation and placed into the bullpen. Carpenter returned to the rotation after a few weeks, and pitched better in September to finish the season with a 10–12 record, and posting a 6.26 ERA.

He pitched much better during the first half of the 2001 season, as at the end of June, Carpenter had a 7–4 record with a 3.67 ERA. He would then lose his next seven decisions over his next ten starts to fall to 7–11 and a 4.59 ERA. Carpenter rebounded from his slump to finish with a record of 11–11 and an ERA of 4.09. His 11 victories tied him with Esteban Loaiza and Paul Quantrill for the team high. Carpenter, along with Roy Halladay, were considered the starters of the future for the Blue Jays.[2]

Carpenter was named the Blue Jays opening day starter in 2002 on April 1 at Fenway Park against the Boston Red Sox. Carpenter was rocked in his start, pitching 2 1⁄3 innings, allowing six runs, and received a no-decision in Toronto's 12–11 win. He was then placed on the disabled list due to a shoulder injury, and would not make another start until April 21. Carpenter lasted only three innings in his second start, allowing three runs against the New York Yankees, taking the loss as New York won the game 9–2. Carpenter once again was placed on the disabled list, where he remained until late June. He would once again go back on the disabled list in the middle of August, and remained there for the rest of the season as he had shoulder surgery in September. Carpenter finished the year 4–5 with a 5.28 ERA. At the end of the season, the Blue Jays removed Carpenter from the 40-man roster and offered him a minor league incentive deal, which Carpenter refused, allowing him to become a free agent.[3] 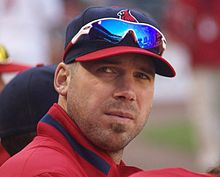 Carpenter with the Cardinals

The Cardinals signed Carpenter prior to the 2003 season, hoping he would be ready by mid-season.[4] He was forced to sit out the entire 2003 season due to a torn glenoid labrum. However, Carpenter came back with an impressive 2004, helping the Cardinals win the National League pennant for the first time since 1987. In September, Carpenter was benched with a nerve problem in his right biceps, ending his season and causing him to miss the 2004 World Series.

In 2005, Carpenter posted his best year to date. He set career bests in ERA (2.83), strikeouts (213), innings pitched (241 2⁄3), complete games (7) and shutouts (4) while amassing a 21–5 record for the Division Champion Cardinals. While not a leader in any one statistical category in 2005, he was selected over Dontrelle Willis as the National League Cy Young Award winner. He also was selected as the starter for the National League in the 2005 All Star Game.

This time, Carpenter was healthy for the post-season. Although the Cardinals lost to the Houston Astros in the National League Championship Series, he pitched well throughout the postseason, going 2–0 with a 2.14 ERA in 21 innings against the San Diego Padres and Houston.

Carpenter continued pitching well throughout the 2006 season, achieving personal feats such as striking out a career-high 13 batters on June 13, 2006 against the Pittsburgh Pirates[5] and winning his 100th career game on September 16, 2006 beating the San Francisco Giants 6–1.[6] Carpenter became the third member of the St. Louis Cardinals pitching staff to get his 100th career win in 2006, after Jeff Suppan and Mark Mulder. Carpenter was also voted on the 2006 All-Star game, and finished third in the Cy Young Award voting behind Brandon Webb and Trevor Hoffman.[7]

Carpenter won his first career World Series start in Game 3 against the Detroit Tigers on October 24, 2006 at Busch Stadium in St. Louis, Missouri by pitching eight innings and allowing no runs on three hits. In his first eight career post-season starts, he had a 5–1 record with a 2.53 ERA in 53 1⁄3 innings.

In 2007, Carpenter pitched only one game. After an opening day (April 1) loss to the New York Mets, Carpenter was sidelined with elbow problems and the team announced on May 5, 2007, that he would need surgery to trim bone spurs. As Carpenter was attempting to return from elbow surgery, further problems developed and on July 19, 2007, the Cardinals announced that he needed Tommy John Surgery and would be sidelined for at least 12 months.

On July 30, 2008, Carpenter made his first Major League start since Opening Day 2007, 486 days, against the Atlanta Braves. He lasted four innings, gave up one run on five hits (all singles), walking two and striking out two, on 67 pitches (36 strikes).[9] Though Carpenter got the no decision, the Cardinals went on to win the game 7–2.

After making only one start in 2007, and only three starts in the 2008 season, Carpenter gave a stunning one-hit performance in his first start of the 2009 season against Pittsburgh, shutting them out in seven innings, walking two while striking out seven at Busch Stadium. He faced only 26 batters, five over the minimum, and threw 92 pitches—61 for strikes.[10] It was his 101st career win, against only 70 losses (.591 win pct.).

Pitching against Arizona on April 14, 2009, he strained his left rib-cage after batting in the top of the fourth inning, had to be taken out of the game after trying to pitch in the bottom half.[11]

He was placed on the 15-day disabled list April 15, and the initial estimate was for him to be out from four to eight weeks pending an MRI and evaluation the next day;[12] the MRI revealed an oblique tear on his left side.[13]

On June 4, he threw his 26th career complete game, and lowered his ERA for the season to 0.71, the lowest for any Cardinals' pitcher in the first six starts of a season, breaking Harry Brecheen's mark of 0.75 set in 1948.[18]

A 7–0 victory over San Diego at Petco Park on August 22, giving him an NL-tying 14th win, was the unofficial 10,000th win in Cardinals' franchise history. The official total (9,219 at the time) is lower because the Cardinals do not count its ten years in the American Association in its all-time statistics.[19]

On October 1, 2009, Carpenter hit his first career home run, a grand slam, in the Cards' 13–0 rout of the Cincinnati Reds at Cincinnati. He drove in two more runs in the game with a double, making him only the fourth pitcher since the advent of divisional play in 1969 to have at least 6 RBI in a game, and broke the Cardinals' club record held by Bob Gibson, who had five RBI on July 26, 1973.[22][23]

For the second time in his career, he won the NL Comeback Player of the Year, after leading the NL with a 2.24 ERA – his first league title in the category – and an .810 winning percentage (17–4). He was also the runner-up for the National League Cy Young award, sandwiched in the voting between teammate Adam Wainwright and winner Tim Lincecum.[24]

He won the 2009 Tony Conigliaro Award (January 11, 2010) unanimously, given annually to a Major League Baseball player who best overcomes an obstacle and adversity through the attributes of spirit, determination and courage that were trademarks of Tony Conigliaro.

Since first pitching for the Cardinals in 2004, he was 68–24 through his first six seasons with the club, his .739 winning percentage the highest in team history through 2009. 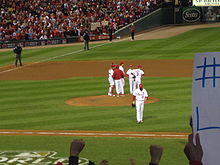 Carpenter relieved in the top of the 7th, Game 7 of the 2011 World Series.

In 2010, Carpenter was involved in a bench-clearing brawl with the Cincinnati Reds. After a heated exchange with Reds' manager Dusty Baker, following an incident between Cardinals' catcher Yadier Molina and the Reds' Brandon Phillips which cleared the benches, the two teams began shoving and grappling with each other. During the scuffle, Reds' starting pitcher Johnny Cueto repeatedly kicked Carpenter and his teammate Jason LaRue who both sustained injuries, leading to a 7 game suspension for Johnny Cueto.

Also in this benches clearing brawl, Carpenter could be seen exchanging words with several players, then the whole crowd of players including his own massed together in his direction. And he was pushed up against the railing bordering the stands and almost fell in the middle of the chaos. [25][26]

Through September 28, 2011, Carpenter holds the Cardinals' franchise record for the highest winning percentage by a starting pitcher (95–42;  0.693).

On Friday, October 7, 2011 Carpenter pitched a complete-game, 3-hit shutout to carry the Cardinals to victory in the National League Division Series against the Philadelphia Phillies. He beat former teammate and long-time friend Roy Halladay in a sensational 1–0 pitcher's duel.[27]

In Game 7 of the 2011 World Series, Carpenter pitched six innings on three days rest, leading the Cardinals to a 6-2 win over the Texas Rangers. Carpenter was 2-0 in his second World Series win.[29]

Carpenter is known to have five quality pitches and throws two and four-seam fastballs in the 92–96 mph range consistently. He is known to have one of the better curveballs in baseball and has excellent command over his cutter and circle-change up.[citation needed] He is known as being unpredictable to opposing batters in his pitching pattern, as he will throw any of his pitches at any time.

As of 2005, Carpenter resides in St. Louis with his wife Alyson, son Sam, and daughter Ava.[citation needed]