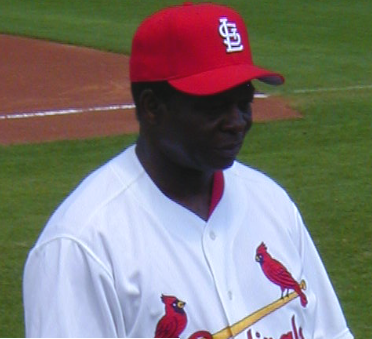 Louis Clark "Lou" Brock (born , , ) is an American former player in . Brock was a who played his career with the and . He batted and threw left-handed. He is currently a special instructor coach for the .

Brock was born in , and played college baseball at Southern University in Baton Rouge, Louisiana. He signed with the Cubs as an amateur free agent and broke into the Majors in by|1961.

Brock was blessed with great speed and baserunning instincts, but the young right fielder failed to impress the Cubs management. In by|1964 after losing patience with his development, the Cubs gave up on Brock and made him part of a trade with the . The deadline deal for pitcher saw Brock, and Paul Toth head to St. Louis for Broglio, , and . Cardinals general manager , specifically sought Brock at the insistence of Cardinals' manager to increase team speed and solidify the Cardinals' lineup, struggling after the retirement of left fielder in 1963. At the time, many thought the deal was a heist for the Cubs. Broglio had led the National League in wins four years earlier, and had won 18 games at the time of the trade.

After Brock was traded to the Cardinals, his career turned around significantly. He moved to left field and batted .348 and stole 38 bases for the Cardinals in the remainder of the 1964 season. At the time of the trade, the Cardinals were 28-31, in eighth place in the National League, trailing even the Cubs, who were 27-27 and in sixth place. Four months to the day later, the Cardinals would win the in seven games over the favored New York Yankees, who were appearing in their fourteenth World Series in sixteen years (and their last until a dozen years later), helped in part by Brock's rejuvenated bat. Meanwhile, Broglio won only seven games for the Chicago Cubs before retiring from baseball after the 1966 season. To this day, the trade of is considered one of the most lopsided deals in baseball history. It is considered by many Cubs fans to be the worst in franchise history (dating back to by|1871).

During his career, Brock helped the Cardinals to National League pennants in 1964, 1967, and 1968 and to championships in 1964 and 1967, defeating the and the , respectively, both times in seven games. The Cardinals suffered one loss during Brock's tenure. That was in 1968 against the - the Tigers rallied from down three games to one behind the excellent pitching of .

In by|1967, Brock became the first player to steal 50 bases and hit 20 home runs in the same season.

His supreme talent for basestealing perhaps overshadowed his fine hitting, as he collected 3,023 hits in his career. He was also not particularly known as a power hitter, but he did display significant "pop" from time to time. In David Halberstam's book, "October 1964", the author states that manager Johnny Keane asked Brock to forgo the power game in favor of the speed game. However, Brock got some licks in, here and there.

In his rookie season (by|1962), Brock became one of three players to hit a home run into the center-field bleachers at the old in New York since its 1923 reconstruction. His blast came against Al Jackson in the second game of a against the and would be followed by 's shot the very next day. was the first to hit a ball over that wall, in by|1953. had reached the old bleachers (a comparable distance) before the reconstruction.

In 1967, Brock hit 5 home runs in the first 4 games of the season, becoming the first player to do so.

Brock remained best known for base-stealing and starting Cardinals rallies. He was said to have disdained ' method of base-stealing, instead shortening his leads and going hard into second base, thus inflicting punishment on opposing players rather than himself by having to dive back into first base frequently. He was also an early student of game films. He used an 8mm movie camera from the dugout to film opposing pitchers and study their windups and moves to detect weaknesses he could exploit.

In a unique (if incidental) accomplishment, Brock was the first player ever to bat in a major league regular season game in . He led off the , by|1969 game against the at Jarry Park by lining out to second baseman . The Expos' pitcher, , was a teammate of Brock's just the year before, and had been selected in the by the Expos after the by|1968 season.

Awards, honors and life after baseball

His number 20 was retired by the St. Louis Cardinals.

Brock was inducted into the .

After retiring from baseball, Brock prospered as a businessman, especially as a florist in the area. Lou Brock is a member of Fraternity Inc. Brock still regularly appears at Cardinals games. When he steps onto the field he is always greeted by a loud, low-pitched cheer of "Loooouuuuuuuuuuuu". This may sound like "Boooo" to those unfamiliar with the team, and the town's love for Lou Brock.

Brock also lent his name to a unique rainhat, shaped like a miniature umbrella and to be worn at games during showers in lieu of retreating to the concourse. The product was called the "Brockabrella". There is no indication whether its name was in any way influenced by Brock's contemporary, utility man John Boccabella.

Brock and his wife are both ordained ministers serving at Abundant Life Fellowship Church in St. Louis. [http://loubrock.com/ministry.htm]

On December 5, 2006 he was recognized for his accomplishments on and off of the field when he received the "Lifetime Achievement Award".

Brock is the father of former USC Trojan and NFL player

Even though his stolen base record has been surpassed, the honors each stolen base leader with the Lou Brock award.

One of his most famus sayings was "Show me a guy who is afraid to look bad and i'll show you a guy you can beat every time."