The Colombia–Peru War of 1932-3 was the result of dissatisfaction with the Salomón-Lozano Treaty and the imposition of heavy tariffs on sugar. The war started with an internal insurrection in Peru, a civilian takeover of the city Iquitos. On September 1, 1932 President Luis Miguel Sánchez dispatched two regiments of the Peruvian Army to Leticia and Tarapacá, both Peruvian settlementes in the Amazonas Department in present day southern Colombia. These actions were mostly ignored by the Colombian Government at the time.

It was not until September 17 of that same year that the Colombian Government took notice. The Peruvian Military Forces which were encroached upon the banks of the Putumayo River stopped several large trade ships from traveling to Leticia. The result of this was an explosion of Colombian patriotism. Laureano Gómez head of the Senate minority proclaimed, "Peace, peace, peace in inner Colombia; War, war, war on the border against our despicable enemy."

On September 19, El Tiempo reported that they had received over 10,000 letters calling for war and control of Leticia. That same day thousands of Colombian students marched through the streets of Bogotá chanting, "Sánchez Cerro will die and Colombia will defy!" Vásquez Cobo was declared general of the Colombian Amazonian Navy and 10 million dollars were approved by the Senate to fund his venture. Over 400 kilos of gold were donated by the Colombian cities as a symbol of gratitude to Huilan engineer, César García Álvarez. 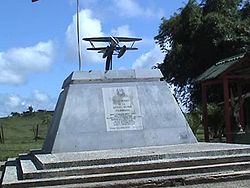 War Memorial in Tarapacá, Colombia. Plaque reads,"To the Heroes of the Colombian Air Force; who with true courage gave the best of themselves; flying with their noble aircraft over river and jungle. Declaring over our Amazonia with the sound of their motors the sovereignty of our country during the war with Peru."

President Sánchez believed Colombia had no chance of defending itself: lacking roads and a proper Navy, the Amazon region had no Colombian military presence. It was not until December 1932 that General Alfredo Vásquez Cobo reached the mouth of the Amazon River with a fleet of old ships he acquired in Europe. Within 90 days Colombia organized a respectable military response to the Peruvian invasion. Herbert Boy and the other German Aviators of SCADTA (later to become Avianca) fitted their commercial planes for war as a temporary Colombian Air Force. The first attack by the Colombian Navy was upon Tarapacá. The city had been chosen because Leticia was on the border with Brazil and the Colombian Forces did not want to create further international conflict by giving the Peruvians a chance to flee into Brazil.[citation needed] The recuperation of Tarapacá was a bloodless event. The day before, February 14, 1933, the Peruvian Air Force had attempted to bomb the Colombian Fleet, but most of the bombs had hit off target.[1] The remainder of the Peruvian forces in the zone fled as Vásquez Cobo's Amazonian Navy landed the following day.

The first air combat in South America took place during this war between the Peruvian Air Force and the Colombian Air Force.[2]

On the same day, the Colombian president Enrique Olaya broke off all relations with the Peruvian government due to aerial attack. Not wanting to involve Brazil in the war, the President did not order an attack on Leticia.

On April 30, 1933, after giving a speech at the Lima Senatal Dome, President Sánchez was shot dead on the steps of the dome by a young cook. 15 days later, his successor, Óscar Benavides, met with the head of the Colombian Liberal Party, Alfonso López Pumarejo, to secure an agreement to turn Leticia over to a League of Nations commission.

Colombia and Peru met in Rio de Janeiro, Brazil to sign a peace treaty. In the Rio de Janeiro Protocol, as it was called, Peru stated that, "We sincerely deplore the events that occurred starting September, 1932. Specifically those that damaged our relationship with Colombia." The Salomón-Lozano Treaty was also reaffirmed by the Peace Treaty.