Ecclesiastes Rabbah or Kohelet Rabbah (קהלת רבה) is an haggadic commentary on Ecclesiastes, included in the collection of the Midrash Rabbot. It follows the Biblical book verse by verse, only a few verses remaining without comment. In the list of the old sedarim for the Bible four sedarim are assigned to Ecclesiastes, namely, to i. 1, iii. 13, vii. 1, and ix. 7; and the Midrash Ḳohelet was probably divided according to these sections. This appears from the phrase "Sidra tinyana" inserted between the comments to Eccl. vi. 12 and to vii. 1, and the phrase "Sidra telita'a" between the comments to Eccl. ix. 6 and to ix. 7. These phrases occur at the end of the second and third midrash sections, in the same way that "Seliḳ sidra" indicates the end of sections in Ruth R. and Esth. R. in the earlier editions. The commentary to iii. 12 having been lost, the exposition of the conclusion of the first section is missing. Nothing remains to indicate where one section ends and another begins, as there is no introductory remark to the comment on ii. 13. But an introduction is also lacking to the comment on vii. 1 and ix. 7.

The author confined himself chiefly to collecting and editing, and did not compose new introductions to the sections. He, dated between the sixth and eight centuries however, used to a great extent the introductions which he found either in the earlier midrashim—Bereshit (Genesis) Rabbah, Pesiḳta, Ekah (Lamentations) Rabbati, Wayiḳra (Leviticus) Rabbah, Shir ha-Shirim (Canticles) Rabbah—or in the collections from which those midrashim were compiled. This shows the important part which the introductions to the earlier midrashim played in the later midrashim, in that they served either as sources or as component parts of the latter. For introductions to commentaries on the Bible text and for homilies on the sedarim and Pesiḳta cycle, it was customary to choose texts occurring not in the Pentateuch, but chiefly in the Hagiographa, including Ecclesiastes. This, even in very early times, gave rise to a haggadic treatment of numerous passages in Ecclesiastes, which in turn furnished rich material for the compilation of the Midrash Ḳohelet.

The longest passages in the Midrash Ḳohelet are the introductions to Pesiḳta and Wayiḳra Rabbah, all of which the author used. Some introductions were abbreviated, and introductions from different midrashim were combined in a comment on one passage of Ecclesiastes. For instance, the long passage on Eccl. xii. 1-7 is a combination of the introduction to Wayiḳra Rabbah xviii. 1 and the twenty-third introduction in Ekah Rabbati (ed. S. Buber, pp. 9a-12a). Of the 96 columns which the Midrash Ḳohelet contains in the Venice edition (fols. 66c-90b), nearly twenty are occupied by expositions which the author took from introductions in Bereshit Rabbah, Pesiḳta, Wayiḳra Rabbah, and Shir ha-Shirim Rabbah; namely, the comments to Eccl. i. 1, 3, 5, 18; ii. 2, 12b, 21, 23; iii. 1, 11, 15, 16; v. 4, 5, 8, 15; vi. 7; vii. 14, 23 et seq.; viii. 1; ix. 2, 15; x. 20; xi. 2, 6; xii. 1-7. Many other passages besides the introductions have been transferred from those sources to the Midrash Ḳohelet. Moreover, it contains several passages in common with Ruth R.; compare especially the comment on Eccl. vii.8, which includes the story of R. Meïr and his teacher Elisha b. Abuya, with Ruth Rabbah vi. (to Book of Ruth iii. 13), with which it agrees almost verbatim. In this case the story was not taken direct from its source in Yer. Ḥag. ii. 77b, c.

Passages from the Babylonian Talmud 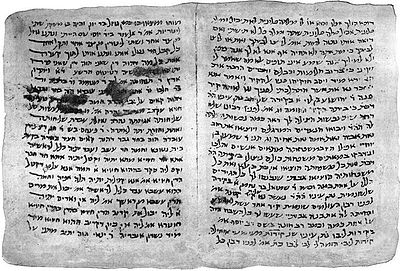 The author of the Midrash Ḳohelet of course frequently consulted the aggadah of the Jerusalem Talmud. At the same time, it may be assumed that various passages were taken directly from the Babylonian Talmud; and this assumption would prove the relatively later date of Ḳohelet Rabbah, though the end of the midrash, which is taken from Ḥag. 5a, must be considered as an addition.

A further characteristic indication of the late composition of the work is the fact that in the comments on Eccl. v. 5 and vii. 11 passages from Pirḳe Abot are quoted, with a reference to this treatise (comp. Wayiḳra R. xvi.), and in the comment on v. 8 several smaller treatises are mentioned. In the same comment on v. 8, at the beginning of a proem in Wayiḳra Rabbah xxii., a modification of the passage in the latter is made which gives ample proof that the Midrash Ḳohelet was written at a later time than the other midrashic works mentioned. In Wayiḳra Rabbah the passage reads: "Even what is superfluous on the earth is a part of the whole; and also the things which thou regardest as superfluous to the revealed Torah, as the prescriptions relating to fringes, phylacteries, and mezuzah, they also belong to the idea of the revealed Torah." In the Midrash Ḳohelet it reads: "The things which thou regardest as superfluous to the Torah, as the tosafot of Rebbi's school and those of R. Nathan and the treatise on proselytes and slaves ["Hilkot Gerim wa-'Abadim"], they also were revealed to Moses on Mt. Sinai, and treatises like 'Hilkot Ẓiẓit Tefillin u-Mezuzot' belong to the sum total of the Torah."

As Zunz assumes (G. V. p. 266), the Midrash Ḳohelet belongs to the time of the middle midrashim. On the other hand, the author of Midrash Ḳohelet must not be charged with "proceeding entirely in the spirit of later compilers" merely because, in connection with certain Bible texts, he repeats accepted or approved passages which were written upon the same or similar texts. Such repetitions are frequently found in the earlier midrashim. In Midrash Ḳohelet the same comments are found on Eccl. i. 2 as on vi. 12; on i. 3 as on xi. 9; on i. 13 as on iii. 10; on iii. 16 as on x. 4; on vi. 1 as on ix. 13; and on vii. 11 as on ix. 10; etc. Verses ii. 24, iii. 13, v. 17, viii. 15 receive the same explanation; and it is interesting to note that the Epicurean and hedonistic view expressed in them—that for all of man's troubles his only compensation is the gratification of the senses: eating, drinking, and taking pleasure—is interpreted allegorically and given a religious significance:

Wherever eating and drinking are spoken of in this way, the pleasure is meant which the study of the Bible and the performance of good works afford; as it is written (ch. viii. 15): 'it accompanies him בעמלו ["in his labor"], which must be interpreted as בעולמו ["in his world"]': not eating and drinking accompany man to the grave, but the Torah and the good works which he performs.

The following connected passage on Eccl. ii. 4-8 may serve to indicate the manner in which in this midrash the allegorical interpretation is connected with the simple literal interpretation; it also shows how the author, in order to explain a passage, has fused the material collected from different sources, and illustrates his use of stories and of foreign words (the Bible text of Ecclesiastes is shown in bold):

R. Abba bar Kahana said: 'Solomon commanded spirits whom he sent to India to fetch water for watering. I made me pools of water: fish-ponds [πισκίνη] wherewith to water a forest full of trees;—this is the land of Israel; as it is written, "And the king put them in the house of the forest of Lebanon" (I Kings x. 17). I got me servants and maidens; as it is written, "All the Nethinim, and the children of Solomon's servants, were three hundred ninety and two" (Neh. vii. 60). I had servants born in my house; as it is written, "and those officers provided victual for King Solomon . . . they lacked nothing" (I Kings v. 7).

R. Ḥama bar Ḥanina said: 'At Solomon's table there were carrots [comp. Deut. R. i. 5] in summer and cucumbers in winter; they were eaten throughout the year. I had great possessions of great and small cattle; as it is written (I Kings v. 3), "u-barburim abusim." What does that mean? The scholars say, "Animals from Barbary" [Βαρβαρία] . . . . I gathered me also silver and gold; as it is written, "And the king made silver to be in Jerusalem as stones" (I Kings x. 27). Is it possible?—like the stones on the roads and in the yards, and they were not stolen? No, there were stones eight and ten ells long. And the peculiar treasure of kings; as it is written, "And all the kings of the earth sought the presence of Solomon" (II Chron. ix. 23),—והמדינות [lit. "and of the provinces"] is to be read מדיינת ["the disputing woman"], that is, the Queen of Sheba, who disputed with him in her wisdom, and asked him questions, and could not vanquish him; as it is written, "She came to prove him with hard questions" (I Kings x. 1). I gat me men singers and women singers, and the delights of the sons of men,—baths (δημόσια) and male and female demons [שדה, שדות, taken in the sense of שדים, "demons"] who heated them.'

R. Ḥiyya bar Nehemiah said: 'Did Scripture intend to make us acquainted with Solomon's wealth? It probably refers only to the Torah: I made me great works; as it is written, "And the tables were the work of God" (Ex. xxxii. 16). I builded me houses,—those are synagogues and schoolhouses. I planted me vineyards,—those are the rows of scholars, who sit in rows [like vines] in the vineyard. I made me gardens and orchards [lit. "paradises"],—those are the great mishnayot, such as the mishnah of R. Ḥiyya Rabbah and that of R. Hoshaiah Rabbah, and that of Bar Ḳappara. I planted trees in them of all kinds of fruit,—that is the Talmud, which is contained in them. I made me pools of water,—those are the derashot. To water therewith the wood that bringeth forth trees,—those are the children who learn.'

R. Joshua b. Levi interpreted the passage as referring to Israel on its entry into the country: ' I made me great works,—"When ye be come into the land of your habitations . . . and will make a burnt offering . . . unto the Lord" (Num. xv. 2, 3). I builded me houses,—"and houses full of all good things" (Deut. vi. 11). I planted me vineyards,—"vineyards and olive-trees which thou plantedst not" (ib.).'

Hadrian the Accursed said to R. Joshua b. Hananiah: 'The Torah says: "A land wherein thou shalt eat bread without scarceness, thou shalt not lack anything in it" (ib. viii. 9). Can you bring me three things that I ask for?' 'What are they?' 'Pepper, pheasants [φασιανός], and silk [μέταξα].' He brought pepper from Niẓḥanah, pheasants from Ẓaidan [Sidon], or, as another says, from 'Akberi, and silk from Gush Ḥalab.

R. Levi said: ' To water therewith the wood that bringeth forth trees. The land of Israel did not even lack cane for arrows. I got me servants and maidens,—"And a mixed multitude" (Ex. xii. 38). And had servants born in my house,—those are the Gibeonites, whom Joshua turned into hewers of wood and drawers of water (Josh. ix. 27). I also had great possessions of great and small cattle,—"a very great multitude of cattle" (Num. xxxii. 1). I gathered me also silver and gold; as it is written, "He brought them forth also with silver and gold" (Ps. cv. 37). And the peculiar treasure of kings and of the provinces,—that is the booty of Og and Midian.'"

The Midrash Ḳohelet published by Solomon Buber in the Midrash Zuṭa in 1894 is different from the work discussed here. It is probably merely an extract with some additions. It is noteworthy that the author of the Yalḳuṭ knew only this midrash to Ecclesiastes, but in a more complete form than it is found in the printed edition.

This article incorporates text from the 1901–1906 Jewish Encyclopedia, a publication now in the public domain.