The word may derive from the semitic root N-TZ-H.[1] The ending -it is the feminine adjectival suffix, used here to form a feminine singular noun. The original meaning is a "tassel" or "lock," as in the Book of Ezekiel where Ezekiel is picked up by an angel and carried by a "lock" (Hebrew tzitzit) of hair. In English-language academic texts on Judaica the term is sometimes rendered "show-fringes."[2] In the Hebrew Bible the use is singular, but the feminine plural tzitziyot is found in later texts. The Septuagint translation is "tassels" (Greek plural kraspeda κράσπεδα, from kraspedon κράσπεδον singular).

The Torah states in Numbers 15:38: "Speak to the children of Israel, and say to them, that they shall make themselves fringes on the corners of their garments throughout their generations, and they shall put on the corner fringe a blue (tekhelet) thread." Wearing the tzitzit is also commanded in Deuteronomy 22:12: "You shall make yourself twisted threads, on the four corners of your garment with which you cover yourself."

Fringes, tzitziyot, today are attached to the tallit and tallit katan. The tallit katan itself is commonly referred to as tzitzit. According to the Torah, the purpose of wearing tzitzit is to remind Jews of their religious obligations. In addition, it serves as a reminder of the Exodus from Egypt (Numbers 15:40). The Talmud equates its observance with that of all the mitzvot. Maimonides (Commentary on Pirkei Avot 2:1) includes it as a major commandment along with circumcision and the Passover offering.

The tassel (tzitzit) on each corner is made of four strands, which must be made with intent. These strands are then threaded and hang down, appearing to be eight. (It is customary that each of the four strands is made of eight fine threads, known as kaful shemoneh). The four strands are passed through a hole (or according to some: two holes) 1-2 inches (25 to 50 mm) away from the corner of the cloth. There are numerous customs as to how to tie the tassels. The Talmud explains that the Bible requires an upper knot (kesher elyon) and one wrapping of three winds (hulya). The Talmud enjoined that between 7 to 13 hulyot be tied, and that "one must start and end with the color of the garment." As for the making of knots in between the hulyot, the Talmud is inconclusive, and as such poskim ("devisors of Jewish law") have interpreted this requirement in various ways.[3] The Talmud described tying assuming the use of tekhelet dye, however, following the loss of the source of the dye, various customs of tying were introduced to compensate for the lack of this primary element.

Though many methods exist, the one that gained the widest acceptance can be described as follows:

The four strands of the tzitzit are passed through holes near the four corners of the garment (Shulchan Aruch Orach Chaim 11:9-11,15) that are farthest apart (10:1). Four tzitzyot are passed through each hole (11:12-13), and the two groups of four ends are double-knotted to each other at the edge of the garment near the hole (11:14,15). One of the four tzitzit is made longer than the others (11:4); the long end of that one is wound around the other seven ends and double-knotted; this is done repeatedly so as to make a total of five double knots separated by four sections of winding, with a total length of at least four inches, leaving free-hanging ends that are twice that long (11:14).[4]

Before tying begins, declaration of intent is recited: L'Shem Mitzvat Tzitzit ("for the sake of the commandment of tzitzit").

Blue and white tzitzit knotted in the Sephardi style, the all white is Ashkenazi. Note the difference between the 7-8-11-13 scheme and uninterrupted windings (between the knots) on the Ashkenazi, vs. the 10-5-6-5 scheme and ridged winding on the Sfaradi tzitzit.

The two sets of stands are knotted together twice, and then the shamash (a longer strand) is wound around the remaining seven strands a number of times (see below). The two sets are then knotted again twice. This procedure is repeated three times, such that there are a total of five knots, the four intervening spaces being taken up by windings numbering 7-8-11-13, respectively. The total number of winds comes to 39, which is the same number of winds if one were to tie according to the Talmud's instruction of 13 hulyot of 3 winds each. Furthermore, the number 39 is found to be significant in that it is the gematria (numerical equivalent) of the words: "The Lord is One" Deuteronomy 6:4). Others, especially Sephardi Jews, use 10-5-6-5 as the number of windings, a combination that represents directly the spelling of the Tetragrammaton (one of God's names).

Rashi, a prominent Jewish commentator, bases the number of knots on a gematria: the word tzitzit (in its Mishnaic spelling) has the value 600. Each tassel has eight threads (when doubled over) and five sets of knots, totalling 13. The sum of all numbers is 613, traditionally the number of mitzvot (commandments) in the Torah. This reflects the concept that donning a garment with tzitzyot reminds its wearer of all Torah commandments.

Maimonides disagrees with Rashi, pointing out that the Biblical spelling of the word tzitzit has only one yod rather than two (giving it a gematria of 590 plus 13), thus adding up to the total number of 603 rather than 613. He points out that in the Biblical quote "you shall see it and remember them", the singular form "it" can refer only to the "p'til" ("thread") of tekhelet. The tekhelet strand serves this purpose, explains the Talmud, for the blue color of tekhelet resembles the ocean, which in turn resembles the sky, which in turn is said to resemble God's holy throne - thus reminding all of the divine mission to fulfill His commandments.

Color of the strings 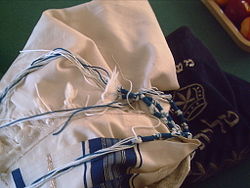 A set of tzitzyot with blue tekhelet thread

Tekhelet (תכלת) is color dye which the Hebrew Bible commands the Jews to use for one, two, or four of the eight half-strings hanging down. At some point in Jewish history, the source of the dye was lost and since then, Jews have worn plain white tzitzyot without any dyes. Tekhelet, which appears 48 times in the Tanakh - translated by the Septuagint as iakinthinos (Greek: ὑακίνθινος, blue) - is a specific blue dye produced from a creature referred to as a chilazon, other blue dyes being unacceptable (Tosefta). Some explain the black stripes found on many traditional prayer shawls as representing the loss of this dye.

Where tekhelet is used, only one thread in each fringe is dyed with it, the rest being left white or self-coloured. The dyed thread is always made of wool, regardless of the material of the garment or the other threads.

The other threads in the tzitzit (all the threads, where tekhelet is not used) are described as "white". This may be interpreted either literally (by Rama) or as meaning the same colour as the main garment (Rambam). Normally, the garment itself is white so that the divergence does not arise.

Similarly the threads may be made either of wool or of the same fabric as the garment; again many authorities recommend using a woollen garment so that all views are satisfied.

A karaite pair of tzitzyot

Karaites wear tzitzyot with blue threads in them. In contrast to Rabbinic Judaism, they believe that the tekhelet (the "blue"), does not refer to a specific dye. The traditions of Rabbinic Judaism used in the knotting of the tzitzit are not followed, so the appearance of Karaite tzitzit can be quite different from that of Rabbanite tzitzit. Contrary to some claims, Karaites do not hang tzitzit on their walls.

The modern Ebionite Movement distinguishes between tzitziyot (fringe) and p'tiylot (strings, cords) the latter being all tekhelet, or sky-blue derived from any source containing dibromoindigo. Any shade or variation from greenish blue, to turquoise, and darker, or a range naturally occurring in the dyeing is acceptable. Any style of knots and windings is allowable however most use the most typical 7-8-11-13 configuration. Garments must have both fringe and cords to satisfy the commandment as interpreted by Ebionites. In addition to the talit or talit katan, the p'tiylot might be tied into a long black scarf.

In archaeology and secular scholarship

Some archaeologists and non-traditional secular Biblical scholars speculate as to the source of the tradition. According to the modern documentary hypothesis, the reference to tzitzit in Numbers comes from the Priestly Code, while that from Deuteronomy comes from the Deuteronomic Code and hence they date to around the late 8th century BCE and late 7th century BCE respectively, some time after the practice began to be in use.[5] The custom however, clearly predates these codes, and was not limited to Israel; images of the custom have been found on several ancient Near East inscriptions in contexts suggesting that it was practiced across the Near East.[6] Some scholars believe that the practice among ancients originated due to the wearing of animal skins, which have legs at each corner, and that later fabrics symbolized the presence of such legs, first by the use of amulets, and later by tzitzit.[6]