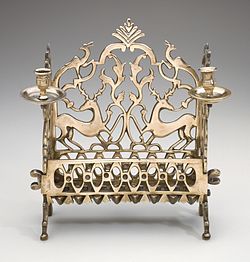 Hanukkah Lamp, Eastern Galicia or Western Ukraine, 18th to mid-19th century from the collection of The Jewish Museum (New York) 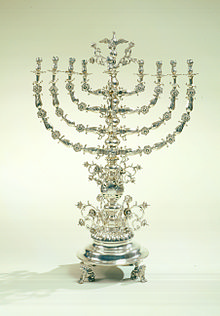 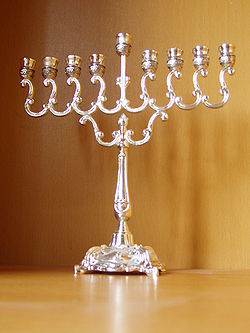 The Hanukkah menorah (Hebrew: מנורת חנוכה m'noraht khanukkah, pl. menorot) (also Hebrew: חַנֻכִּיָּה‎ hanukiah, or chanukkiyah, pl. hanukiyot/chanukkiyot, or Yiddish: חנוכּה לאמפּ khanike lomp, lit.: Hanukkah lamp) is, strictly speaking, a nine-branched candelabrum lit during the eight-day holiday of Hanukkah, as opposed to the seven-branched menorah used in the ancient Temple or as a symbol. The ninth holder, called the shamash ("helper" or "servant"), is for a candle used to light all other candles. The menorah is among the most widely produced articles of Jewish ceremonial art. The seven branched menorah is a traditional symbol of Judaism, along with the Star of David.[1]

Hanukkah celebrates the re-dedication of the Temple after the successful Jewish revolt against the Seleucid monarchy. The Jews found only enough ritually pure olive oil to light the menorah for one day, but the supply supposedly lasted eight days until a new supply could be obtained. In celebration of this happenstance, the Hanukkah menorah has eight branches for eight candles or oil lamps.

In addition to the shamash, on the first night one candle is placed in the holder on the far right, and is lit using either the shamash or a different candle or match. Each night afterwards for the next seven nights, one additional candle is kindled. The night's blessings are started over the newest candle. So the candles are placed in the Hanukkah menorah from right to left and kindled from left to right.[2] The manner of lighting one additional candle each night follows the opinion of the House of Hillel, which was accepted as Jewish law. The House of Shammai disagreed; it held that eight candles should be kindled the first night, seven the second night, and so on down to one candle on the last night.[3]

The lights can be candles or oil lamps. Electric lights are sometimes used and are acceptable in places where open flame is not permitted, such as a hospital room. 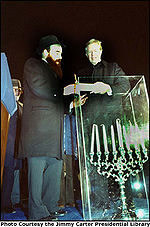 The menorah is often displayed in public around Hanukkah time. Elected officials often participate in publicly lighting the menorah. The Chabad-Lubavitch movement is well associated with public lighting ceremonies, which it has done since a directive from their last Rebbe, Menachem Mendel Schneerson, in 1987.

Since 1979, the White House has been represented at the lighting of a national menorah in celebration of Hanukkah, beginning with the attendance of President Jimmy Carter in the ceremony in Lafayette Park. In 2009, both White House Chief of Staff Rahm Emanuel and Governor Arnold Schwarzenegger lit the menorah.[4][5] Additionally, beginning with President Bill Clinton in 1993, a Hanukkah menorah was lit in the Oval Office of the White House, and in 2001, President George W. Bush began the annual tradition of a White House Hanukkah Party in the White House residence, which includes a menorah candle lighting ceremony.

The world's largest menorah is in Manado in Indonesia; a country with a Jewish population of around 20 people only. It stands at 62 feet height. [7] Another big menorah is in New York City and stands at 32 feet and is lit at Fifth Avenue and 59th Street in Manhattan near Central Park. A 4,000-pound structure, it is the work of Israeli artist Yaacov Agam. Because of the menorah’s height, Con Edison assists the lighting by using a crane to lift each person to the top.

In the United States, the public display of menorot and Christmas trees on public grounds has been the source of legal battles, due the separation of church and state. Specifically, in the 1989 County of Allegheny v. ACLU case,the majority of the US Supreme Court ruled that the public display of menorot and Christmas trees did not violate the Establishment Clause because the two symbols were not endorsements of the Jewish or Christian faith, rather the two items are part of the same winter-holiday season, which the court found, had attained a secular status in U.S. society.

In the English-speaking diaspora, the lamp is most commonly called a "Hanukkah menorah," or simply "menorah" for short, whereas in Modern Hebrew it is exclusively called a chanukkiyah, and the Hebrew word menorah simply means "lamp". The term chanukkiyah was coined at the end of the nineteenth century in Jerusalem by the wife of Eliezer Ben Yehuda, the reviver of the Hebrew language. 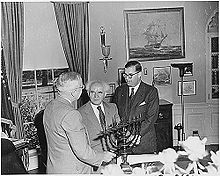 U.S. President Harry S. Truman in the Oval Office, receiving a Hanukkah Menorah as a gift from the Prime Minister of Israel, David Ben-Gurion (center). To the right is Abba Eban, the Ambassador of Israel to the United States.

Many museums have notable collections of Hanukkah menorot, including the Israel Museum, the Metropolitan Museum of Art,[8] and the Jewish Museum, which owns the Lindo lamp.[9] Outside of the Knesset, or Israeli parliament, there is a 5 metre high bronze menorah called the Knesset Menorah.

Modern menorot, menorot with less-traditional designs, are gaining in popularity with hundreds of new designs coming out since 2007.[10] There are websites dedicated to celebrating the modern menorah.[11] One popular type of modern menorah is the modular menorah: menorot made up of several different pieces which can be re-arranged each of the eight nights of Hanukkah. To be kosher, one candle holder sits higher than the others for the shamash, the worker candle, the one which is used to light the other candles.[12]