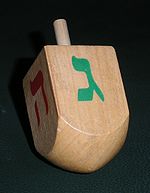 A dreidel (Yiddish: דרײדל dreydl plural: dreydlekh,[1] Hebrew: סביבון‎ Sevivon) is a four-sided spinning top, played with during the Jewish holiday of Hanukkah.

Each side of the dreidel bears a letter of the Hebrew alphabet: נ (Nun), ג (Gimel), ה (Hei), ש (Shin), which together form the acronym for "נס גדול היה שם" (Nes Gadol Hayah Sham – "a great miracle happened there"). These letters also form a mnemonic for the rules of a gambling game played with a dreidel: Nun stands for the Yiddish word nisht ("nothing"), Hei stands for halb ("half"), Gimel for gants ("all"), and Shin for shtel arayn ("put in"). In Israel, the fourth side of most dreidels is inscribed with the letter פ (Pei), rendering the acronym, נס גדול היה פה, Nes Gadol Hayah Poh—"A great miracle happened here" referring to the miracle occurring in the land of Israel. Some stores in Haredi neighbourhoods sell the ש dreidels. 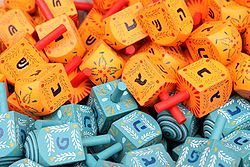 Dreidels for sale at Mahane Yehuda market in Jerusalem

The Yiddish word "dreydl" comes from the word "dreyen" ("to turn", compare to "drehen", meaning the same in German). The Hebrew word "sevivon" comes also from the root "SBB" ("to turn") and was invented by Itamar Ben-Avi (the son of Eliezer Ben-Yehuda) when he was 5 years old. Hayyim Nahman Bialik used a different word, "kirkar" (from the root "KRKR" – "to spin"), in his poems,[2] but it was not adopted into spoken Hebrew.

Some Jewish commentators, such as Ja'cob, ascribe symbolic significance to the markings on the dreidel. One commentary, for example, connects the four letters with the four exiles to which the nation of Israel was historically subject—Babylonia, Persia, Greece, and Rome.[3]

While not a mandated (mitzvah) for Hanukkah (the only mandated mitzvot are lighting candles and saying the full hallel), spinning the dreidel is a traditional game played during the holiday and has become one of the symbols associated with Hanukkah.

Rules of the game

Each player begins with an equal number of game pieces (usually 10–15). The game pieces can be any object, such as chocolate gelt, pennies, or raisins.

In 2009, Good Morning America published a story on Dreidel Renaissance reporting on the rising popularity of the dreidel.[7] Dreidel games that have come out on the market since 2007 include No Limit Texas Dreidel,[8] a cross between traditional dreidel and Texas Hold'em poker, invented by a Judaica company called ModernTribe.[9] Other new dreidel games include Stacabees[10] and Maccabees.[11]

In many cases, childhood enjoyment of dreidels has led to interest in collecting them in adulthood.[12] Jewish institutions such as the Spertus Institute of Jewish Studies, Yeshiva University and Temple Emanu-El in New York, house dreidel collections, as do museums such as the Spinning Top and Yo-Yo Museum in Burlington, Wisconsin.[13]