Colombian people are from a multiethnic Spanish speaking nation in South America called Colombia. Colombians are predominantly Roman Catholic and are a mixture of Europeans, Africans, and Amerindians.

With approximately 43.6 million people in 2006,[13] Colombia is the third-most populous country in Latin America, after Brazil and Mexico. 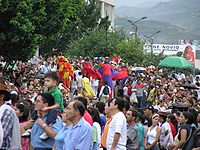 Colombian people at the Cali's Fair.

Movement from rural to urban areas was very heavy in the mid-twentieth century, but has since tapered off. The urban population increased from 31% of the total population in 1938, to 57% in 1951 and about 70% by 1990. Currently the figure is about 77%. Thirty cities have a population of 100,000 or more. The nine eastern lowlands departments, constituting about 54% of Colombia's area, have less than 3% of the population and a density of less than one person per square kilometer (two persons per sq mi.). Colombia's total population in 2015 is projected to be more than 52 million.[14]

The country has a diverse population that reflects its colourful history and the peoples that have populated here from ancient times to the present. The historic amalgam of the different main groups forms the basics of Colombia's current demographics: European immigrants, Amerindian peoples, Africans, Asians, Middle Easterners and other recent immigrants.

Many of the indigenous peoples were absorbed into the mestizo population, but the remaining 700,000 currently represent over eighty-five distinct cultures.

The European immigrants were primarily Spanish colonists, but a small number of other Europeans (i.e. Portuguese, Dutch, German, Italian, French, Swiss, Belgians, English and a small colony of Irish when the country was under British rule) and also many North Americans migrated to the Caribbean region in the late 19th and early 20th centuries, and in smaller numbers Polish, Lithuanian, Hungarian and Croatian communities immigrated during the Second World War and the Cold War.

Black Africans were brought as slaves, mostly to the coastal lowlands, beginning early in the 16th century, and continuing into the 19th century. Other immigrant populations include Asians and Middle Easterners, particularly Lebanese, Jordanians, Syrians, Chinese, Japanese and Koreans. 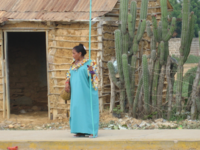 The Wayuu represent the largest indigenous ethnic group in Colombia.

Before the Spanish colonization of the region that would become the country of Colombia, the territory was the home to many different indigenous peoples. Today more than fifty different indigenous ethnic groups inhabit Colombia. Most of them speak languages belonging to the Chibchan and Cariban language families.

Historically there are established 567 reserves (resguardos) for indigenous peoples and they are inhabited by more than 800,000 people; the 1991 constitution established their native languages as official in their territories, most of them have bilingual education (Native and Spanish). Some of the largest indigenous groups are the Wayuu,[17] the Arhuacos, the Muisca, the Kuna people, the Witoto, the Páez, the Tucano and the Guahibo. The departamentos with the biggest Indian population are Cauca, Guajira and Guainia. 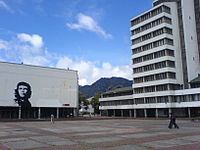 Sixty percent of students complete primary schooling (5 years) and move onto secondary schooling (6 years). Most primary schools are private. Approximately 80 percent of Colombian children enter school, but they usually join a preschool academy until age 6 and then go to school. The school year extends from February to November in the capital city while in many other cities it extends from August to June. Primary education is free and compulsory for nine years for children between 6 and 12 years of age. The net primary enrollment (percentage of relevant age-group) in 2001 was 86.7 percent. The completion rate (percentage of age-group) for children attending elementary school (primaria) in 2001 totaled 89.5 percent. In many rural areas, teachers are poorly qualified, and only five years of primary school are offered. Secondary education (educación media) begins at age 11 and lasts up to six years. Secondary-school graduates are awarded the diploma (high-school diploma). Net secondary enrollment in 2001 was 53.5 percent. School life expectancy in 2001 was 11.1 years. Total public spending as a percentage of gross domestic product (GDP) in 2001 was 4.4 percent – one of the highest rates in Latin America – as compared with 2.5 percent at the end of the 1980s. Government expenditures on education in 1999 totaled 19.7 percent of total government spending. The ratio of pupils to teachers in 2001 in primary school was 26:1 and in secondary school, 19:2. Colombia has 24 public universities. A total of 92.5 percent of the population is literate (male: 92.4 percent; female: 92.6 percent), according to a 2003 estimate. Literacy is at 93 percent in urban areas, but only 67 percent in rural areas. People in Colombia are educated in Spanish (see also Colombian Spanish). The second most spoken language is English.

The National Administrative Department of Statistics (DANE) does not collect religious statistics, and accurate reports are hard to obtain. Based on various studies, more than 95% of the population adheres to Christianity,[18] in which a huge segment of the population, between 81% and 90%, practices Roman Catholicism. About 1% of Colombians practice indigenous religions.

Under 1% practice Judaism, Islam, Hinduism, and Buddhism. Despite strong numbers of adherents, around 60% of respondents to a poll by El Tiempo report that they do not practice their faith actively.[19]

The Colombian constitution guarantees religious freedom, but also states that the State "is not atheist or agnostic, nor indifferent to Colombians' religious sentiment." Religious groups are readily able to obtain recognition as organized associations, but some smaller ones face difficulty in obtaining recognition as religious entities, which is required to offer chaplaincy services in public facilities.[19]