Metaphor
This article is about the figure of speech. For other uses, see Metaphor (disambiguation). 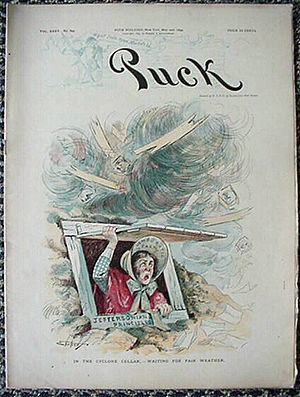 A political cartoon from an 1894 Puck magazine by illustrator S.D. Ehrhart, shows a farm woman labeled "Democratic Party" sheltering from a tornado of political change.

A metaphor is a literary figure of speech that uses an image, story or tangible thing to represent a less tangible thing or some intangible quality or idea; e.g., "Her eyes were glistening jewels." Metaphor may also be used for any rhetorical figures of speech that achieve their effects via association, comparison or resemblance. In this broader sense, antithesis, hyperbole, metonymy and simile would all be considered types of metaphor. Aristotle used both this sense and the regular, current sense above.[1] With metaphor, unlike analogy, specific interpretations are not given explicitly.

Metaphors are comparisons that show how two things that are not alike in most ways are similar in one important way. A metaphor is more forceful (active) than an analogy, because metaphor asserts two things are the same, whereas analogy implies a difference; other rhetorical comparative figures of speech, such as metonymy, parable, simile and synecdoche, are species of metaphor distinguished by how the comparison is communicated.[1] The metaphor category also contains these specialised types:

Metaphors are created for the purpose of insightful close reading, usually for the purpose of better internal visualization and comparison to another concept from which one can draw his or her own conclusion. A 'dead metaphor' may appear transparent upon first glance. However, dead metaphors are the most common of all usages because of common cultural or origin specific universal meaning. "I just can't shake it" is an example of a universal metaphor that, because of its contextual reference has an established implied message. Interpretation of metaphorical speaking is 'in the eyes of the beholder.' Is the reader insightful enough to recognize a metaphor? Metaphorically speaking, "we should remove our blinders."

The term metaphor is also used for the following terms that are not a part of rhetoric:

History in literature and language

Metaphor is present in the oldest written Sumerian language narrative, the Epic of Gilgamesh:

In this example, the friend is compared to a stallion, a wild deer, and a leopard to indicate that the speaker sees traits from these animals in his friend (A comparison between two or more unlike objects). The death of Enkidu is described as a sleep, as something that seizes, as something that darkens one's face, and as something that stops one's breath. This description is a mixed metaphor, and is also an example of metonymy, another type of metaphor, because the characteristics of death are used to refer to death itself.

Therefore, the key aspect of a metaphor is a specific transference of a word from one context into another. With regard to the four kinds of metaphors which Aristotle distincts against each other the last one (transference by analogy) is the most eminent one so that all important theories on metaphor have a reference to this characterization.

The Greek plays of Sophocles, Aeschylus, and Euripides, among others, were almost invariably allegorical, showing the tragedy of the protagonists, either to caution the audience metaphorically about temptation, or to lambast famous individuals of the day by inferring similarities with the caricatures in the play.

Even when they are not intentional, they can be drawn between most writing or language and other topics. In this way it can be seen that any theme in literature is a metaphor, using the story to convey information about human perception of the theme in question.

Some recent linguistic theories view language as by its nature all metaphorical; or that language in essence is metaphorical.[7]

Metaphor as style in speech and writing

Viewed as an aspect of speech and writing, metaphor qualifies as style, in particular, style characterized by a type of analogy. An expression (word, phrase) that by implication suggests the likeness of one entity to another entity gives style to an item of speech or writing, whether the entities consist of objects, events, ideas, activities, attributes, or almost anything expressible in language. For example, in the first sentence of this paragraph, the word "viewed" serves as a metaphor for "thought of", implying analogy of the process of seeing and the thought process. The phrase, "viewed as an aspect of", projects the properties of seeing (vision) something from a particular perspective onto thinking about something from a particular perspective, that "something" in this case referring to "metaphor" and that "perspective" in this case referring to the characteristics of speech and writing.

As a characteristic of speech and writing, metaphors can serve the poetic imagination, enabling William Shakespeare, in his play "As You Like It", to compare the world to a stage and its human inhabitants players entering and exiting upon that stage;[8] enabling Sylvia Plath, in her poem "Cut", to compare the blood issuing from her cut thumb to the running of a million soldiers, "redcoats, every one";[9] and, enabling Robert Frost, in "The Road Not Taken", to compare one's life to a journey.[10]

Viewed also as an aspect of speech, metaphor can serve as a device for persuading the listener or reader of the speaker or writer's argument or thesis, the so-called rhetorical metaphor.

Metaphor as foundational to our conceptual system

Cognitive linguists emphasize that metaphors serve to facilitate the understanding of one conceptual domain, typically an abstract one like 'life' or 'theories' or 'ideas', through expressions that relate to another, more familiar conceptual domain, typically a more concrete one like 'journey' or 'buildings' or 'food'.[11][12] Food for thought: we devour a book of raw facts, try to digest them, stew over them, let them simmer on the back-burner, regurgitate them in discussions, cook up explanations, hoping they do not seem half-baked. Theories as buildings: we establish a foundation for them, a framework, support them with strong arguments, buttressing them with facts, hoping they will stand. Life as journey: some of us travel hopefully, others seem to have no direction, many lose their way.

More than just a figure of speech

Some theorists have suggested that metaphors are not merely stylistic, but that they are cognitively important as well. In Metaphors We Live By George Lakoff and Mark Johnson argue that metaphors are pervasive in everyday life, not just in language, but also in thought and action. A common definition of a metaphor can be described as a comparison that shows how two things that are not alike in most ways are similar in another important way. They explain how a metaphor is simply understanding and experiencing one kind of thing in terms of another. The authors call this concept a ‘conduit metaphor.’ By this they meant that a speaker can put ideas or objects into words or containers, and then send them along a channel, or conduit, to a listener who takes that idea or object out of the container and makes meaning of it. In other words, communication is something that ideas go into. The container is separate from the ideas themselves. Lakoff and Johnson give several examples of daily metaphors we use, such as “argument is war” and “time is money.” Metaphors are widely used in context to describe personal meaning. The authors also suggest that communication can be viewed as a machine: “Communication is not what one does with the machine, but is the machine itself.” (Johnson, Lakoff, 1980).[13]

Metaphors can also map experience between two nonlinguistic realms. In The Dream Frontier, Mark Blechner describes musical metaphors, in which a piece of music can "map" to the personality and emotional life of a person.[14]. Musicologist Leonard Meyer demonstrated how purely rhythmic and harmonic events can express human emotions. [15] There can also be a metaphoric mapping between other art forms and human experience. The art theorist Robert Vischer argued that when we look at a painting, we "feel ourselves into it" by imagining our body in the posture of a nonhuman or inanimate object in the painting. For example, the painting "The Solitary Tree" by Caspar David Friedrich shows a tree with contorted, barren limbs.[16][17] In looking at that painting, we imagine our limbs in a similarly contorted and barren shape, and that creates a feeling in us of strain and distress. Nonlinguistic metaphors may be the foundation of our experience of visual, musical,[18] dance,[19] and other art forms.

Нужен реферат?
Synonyms:
Similitude (without the signs of comparison), simile (expressed in a word)