Parable
For a comparison of parable with other kinds of stories, see Myth, legend, fairy tale, and fable. 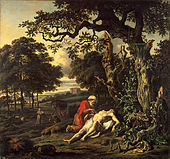 A parable is [1] a succinct story, in prose or verse, which illustrates one or more instructive principles, or lessons, or (sometimes) a normative principle. It differs from a fable in that fables use animals, plants, inanimate objects, and forces of nature as characters, while parables generally feature human characters. It is a type of analogy.[2]

Some scholars of the Canonical gospels and the New Testament apply the term "parable" only to the parables of Jesus,[3] though that is not a common restriction of the term. Parables such as "The Prodigal Son" are central to Jesus' teaching method in both the canonical narratives and the apocrypha.

The word "parable" comes from the Greek παραβολή (parabolē), meaning "comparison, illustration, analogy".[4] It was the name given by Greek rhetoricians to any fictive illustration in the form of a brief narrative. Later it came to mean a fictitious narrative, generally referring to something that might naturally occur, by which spiritual and moral matters might be conveyed.[5]

A parable is a short tale that illustrates universal truth, one of the simplest of narratives. It sketches a setting, describes an action, and shows the results. It often involves a character facing a moral dilemma, or making a questionable decision and then suffering the consequences. Though the meaning of a parable is often not explicitly stated, the meaning is not usually intended be hidden or secret but on the contrary quite straightforward and obvious.[6]

The defining characteristic of the parable is the presence of a prescriptive subtext suggesting how a person should behave or believe. Aside from providing guidance and suggestions for proper action in life, parables frequently use metaphorical language which allows people to more easily discuss difficult or complex ideas. Parables teach an abstract argument, using a concrete narrative which is more easily grasped.[5]

The parable can be distinguished from other narrative types which have a moral content, such as the apologue and the allegory, although this distinction has not always been clear.

The allegory is a more general narrative type, which covers any use of figurative metaphor. Like the allegory, the parable uses metaphor to make its point. But unlike allegory, the parable makes a single, unambiguous point. The allegory may have multiple noncontradictory interpretations, and may also have implications that are ambiguous or hard to interpret. As H.W. Fowler puts it in Modern English Usage, the object of both parable and allegory "is to enlighten the hearer by submitting to him a case in which he has apparently no direct concern, and upon which therefore a disinterested judgment may be elicited from him."[5] The parable, though, is more condensed than the allegory: a single principle comes to bear, and a single moral is deduced as it dawns on the reader or listener that the conclusion applies equally well to his own concerns.

Medieval interpreters of the Bible often treated Jesus' parables as allegories, with symbolic correspondences found for every element in the parables. Modern critics, beginning with Adolf Jülicher, regard these interpretations as inappropriate and untenable.[1] Jülicher held that Jesus' parables usually are intended to make a single important point, and most recent scholarship agrees.[3]

The parable is related to figures of speech such as the metaphor and the simile, but should not be identified with these.

A parable is like a metaphor in that it uses concrete, perceptible phenomena to illustrate abstract, ephemeral ideas. It could be said that a parable is a metaphor that has been extended to form a brief, coherent fiction. For example, Christian parables have recently been studied as extended metaphors.[7] However, "extended metaphor" is not in itself a sufficient description of parable; the characteristics of an extended metaphor are shared by many narrative types, including the allegory, the fable and the apologue.

Similarly, a parable also resembles a simile, i.e. a metaphorical construction in which something is said to be "like" something else (e.g. "The just man is like a tree panted by streams of water"). However, unlike a simile, a parable's parallel meaning is unspoken and implicit, though not ordinarily secret. 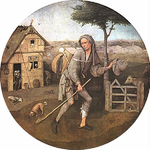 Parables are favored in the expression of spiritual concepts. The best-known source of parables in Christianity is the Bible, which contains numerous parables in the Gospels section of the New Testament. Jesus' parables. The New Testament parables are thought by scholars such as John P. Meier to have been inspired by mashalim, a form of Hebrew comparison.[3] Examples of Jesus' parables include "the Good Samaritan" and "the Prodigal Son". Mashalim from the Old Testament include the "parable of the ewe-lamb" told by Nathan in 2 Samuel 12:1-9, and that of "the woman of Tekoah" in 2 Samuel 14:1-13.

In Sufi tradition, parables ("teaching stories") are used for imparting lessons and values. Recent authors such as Idries Shah and Anthony de Mello have helped popularize these stories beyond Sufi circles.

Modern stories can be used as parables. A mid-19th-century parable, the "Parable of the Broken Window", exposes a fallacy in economic thinking.

Examples of parables include:

Synonyms:
Fable (in which what is stated as fact is probable, or which is founded on the ordinary incidents of daily life), apologue, story, short tale, fictitious narrative (intended to illustrate some spiritual truth)