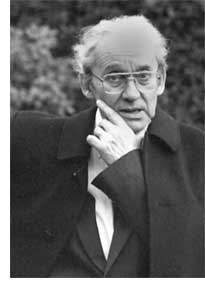 Paul Ricœur (born , in Valence ; died , in , France) was a French philosopher best known for combining phenomenological description with hermeneutic interpretation. As such, he is connected to two other major hermeneutic phenomenologists, and .

Ricœur was born in a devout family, making him a member of a religious minority in .

Ricœur's father died in a 1915 battle when Ricœur was only two years old. He was raised by his paternal grandparents and an aunt in with a small afforded to him as a war orphan. Ricœur, whose penchant for study was fueled by his family's Protestant emphasis on Bible study, was bookish and intellectually precocious. Ricœur received his "license" in 1933 from the and began studying philosophy at the Sorbonne in 1934, where he was influenced by . In 1935, he was awarded the second-highest mark in the nation for philosophy, presaging a bright future.

interrupted Ricœur's career, and he was drafted to serve in the French army in 1939. His unit was captured during the German invasion of France in 1940 and he spent the next five years as a prisoner of war. His detention camp was filled with other intellectuals such as who organized readings and classes sufficiently rigorous that the camp was accredited as a degree-granting institution by the government. During this time he read , who was to have a great influence on him. He also began a translation of 's "Ideas I".

Ricœur taught at the between 1948 and 1956, the only French university with a Protestant faculty of theology. In 1950, he received his submitting (as is customary in France) two theses: a "minor" thesis translating Husserl's "Ideas I" into French for the first time, with commentary, and a "major" thesis that he would later publish as "Le Volontaire et l'Involontaire". Ricœur soon acquired a reputation as an expert on phenomenology, then the ascendent philosophy in France.

In 1956, Ricœur took up a position at the Sorbonne as the Chair of General Philosophy. This appointment signaled Ricœur's emergence as one of France's most prominent philosophers. While at the Sorbonne, he wrote "Fallible Man" and "The Symbolism of Evil" published in 1960, and "Freud and Philosophy: An Essay on Interpretation" published in 1965. These works cemented his reputation. was an assistant to Ricœur during this time.

From 1965 to 1970, Ricœur was an administrator at the newly founded in suburban Paris. Nanterre was intended an experiment in progressive education, and Ricœur hoped that here he could create a university in accordance with his vision, free of the stifling atmosphere of the tradition-bound Sorbonne and its overcrowded classes. Nevertheless, Nanterre became a hotbed of protest during the student uprisings of May 1968. Ricœur was assaulted by a student mob and derided as an "old clown" and tool of the French government.

Disenchanted with French academic life, Ricœur taught briefly at the Catholic University of Louvain in Belgium, before taking a position at the Divinity School of the , where he taught from 1970 to 1985. His study culminated in "The Rule of Metaphor: Multi-disciplinary Studies of the Creation of Meaning of Language" published in 1975 and the three-volume "Time and Narrative" published in 1984, 1985, and 1988. Ricoeur gave the in 1985/86, published in 1992 as "Oneself as Another". This work built on his discussion of narrative identity and his continuing interest in the self.

"Time and Narrative" secured Ricœur's returned to France in 1985 as an intellectual superstar. His late work was characterised by a continuing cross-cutting of national intellectual traditions; for example, some of his latest writing engaged the thought of the American political philosopher .

On , , he was awarded with the second John W. Kluge Prize for Lifetime Achievement in the Human Sciences (shared with ).

Paul Ricœur died in his house of natural causes. French Prime Minister declared that "the humanist European tradition is in mourning for one of its most talented exponents".