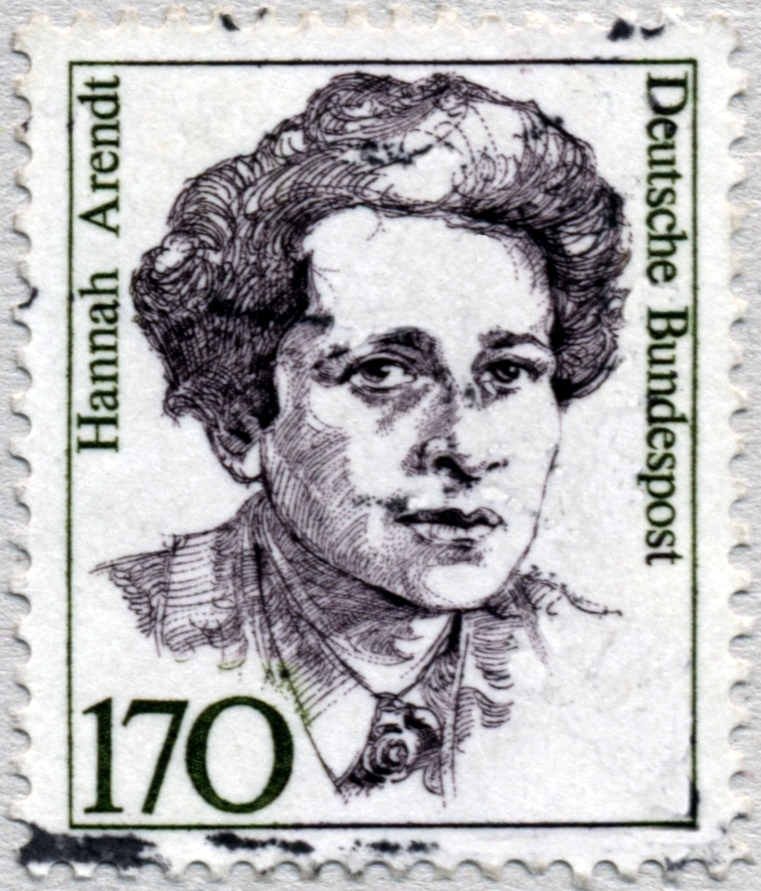 image_caption = German stamp issued in 1988 in the


Hannah Arendt (, – , ) was an influential German-Jewish . She has often been described as a , although she always refused that label on the grounds that philosophy is concerned with "man in the singular." She described herself instead as a political theorist because her work centers on the fact that "men, not Man, live on the earth and inhabit the world."

Hannah Arendt was born into a family of secular Germans in the city of Linden (now part of ), and grew up in and .

At the , she studied philosophy with , with whom she embarked on a long, stormy and romantic relationship for which she was later criticized because of Heidegger's support for the Nazi party while he was rector of Freiburg University.

In the wake of one of their breakups, Arendt moved to , where she wrote her on the concept of love in the thought of Saint Augustine, under the existentialist philosopher-psychologist .

The dissertation was published the same year, but Arendt was prevented from "," a prerequisite for teaching in German universities, because she was Jewish. She worked for some time researching before being interrogated by the , and thereupon fled Germany for . Here she met and befriended the literary critic and Marxist philosopher , her first husband's cousin. While in France, Arendt worked to support and aid Jewish refugees. She was imprisoned in but was able to escape after a couple of weeks.

However, with the German military occupation of northern France during World War II, and the deportation of Jews to s, even by the Vichy collaborator regime in the unoccupied south, Arendt was forced to flee France. In 1940, she married the German poet and philosopher , by then a former Communist Party member.

In 1941, Arendt escaped with her husband and her mother to the with the assistance of the American diplomat , who illegally issued visas to her and around 2500 other Jewish refugees. She then became active in the German-Jewish community in New York. In 1941-1945, she wrote a column for the German-language Jewish newspaper, "". From 1944, she directed research for the Commission of European Jewish Cultural Reconstruction and traveled frequently to Germany in this capacity. [ [http://www.haaretz.com/hasen/spages/777201.html Human, citizen, Jew - Haaretz - Israel News ] ]

After World War II she returned to Germany and worked for . Later she resumed relations with Heidegger, and testified on his behalf in a German hearing. She became a close friend of Jaspers and his Jewish wife, developing a deep intellectual friendship with him and began corresponding with Mary McCarthy. In 1950, she became a of the United States. [ [http://www.haaretz.com/hasen/spages/981970.html Dear Hannah - Haaretz - Israel News ] ] Arendt served as a visiting scholar at the , and . She also served as a professor on the at the , as well as at in New York City, and served as a fellow at and . In 1959, she became the first woman appointed to a full professorship at Princeton.

On her death at age 69 in 1975, Arendt was buried at in , where her husband taught for many years.

Arendt was instrumental in the creation of (SLE) at . She wrote a letter to the then president of Stanford University to convince the university to enact 's vision of a residentially-based humanities program.

Arendt's work deals with the nature of power, and the subjects of , , and . Much of her work focuses on affirming a conception of freedom which is synonymous with collective political action among equals.

Arendt theorizes freedom as public and associative, drawing on examples from the Greek "", American townships, the , and the s of the 1960s (among others) to illustrate this conception of freedom.

Another key concept in her work is "natality", the capacity to bring something new into the world, such as the founding of a government that endures.

Her first major book was "" (1951), which traced the roots of and in both and . The book was controversial because it suggested an essential identity between the two phenomena, which can be considered as completely separated in both origins and nature.

Arguably her most influential work, "The Human Condition" (1958) distinguishes between labour, work, and action, and explores the implications of these distinctions. Her theory of political action is extensively developed in this work.

Another of her important books is the collection of essays "Men in Dark Times". These intellectual biographies provide insight into the lives of some of the creative and moral figures of the 20th century, among them , , , , , and .

In her reporting of the Eichmann trial for "", which evolved into "" (1963), she coined the phrase "the " to describe Eichmann. She raised the question of whether is radical or simply a function of banality—the tendency of ordinary people to obey orders and conform to mass opinion without critically thinking about the results of their action or inaction. Arendt was extremely critical of the way that conducted the trial. She was also critical of the way that many Jewish leaders acted during the , which caused an enormous controversy and resulted in a great deal of animosity directed toward Arendt within the Jewish community. Her friend , a major scholar of Jewish Mysticism, broke off relations with her. She was criticized by many Jewish public figures for her coldness and lack of sympathy for the victims of the Shoah. Her book has only recently been translated into Hebrew. Arendt ended the book by endorsing the execution of Eichmann, writing:quote|Just as you supported and carried out a policy of not wanting to share the earth with the Jewish people and the people of a number of other nations—as though you and your superiors had any right to determine who should and who should not inhabit the world—we find that no one, that is, no member of the human race, can be expected to want to share the earth with you. This is the reason, and the only reason, you must hang.

Arendt published another book in the same year that was controversial in its own right: "", a study of the two most famous s of the 18th century. Arendt went against the grain of and leftist thought by contending that the was a successful revolution while the was not. Some saw in this argument a post-Holocaust anti-French sentiment. Nevertheless, it echoed that of . Arendt also argued that the revolutionary spirit had not been preserved in America because the majority of people had no role to play in politics other than voting. She admired 's idea of dividing the counties into townships, similar to the s that appeared during the Russian Revolution. Arendt's interest in such a "council system", which she saw as the only alternative to the state, continued all her life.

Her posthumous book, "The Life of the Mind" (1978, edited by Mary McCarthy), was incomplete at her death. Stemming from her at the in Scotland, this book focuses on the mental faculties of thinking and willing (in a sense moving beyond her previous work concerning the "vita activa"). In her discussion of thinking, she focuses mainly on and his notion of thinking as a solitary dialogue between me and myself. This appropriation of Socrates leads her to introduce novel concepts of conscience (which gives no positive prescriptions, but instead tells me what I cannot do if I would remain friends with myself when I re-enter the two-in-one of thought where I must render an account of my actions to myself) and morality (an entirely negative enterprise concerned with non-participation in certain actions for the sake of remaining friends with one's self). In her volume on Willing, Arendt, relying heavily on Augustine's notion of the will, discusses the will as an absolutely free mental faculty that makes new beginnings possible. In the third volume, Arendt was planning to engage the faculty of judgment by appropriating Kant's "Critique of Judgment", however she did not live to write it. Nevertheless, although we will never fully understand her notion of judging, Arendt did leave us with manuscripts ("Thinking and Moral Considerations", "Some Questions on Moral Philosophy,") and lectures ("Lectures on Kant's Political Philosophy" ) concerning her thoughts on this mental faculty. The first two articles were edited and published by Jerome Kohn, who was an assistant of Arendt and is a director of Hannah Arendt Library, and the last was edited and published by Ronald Beiner, who was taught by Arendt and is a professor of political science at the University of Toronto. Her papers were deposited at Bard College at the Stevenson Library in 1976, and comprise approximately 4,000 books, ephemera, and pamphlets from Arendt's last apartment. The college has begun digitally archiving some of the collection, which is available at http://www.bard.edu/arendtcollection/

* The is named in her honour.
* The German railway authority operates a Hannah Arendt Express between Karlsruhe and Hanover. [ [http://www.haaretz.com/hasen/spages/855456.html All aboard the Arendt express] , , ]
* The German post office has issued a Hannah Arendt commemorative stamp.
* Hannah-Arendt-Straße in the district of Berlin is named in her honor.

*The American Library of Congress has [http://memory.loc.gov/ammem/arendthtml/special.html The Role of Experience in Hannah Arendt's Political Thought: Three Essays] by Jerome Kohn, Director, [http://www.newschool.edu/gf/centers/research-centers.htm#Arendt Hannah Arendt Center] ,New School University. With link to Arendt's [http://memory.loc.gov/ammem/arendthtml/mharendtFolder05.html papers] .
* [http://dissentmagazine.org/article/?article=388 "Arendt's Judgment"] by in "Dissent" magazine.
* [http://linguafranca.mirror.theinfo.org/br/9911/plotz.html "Thinking Out Loud"] Review of a book of essays on Arendt, in Lingua Franca.
* [http://www.signandsight.com/features/510.html "The philosophical Madonna"] On the occasion of the 30th anniversary of Hannah Arendt's death, recalls his relationship with the philosopher and reflects on her and on his generation at signandsight.com
* , [http://www.forward.com/articles/hannah-arendt-100-years-later/ Hannah Arendt, 100 Years Later] , "The Forward". On the occasion of the centenary of her birth
* [http://www.npr.org/templates/story/story.php?storyId=6268489 Hannah Arendt and the Study of Evil] , NPR audio interview with Elisabeth Young-Bruehl on the centenary of Arendt's birth
* [http://www.goethe.de/ins/gb/lon/ges/phi/en1224327.htm Thinking with Body and Soul] : Interview with the historian about Hannah Arendt, by Volker Maria Neumann, February 2006.