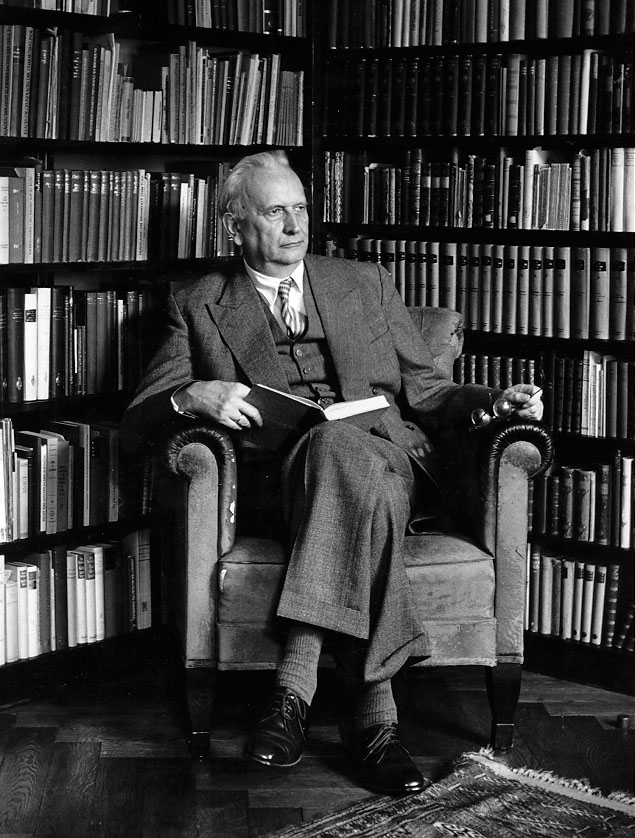 Karl Theodor Jaspers (, – , ) was a German and who had a strong influence on modern , and .

Jaspers was born in in 1883 to a mother from a local farming community, and a jurist father. He showed an early interest in , but his father's experience with the legal system undoubtedly influenced his decision to study law at university. It soon became clear that Jaspers did not particularly enjoy law, and he switched to studying in 1902.

Jaspers graduated from medical school in 1909 and began work at a in where had worked some years earlier. Jaspers became dissatisfied with the way the medical community of the time approached the study of and set himself the task of improving the psychiatric approach. In 1913 Jaspers gained a temporary post as a teacher at . The post later became permanent, and Jaspers never returned to clinical practice.

At the age of 40 Jaspers turned from psychology to , expanding on themes he had developed in his psychiatric works. He became a renowned philosopher, well respected in Germany and . In 1948 Jaspers moved to the in . He remained prominent in the philosophical community until his death in in 1969.

Jaspers' dissatisfaction with the popular understanding of mental illness led him to question both the diagnostic criteria and the methods of clinical psychiatry. He published a revolutionary paper in 1910 in which he addressed the problem of whether was an aspect of personality or the result of biological changes. Whilst not broaching new ideas, this article introduced a new method of study. Jaspers studied several patients in detail, giving biographical information on the people concerned as well as providing notes on how the patients themselves felt about their symptoms. This has become known as the "biographical method" and now forms the mainstay of modern psychiatric practice.Jaspers set about writing his views on mental illness in a book which he published in 1913 as "General Psychopathology". The two volumes which make up this work have become a classic in the psychiatric literature and many modern diagnostic criteria stem from ideas contained within them. Of particular importance, Jaspers believed that psychiatrists should diagnose symptoms (particularly of ) by their form rather than by their content. For example, in diagnosing a , the fact that a person experiences visual phenomena when no sensory stimuli account for it (form) assumes more importance than what the patient sees (content).

Jaspers felt that psychiatrists could also diagnose s in the same way. He argued that clinicians should not consider a belief delusional based on the content of the belief, but only based on the way in which a patient holds such a belief (see for further discussion). Jaspers also distinguished between "primary" and "secondary delusions". He defined primary delusions as autochthonous meaning arising without apparent cause, appearing incomprehensible in terms of normal mental processes. (This is a distinctly different use of the term autochthonous than its usual medical or sociological meaning of indigenous.) Secondary delusions, on the other hand, he classified as influenced by the person's background, current situation or mental state.

Jaspers considered primary delusions as ultimately 'un-understandable,' as he believed no coherent reasoning process existed behind their formation. This view has caused some controversy, and the likes of and have criticised it, stressing that taking this stance can lead therapists into the complacency of assuming that because they do not understand a patient, the patient is deluded and further investigation on the part of the therapist will have no effect.

Contributions to Philosophy and Theology

Most commentators associate Jaspers with the philosophy of , in part because he draws largely upon the existentialist roots of Nietzsche and Kierkegaard, and in part because the theme of individual freedom permeates his work.Fact|date=February 2007

In "Philosophy" (3 vols, 1932), Jaspers gave his view of the history of philosophy and introduced his major themes. Beginning with modern science and empiricism, Jaspers points out that as we question reality, we confront borders that an empirical (or scientific) method simply cannot transcend. At this point, the individual faces a choice: sink into despair and resignation, or take a toward what Jaspers calls "Transcendence". In making this leap, individuals confront their own limitless freedom, which Jaspers calls "Existenz", and can finally experience authentic existence.

Transcendence (paired with the term "The Encompassing" in later works) is, for Jaspers, that which exists beyond the world of time and space. Jaspers' formulation of Transcendence as ultimate non-objectivity (or no-thing-ness) has led many philosophers to argue that ultimately, Jaspers became a monist, though Jaspers himself continually stressed the necessity of recognizing the validity of the concepts both of subjectivity and of objectivity.

Although he rejected explicit religious doctrines, including the notion of a personal God, Jaspers influenced contemporary theology through his philosophy of transcendence and the limits of human experience. Mystic traditions influenced Jaspers himself tremendously, particularly those of and of . He also took an active interest in Eastern philosophies, particularly , and developed the theory of an , a period of substantial philosophical and religious development. Jaspers also entered public debates with , wherein Jaspers roundly criticized Bultmann's "" of Christianity.

Jaspers also wrote extensively on the threat to human freedom posed by modern science and modern economic and political institutions. During World War II, he had to abandon his teaching post because his wife was Jewish. After the war he resumed his teaching position, and in his work "The Question of German Guilt" he unabashedly examined the culpability of Germany as a whole in the atrocities of 's .

Jaspers's major works, lengthy and detailed, can seem daunting in their complexity. His last great attempt at a systematic philosophy of Existenz — "Von Der Wahrheit" (On Truth) — has not yet appeared in English. However, he also wrote accessible and entertaining shorter works, most notably "Philosophy is for Everyman".

Commentators often compare Jaspers' philosophy to that of his contemporary, . Indeed, both sought to explore the meaning of being () and existence (). While the two did maintain a brief friendship, their relationship deteriorated - due in part to Heidegger's affiliation with the Nazi party, but also due to the (probably over-emphasized) philosophical differences between the two.

The two major proponents of phenomenological , (a student of Jaspers) and (Jaspers's successor at Heidelberg) both display Jaspers's influence in their works.

Other important work appeared in "Philosophy and Existence" (1938). For Jaspers, the term "existence" ("Existenz") designates the indefinable experience of freedom and possibility; an experience which constitutes the authentic being of individuals who become aware of "the encompassing" by confronting suffering, conflict, guilt, chance, and death.

Jaspers held Kierkegaard and Nietzsche to be two of the most important figures in post-Kantian philosophy. In his compilation, "The Great Philosophers", he wrote:

I approach the presentation of Kierkegaard with some trepidation. Next to Nietzsche, or rather, prior to Nietzsche, I consider him to be the most important thinker of our post-Kantian age. With and , an epoch had reached its conclusion, and our prevalent way of thinking - that is, the , natural-scientific one - cannot really be considered as philosophy.

Jaspers is too often seen as the heir of Nietzsche and Keirkegaard to whom he is in many ways less close than to Kant...the Kantian antinomies and Kant's concern with the realm of decision, freedom, and faith have become exemplary for Jaspers. And even as Kant "had to do away with knowledge to make room for faith," Jaspers values Nietzsche in large measure because he thinks that Nietzsche did away with knowledge, thus making room for Jaspers' philosophic faith"...

This is supported by Jaspers' essay "On My Philosophy" (link below),

"While I was still at school Spinoza was the first. Kant then became the philosopher for me and has remained so...Nietzsche gained importance for me only late as the magnificent revelation of nihilism and the task of overcoming it."