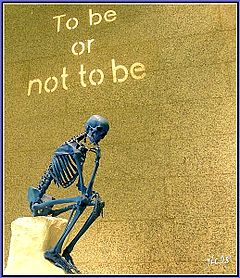 To be or not to be, Casa das Ciencias, A Coruña

Dasein (German pronunciation: [ˈdaːzaɪn]) is a German word famously used by Martin Heidegger in his magnum opus Being and Time, which generally translates to being in its ontological and philosophical sense (cf. personhood, and reality).

The word Dasein has been used by several philosophers before Heidegger, most notably Ludwig Feuerbach, with the meaning of human "existence" or "presence". It is derived from da-sein, which literally means being-there/there-being, though Heidegger was adamant that this was an inappropriate translation of Dasein. In German, Dasein is the vernacular term for existence, as in I am pleased with my existence (ich bin mit meinem Dasein zufrieden). According to Heidegger, however, it must not be mistaken for a subject, that is something definable in terms of consciousness or a self. Heidegger was adamant about this distinction, which carried on Nietzsche's critique of the subject. Dasein, as a human being that is constituted by its temporality, illuminates and interprets the meaning of Being in Time. Heidegger chose this term as a synonym for "human entity" in order to emphasize the critical importance "Being" has for our understanding and interpretation of the world. Some scholars have been confused on this issue, arguing that for Heidegger "Dasein" denoted some sort of structured awareness or an institutional "way of life"[1] but the textual evidence for this claim is not strong.[original research?]

This entity which each of us is himself…we shall denote by the term “Dasein.” (BT 27)

In the question about the meaning of Being, what is primarily interrogated is those entities which have the character of Dasein. (BT 65)

…it is possible to individualize [the question of the meaning of Being] very precisely for any particular Dasein. (BT 63)

…Dasein is essentially an entity with Being-in, it can explicitly discover those entities which it encounters environmentally, it can know them…(BT 84)

As we can see from these quotations from Heidegger's Being and Time, the replacement of "Dasein" with "awareness" or "way of life" would render the ontological difference between entities and the being of entities incoherent. Establishing this difference is the general motif running through Being and Time.

Heidegger used the concept of Dasein to uncover the primal nature of "Being" (Sein). Like Nietzsche, Heidegger criticized the notion of substance, arguing that Dasein is always a being engaged in the world. The fundamental mode of Being is not that of a subject or of the objective but of the coherence of Being-in-the-world. This is the ontological basis of Heidegger's work. There can be no Cartesian "abstract agent" - the agent emerges out of his environment.[citation needed]

On Heidegger's account, traditional language, logical systems, and beliefs obscure Dasein's nature from itself. Beings are Dasein even when they are ontologically wrapped up in a tradition which obscures the authentic choice to live within and transmit this tradition. In this case Dasein still authentically chooses the tradition when it is confronted by a paradox within the tradition and must choose to dismiss the tradition or dismiss the experience of being confronted with choice.[citation needed]

Heidegger attempted to maintain the definition of Dasein as we all are, in our average everydayness. Dasein does not spring into existence upon philosophical exploration of itself. Heidegger intended Dasein as a concept, in order to provide a stepping stone in the questioning of what it means to be. When Dasein contemplates this, what seems (absurdly) circular in ontic terms, is recursive in ontological sense, because it brings the necessary appearance of time to the center of attention.[citation needed]

In Being and Time, Heidegger opens by positing that the potentialities of Dasein's Being extend beyond the realms disclosed by positive science or in the history of metaphysics. "Scientific research is not the only manner of Being which this entity can have, nor is it the one which lies closest. Moreover, Dasein itself has a special distinctiveness as compared with other entities [...]" What distinguishes Dasein from other existent entities is that "[...] in its very Being, that Being is an issue for it." Dasein's very nature poses a philosophical (or ontological) problem for it. Thus, we see[original research?] Heidegger, being Dasein, attempt to tackle this innate dilemma in his philosophical works.

Some have argued for an origin of Dasein in Chinese philosophy and Japanese philosophy: according to Tomonobu Imamichi, Heidegger's concept of Dasein was inspired — although Heidegger remained silent on this — by Okakura Kakuzo's concept of das-in-der-Welt-sein (being-in-the-worldness, worldliness) expressed in The Book of Tea to describe Zhuangzi's philosophy, which Imamichi's teacher had offered to Heidegger in 1919, after having followed lessons with him the year before.[2]

For Karl Jaspers, the term "Dasein" meant existence in its most minimal sense, the realm of objectivity and science, in opposition to what Jaspers called "Existenz", the realm of authentic being. Due to the drastically different use of the term "Dasein" between the two philosophers, there is often some confusion in students who begin with either Heidegger or Jaspers and subsequently study the other.

In Philosophy (3 vols, 1932), Jaspers gave his view of the history of philosophy and introduced his major themes. Beginning with modern science and empiricism, Jaspers points out that as we question reality, we confront borders that an empirical (or scientific) method can simply not transcend. At this point, the individual faces a choice: sink into despair and resignation, or take a leap of faith toward what Jaspers calls Transcendence. In making this leap, individuals confront their own limitless freedom, which Jaspers calls Existenz, and can finally experience authentic existence.

But if Existenz is a subjective state of being, how can it be evaluated and analyzed by the individual? Jaspers suggests social interactions offer guidelines that individuals either adopt or reject. In other words, Existenz is a solitary state derived from the values of society. As with Sartre’s idea of “mirrors” (“Hell is other people!”), Jaspers writes of the self as “reflection in someone else’s authentic self.” Unless we know what others think and expect of us, we cannot decide who we are or want to be.

Jaspers, therefore, presents a view in which all people depend upon society for self-definition, even if the act of definition is a rejection of society’s values. No one is truly apart from society. In the extreme, a hermit defines his or her self as a complete rejection of social structures, but there is no “hermit” without a society from which to seek shelter. As a result, individuals experience a constant sensation of conflict: a desire to define the self freely while requiring society for that definition.[3]

The term Dasein is much exploited in Existential Semiotics by Eero Tarasti.