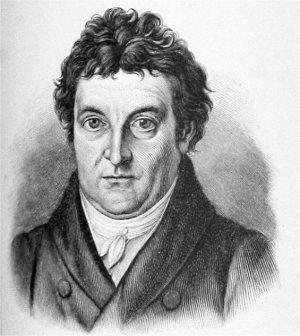 Johann Gottlieb Fichte (, – , ) was a German philosopher. He was one of the founding figures of the philosophical movement known as , a movement that developed from the theoretical and ethical writings of . Fichte is often perceived as a figure whose philosophy forms a bridge between the ideas of Kant and the German Idealist . Recently, philosophers and scholars have begun to appreciate Fichte as an important philosopher in his own right due to his original insights into the nature of or . Like and Kant before him, the problem of and motivated much of his philosophical rumination. Fichte also wrote political philosophy, and is thought of by some as the father of .

Fichte was born in , . In 1780, he began study at the theology seminary. In 1784, without completing his degree, Fichte ended his studies. Fichte worked as a private tutor in Zürich, and in 1790 he became engaged to Johanna Rahn, who happened to be the niece of the famous poet . In 1790, Fichte began to study the works of Kant, which were to have a lasting effect on the trajectory of his life and thought. Not long after meeting Kant in , Fichte published his first work, "" (1792), a book that investigates the connections between divine revelation and Kant's . The first edition of the book was published, without Kant or Fichte's knowledge, without Fichte's name and signed preface; it was thus mistakenly thought to be a new work by Kant himself. [Traditionally, it has been assumed that either the omission was an accident or a deliberate attempt by the publisher to move copies. In either case, Fichte did not plan it, and in fact only heard of the accident much later; he writes to his fiancée: "Why did I have to have such utterly strange, excellent, unheard-of good luck?" See Garrett Green's Introduction to "Attempt at a Critique of All Revelation". Cambridge: Cambridge University Press, 1978.] Everyone, including the first reviews of the book, assumed Kant was the author; when Kant cleared the confusion and openly praised the work and author, Fichte's reputation skyrocketed: "...the most shocking and astonishing news...nobody but Kant could have written this book. This amazing news of a third sun in the philosophical heavens has set me into such confusion..." [Letter from Jens Baggeson to Karl Reinhold. Quoted in Editor's Introduction to Fichte, "Early Philosophical Writings". London: Cornell University Press, 1988.]

Fichte died of at the age of fifty-two. His son, , also made contributions to .

In mimicking Kant's difficult style, Fichte produced works that were barely intelligible. "He made no hesitation in pluming himself on his great skill in the shadowy and obscure, by often remarking to his pupils, that 'there was only one man in the world who could fully understand his writings; and even he was often at a loss to seize upon his real meaning.' " [Robert Blakely, "History of the Philosophy of Mind", Vol. IV, p. 114, London: Longmans, 1850] This remark was often mistakenly attributed to Hegel.

Fichte did not endorse Kant's argument for the existence of noumena, of "things in themselves", the supra-sensible reality beyond the categories of human . Fichte saw the rigorous and atic separation of "things in themselves" (noumena) and things "as they appear to us" (phenomena) as an invitation to . Rather than invite such skepticism, Fichte made the radical suggestion that we should throw out the notion of a noumenal world and instead accept the fact that does not have a grounding in a so-called "real world". In fact, Fichte achieved fame for originating the argument that consciousness is not grounded in "anything" outside of itself. His student (and critic), Schopenhauer, wrote:

In his work "Foundations of Natural Right" (1796), Fichte argued that self-consciousness was a social phenomenon -- an important step and perhaps the first clear step taken in this direction by modern philosophy. A necessary condition of every subject's self-awareness, for Fichte, is the existence of other rational subjects. These others call or summon (Aufforderung) the subject or self out of its unconsciousness and into an awareness of itself as a free individual.

Fichte's account proceeds from the general principle that the I must set itself up as an individual in order to set itself up at all, and that in order to set itself up as an individual it must recognize itself as it were to a calling or summons (Aufforderung) by other free individual(s) — called, moreover, to limit its own freedom out of respect for the freedom of the other. The same condition applied and applies, of course, to the other(s) in its development. Hence, mutual recognition of rational individuals turns out to be a condition necessary for the individual 'I' in general. This argument for is so central to the conception of selfhood developed in the "Science of Logic" (aka 'Wissenschaftslehre') that Fichte, in his later lectures (his "Nova Methodo"), incorporated it into his revised presentation of the very foundations of his system, where the summons takes its place alongside original feeling, which takes the place of the earlier Anstoss (see below) as both a limit upon the absolute freedom of the I and a condition for the positing of the same.

This idea is an elaboration and extension of his central philosophical work, "The Science of Knowledge" (aka 'Wissenschaftslehre'), where he showed that consciousness of the self depends upon resistance or a check by something that is understood as not part of the self yet is not immediately ascribable to a particular sensory perception.

The I ('Das Ich') itself sets this situation up for itself (it posits itself). To 'set' (setzen) does not mean to 'create' the objects of consciousness. The principle in question simply states that the essence of an I lies in the assertion of ones own self-identity, i.e., that consciousness presupposes self-consciousness. Such immediate self-identify, however, cannot be understood as a psychological fact, nor as an act or accident of some previously existing substance or being. It is an action of the I, but one that is identical with the very existence of this same I. In Fichte's technical terminology, the original unity of self-consciousness is to be understood as both an action and as the product of the same I, as a fact and/or act (Tathandlung), a unity that is presupposed by and contained within every fact and every act of empirical consciousness, though it never appears as such therein.

The 'I' must set (setzen) itself in order to be an 'I' at all; but it can set itself only insofar as it sets itself up as limited. Moreover, it cannot even set for itself its own limitations, in the sense of producing or creating these limits. The finite I cannot be the ground of its own passivity. Instead, for Fichte, if the 'I' is to set itself off at all, it must simply discover itself to be limited, a discovery that Fichte characterizes as a repulse or resistance (Anstoss) to the free practical activity of the I. Such an original limitation of the I is, however, a limit for the I only insofar as the I sets it out as a limit. The I does this, according to Fichte's analysis, by setting its own limitation, first, as only a feeling, then as a sensation, then as an intuition of a thing, and finally as a summons of another person. The Anstoss thus provides the essential impetus that first sets in motion the entire complex train of activities that finally result in our conscious experience both of ourselves and others as empirical individuals and of the world around us.

Though Anstoss (spelled Anstoß in German) plays a similar role as the does in philosophy, unlike Kant, Fichte's Anstoss is not something foreign to the I. Instead, it denotes the I's original encounter with its own finitude. Rather than claim that the Not-I is the cause or ground of the Anstoss, Fichte argues that non-I is set-up by the I precisely in order to explain to itself the anstoss, that is, in order to become conscious of anstoss.

Though the Wissenschaftslehre demonstrates that such an Anstoss must occur if self-consciousness is to come about, it is quite unable to deduce or to explain the actual occurrence of such an Anstoss — except as a condition for the possibility of consciousness. Accordingly, there are strict limits to what can be expected from any a priori deduction of experience, and this limitation, for Fichte, equally applies to Kant's transcendental philosophy.

According to Fichte, transcendental philosophy can explain that the world must have space, time, and causality, but it can never explain why objects have the particular sensible properties they happen to have or why I am this determinate individual rather than another. This is something that the I simply has to discover at the same time that it discovers its own freedom, and indeed, as a condition for the latter.

Fichte also developed a theory of the state based on the idea of self-sufficiency. In his mind, the state should control international relations, the value of money, and remain an .

Because of this necessity to have relations with other rational beings in order to achieve consciousness, Fichte writes that there must be a 'relation of right,' in which there is a mutual recognition of rationality by both parties.

In an earlier work from 1793 dealing with the ideals and politics of the French Revolution: "Beiträge zur Berichtigung der Urteile des Publikums über die Französische Revolution" (Contributions to the Correction of the Public's Judgment concerning the French Revolution), he called Jews a "state within a state" that could "undermine" the German nation (GA I/1: pp. 292-293). In regard to Jews getting "civil rights", he wrote that this would only be possible if one managed "to cut off all their heads in one night, and to set new ones on their shoulders, which should contain not a single Jewish idea." (ibid.) Fichte was used by nationalist circles before and during the First World War to enhance national sentiments.

Some of Fichte's most well-known works are from the last decade of his life, where he gave lecture courses in Berlin to the public at large on a wide variety of topics.

These include two works from 1806: "The Characteristics of the Present Age", where Fichte outlines his theory of different historical and cultural epochs, and a semi-mystical work: "The Way Towards the Blessed Life; or, the Doctrine of Religion", which contains his most extensive thoughts on religion. And in 1808 he gave a series of speeches in French-occupied Berlin, "Addresses to the German Nation", which was to become his most controversial work for its German chauvinism.

In 1810, in part because educational themes in "Addresses...", although the University itself was designed along lines put forward by and in part because of his earlier work at Jena University, Fichte was made the first Chair of Philosophy at the new , where he was also made rector.

Fichte also continued to give private and university lectures on further versions of his "Wissenschaftslehre". However, apart from a brief work of barely 15 pages from 1810: "The Science of Knowledge in its General Outline", Fichte did not publish any of these lecture courses. A small selection was published thirty years after Fichte's death by his son, but the vast majority has only recently been made available in the last decades of the twentieth century, in the "Gesamtausgabe". These writings include substantially reworked versions of the "Wissenschaftslehre" from the years 1810, 1811 and 1813, as well as a "Doctrine of Right" (1812), a "Doctrine of Ethics" (1812).