James Graham, 1st Marquess of Montrose (25th October 1612 – 21 May 1650) was a Scottish nobleman and soldier, who initially joined the Covenanters in the Wars of the Three Kingdoms, but subsequently supported King Charles I as the English Civil War developed. From 1644 to 1646, and again in 1650 he fought a civil war in Scotland on behalf of the King and is generally referred to in Scotland as simply the Great Montrose.

James Graham became 5th Earl of Montrose by his father's death in 1626. He was educated at the University of St Andrews, and at the age of seventeen married Magdalene Carnegie,[1] daughter of David Carnegie (afterwards Earl of Southesk). They were parents of James Graham, 2nd Marquess of Montrose. 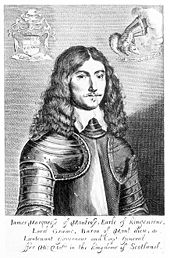 In 1638, after King Charles I had attempted to impose an Anglican-oriented prayer book upon the reluctant Scots, resistance spread throughout the country, eventually leading to the Bishops' Wars. Montrose joined the party of resistance, and was for some time one of its most energetic champions. He had nothing puritanical in his nature, but he shared in the ill-feeling aroused by the political authority King Charles had given to the bishops. He signed the National Covenant, and was sent to suppress the opposition which arose around Aberdeen and in the country of the Gordons. Three times Montrose entered Aberdeen, where he succeeded in his object, on the second occasion carrying off the head of the Gordons, the Marquess of Huntly, as a prisoner to Edinburgh (though in so doing, for the first and last time in his life, he violated a safe-conduct). He was a leader of the delegation who subsequently met at Muchalls Castle to parlay regarding the 1638 confrontation with the Bishop of Aberdeen. With the Earl Marischal he led a force of 9000 men across the Causey Mounth through the Portlethen Moss to attack Royalists at the Bridge of Dee.[2] This set of events was an element of Charles I decision to grant sweeping reforms to the Covenanters.

In July 1639, after the signature of the Treaty of Berwick, Montrose was one of the Covenanting leaders who visited Charles. The change of policy on his part, eventually leading to his support for the king, arose from his wish to get rid of the bishops without making presbyters masters of the state. His was essentially a layman's view of the situation. Taking no account of the real forces of the time, he aimed at an ideal form of society in which the clergy should confine themselves to their spiritual duties, and the king should maintain law and order. In the Scottish parliament which met in September, Montrose found himself in opposition to Archibald Campbell, 1st Marquess of Argyll, who had made himself the representative of the Presbyterian and national party, and of the middle classes. Montrose, on the other hand, wished to bring the king's authority to bear upon parliament to defeat Argyll, and offered the king the support of a great number of nobles. He failed, because Charles could not even then consent to abandon the bishops, and because no Scottish party of any weight could be formed unless Presbyterianism were established ecclesiastically.

Rather than give way, Charles prepared in 1640 to invade Scotland. Montrose was of necessity driven to play something of a double part. In August 1640 he signed the Bond of Cumbernauld as a protest against the particular and direct practicing of a few, in other words, against the ambition of Argyll. But he took his place amongst the defenders of his country, and in the same month he displayed his gallantry in action at the forcing of the Tyne at Newburn. After the invasion had been crowned with success, Montrose still continued to cherish his now hopeless policy. On 27 May 1641 he was summoned before the Committee of Estates and charged with intrigues against Argyll, and on the 11th of June he was imprisoned in Edinburgh Castle. Charles visited Scotland to give his formal assent to the abolition of Episcopacy, and upon the king's return to England Montrose shared in the amnesty which was tacitly accorded to all Charles's partisans.

Scotland in the Wars of the Three Kingdoms

See also: Scotland in the Wars of the Three Kingdoms and English Civil War 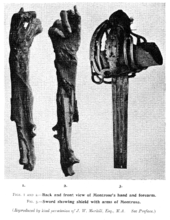 A souvenir of Montrose's hanging: His right arm (seen front and back) and sword.

Highlanders had never before been known to combine together, but Montrose knew that many of the West Highland clans, who were largely Catholic, detested Argyll and his Campbell clansmen, none more so than the MacDonalds who with many of the other clans rallied to his summons. The Royalist allied Irish Confederates sent 2000 disciplined Irish soldiers led by Alasdair MacColla across the sea to assist him. In two campaigns, distinguished by rapidity of movement, he met and defeated his opponents in six battles. At Tippermuir and Aberdeen he routed Covenanting levies; at Inverlochy he crushed the Campbells, at Auldearn, Alford and Kilsyth his victories were obtained over well-led and disciplined armies.[3]

The fiery enthusiasm of the Gordons and other clans often carried the day, but Montrose relied more upon the disciplined infantry from Ireland. His strategy at Inverlochy, his tactics at Aberdeen, Auldearn and Kilsyth furnished models of the military art, but above all his daring and constancy marked him out as one of the greatest soldiers of the war. His career of victory was crowned by the great Battle of Kilsyth on 15 August 1645.

Now Montrose found himself apparently master of Scotland. In the name of the king, who now appointed him lord lieutenant and captain-general of Scotland, he summoned a parliament to meet at Glasgow on 20 October, in which he no doubt hoped to reconcile loyal obedience to the king with the establishment of a non-political Presbyterian clergy. That parliament never met. Charles had been defeated at the Battle of Naseby on 14 June, and Montrose must come to his help if there was to be still a king to proclaim. David Leslie, the best of the Scottish generals, was promptly dispatched against Montrose to anticipate the invasion. On 12 September he came upon Montrose, who had been deserted by his Highlanders and guarded only by a little group of followers, at Philiphaugh. He won an easy victory. Montrose cut his way through to the Highlands; but he failed to organize an army. In September 1646 he embarked for Norway.

A poem by Montrose is inscribed on his tomb, "Scatter my ashes, strew them in the air/Lord, since thou knowest where all these atoms are...." Argyll and Montrose were both buried in St. Giles' Cathedral.

Montrose was to appear once more on the stage of Scottish history. In June 1649, burning to revenge the death of the king, he was restored by the exiled Charles II to the now nominal lieutenancy of Scotland. Charles however did not scruple shortly afterwards to disavow his noblest supporter in order to become a king on terms dictated by Argyll and Argyll's adherents.[clarification needed] In March 1650 Montrose landed in Orkney to take the command of a small force which he had sent on before him. Crossing to the mainland, he tried in vain to raise the clans, and on 27 April he was surprised and routed at the Battle of Carbisdale in Ross-shire. His forces were defeated in battle but he escaped. After wandering for some time he was surrendered by Neil MacLeod of Assynt at Ardvreck Castle, to whose protection, in ignorance of MacLeod's political enmity, he had entrusted himself. He was brought a prisoner to Edinburgh, and on 20 May sentenced to death by the parliament. He was hanged on the 21st, with Wishart's laudatory biography of him put round his neck. To the last he protested that he was a real Covenanter and a loyal subject.

His head was removed and stood on the "prick on the highest stone" of the Old Tolbooth outside St Giles Cathedral from 1650 until the beginning of 1661.[4]

On 7 January 1661 the mangled torso of Montrose was disinterred from the Burgh Muir and placed in a coffin, carried under a velvet canopy to the Tolbooth, where his head was reverently removed from the spike. The procession was accompanied by the nobles and gentry on horseback, with many thousands following on foot; colours were flying, drums beating, trumpets sounding, muskets cracking, and cannon roaring from the castle.[5] His limbs brought from the towns (Glasgow, Perth, Stirling and Aberdeen) to which they had been sent, and the whole placed in a sumptuous coffin, which lay in state in Holyrood Palace. A splendid funeral was held in Saint Giles's church on 11 May 1661.[6][7]

Montrose's torso would have been originally given to his friends; he was, however, the subject of an excommunication which was why it was originally buried in unconsecrated ground. In 1650 his niece, Lady Napier, had sent men by night to take away his heart. This relic she placed in a steel case made from his sword and placed the whole in a gold filigree box, which had been presented to her family by a Doge of Venice. The heart in its case were retained by the Napier family for several generations until lost amidst the confusion of the French Revolution.[8]

Principal authorities for Montrose's career are Wishart's Res gestae, etc. (Amsterdam, 1647); Patrick Gordon's Short Abridgment of Britanes Distemper (Spalding Club); and the comprehensive work of Napier, Memorials of Montrose, is abundantly documented, containing Montrose's poetry, in which is included his celebrated lyric "My dear and only love." [1]

There are several modern works on Montrose, including two biographies by John Buchan and one by Dame Veronica Wedgwood, Montrose: The King's Champion by Max Hastings.