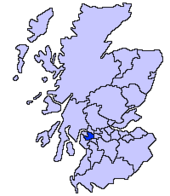 Map of Scotland showing the district of Renfrewshire, where the Cochranes lived.

Traditionally the original ancestor of the Clan Cochrane in Scotland was a Scandinavian Viking who settled in what is now known as Renfrewshire.[2] It is evident that the name is of territorial origin and that the Cochranes took the name of the lands in the ancient Barony of Cochrane. The origin of the name itself is believed to be derived from two Gaelic words which jointly mean The Roar of the Battle or Battle Cry.[2]

The Cochranes do not appear on any written record until 1262 when the name of Waldenus de Coveran occurs on an ancient charter for a grant of land to Walter Stewart the Earl of Menteith.[2]

Other early bearers of the name are William de Coughran in 1296; and Robert de Cochrane in about 1360.[3]

In 1556 William Cochrane, chief of Clan Cochrane obtained a charter of confirmation for the lands of Cochrane from Mary, Queen of Scots.[2]

In 1584 chief William Cochrane, along with seceral others was charged with being involved in the murder of Patrick Maxwell but Cochrane was never brought to trial.[2]

During the Civil War of the 17th century the Clan Cochrane supported the royalist cause.[2] Throughout the war clansman Sir John Cochrane travelled extensively abroad as the king's representative.[2] The chief 'Lord Cochrane' fought in the royalist army at the Battle of Preston (1648).[2]

In 1669 the Cochrane chief's title was raised from a Lord to an Earl when Sir William Cochrane was created 1st Earl of Dundonald. After the death of the 7th Earl, the descendants of Sir William's second son became the Earls.[2]

During the Jacobite rising of 1745 – 1746 the main part of Clan Cochrane supported the British government and in the government army under General Sir John Cope there were two Cochrane officers; Captain John Cochrane and Captain Basil Cochrane, both were clansmen related to the chief, Earl of Dundonald. Both were taken prisoner at the Battle of Prestonpans in 1745. However on the Jacobite side William Cochrane of Ferguslie shared in the victory.[2]

Later throughout the eighteenth and nineteenth centuries the Cochranes distinguished themselves in both land and naval forces, and came to be nicknamed the "Fighting Cochranes.[2]

The Cochranes are known to have played an important role during the Napoleonic Wars. The most noteworthy of these fighting Cochranes was Thomas Cochrane, 10th Earl of Dundonald (1775–1860) who joined the Royal Navy at the age of 18. The high point of his career was when a brig under his command with a crew of only fifty-four managed to capture a Spanish frigate with a crew of over three hundred sailors and 32 heavy guns. He followed this by defending Trinidad Castle against the French in 1808.[2] He later became the commander of Chile's navy and assisted that country, along with Peru, Brazil and Greece, to become independent. He was known as Lord Cochrane. He is buried at Westminster Abbey in Westminster, London.[2]

The father of the present chief, who was the fourteenth Earl served with the Black Watch, then during World War Two, he served in North Africa, Sicily, Italy and Greece. When the war ended, he served with the War Office and in Germany until he retired in 1953. Sir Ralph Cochrane the youngest son of Thomas Cochrane, 1st Baron Cochrane of Cults, was a British pilot and Royal Air Force officer, perhaps best known for his role in Operation Chastise–the famous "Dambusters" raid.[citation needed]

The chief of the Name and Arms of Cochrane is Iain Alexander Douglas Blair Cochrane, 15th Earl of Dundonald, 10th Baron Cochrane of Dundonald as well as 10th Baron of Paisley and Ochiltree. He is also the 5th Marquess of Maranhão in Brazil.[4] 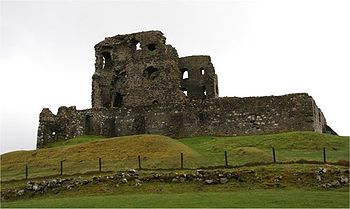 Castles that have belonged to the Cochranes have included: