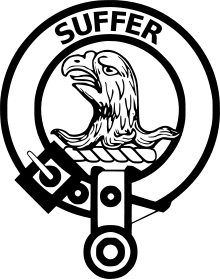 Crest badge suitable to be worn by members of Clan Haldane.

Origins of the Haldanes of Gleneagles

[The following text is copied verbatim from The Haldanes of Gleneagles, General Sir J. Aylmer L. Haldane, 1929, William Blackwood & Sons, Ltd., London and Edinburgh, which book is in the Public Domain since 2004. While this text may appear on some message boards, it is NOT a copyright violation. Contact John Haldane for more information.]

HISTORIANS and genealogists have ascribed various origins to the family Haldane. Sir James Dalrymple, Nisbet, and others have suggested its descent from a Danish chief called Haldanus, or from an Anglo-Norman, Brien1 by name, whose son Bernard came to Scotland during the reign of King William the Lion (1165-1214), and was given by him a manor on the Border.2 The legend of Danish descent, which probably arose from the resemblance of the family name to that of this chief, is not borne out by the Kelso charters. In one of these,3 which is dated between 1165 and 1171, Bernard son of Brien is recorded, with some circumlocution, as granting to the monks of Kelso Abbey a carucate4 of land, ' which they have in the town of Hauden, and which they had before I came to Hauden in perpetual alms by the same boun¬daries by which they had the same before I came to Hauden.' A later charter from Bernard's nephew to the monks, which confirms the earlier gift, is couched in precisely the same words.5 A perusal of these two documents shows unmistakably that before Bernard obtained his lands on the border, they bore the name of Hauden, and proves that his surname - or rather that of his successor and his descendants, for he himself never dropped his designation of 'son of Brien ' - was derived from the title by which the lands were known, and from it alone.

This Bernard, son of Brien was the undoubted founder of the Haldane family in Scotland. He was a frequent witness to royal and other charters, and these, through their being dated at different places, show that he belonged to the royal retinue and probably filled some post near the person of the King. That he was a man of birth and consequence is obvious from the fact that he appears as a witness in company with some of the most important persons in the kingdom. Take, for example, the charter by King William to the abbey of Scone, dated at Dunfermline between 1165 and 1171.6 This charter, which confirms to the abbey all liberties that had been granted to it by the King's elder brother Malcolm IV., was witnessed, amongst others, by Nichol, the Chancellor of Scotland Duncan, 5th Earl of Fife, who was Justiciar of the northern kingdom for more than twenty years, and who, 'as in the case of former Earls of Fife, is given precedence over the other Earls of Scotland as witnesses to the King's charters;' 7 Walter Fitz-Alan, the first High Stewart of Scotland, who had great possessions in the lowlands ; David Ollifard, godson of David I., and the earliest known holder of the high office of Justiciar;8 a Richard Cumin, ancestor of the Red Comyn, who fell by the hand of Bruce ; Robert de Quincy, who through marriage owned estates in Fife, and whose son, Sair de Quincy, 1st Earl of Winchester, was one of the twenty-five celebrated barons who were appointed to enforce the observance of Magna Charta ; and last on this list of notables comes Bernard son of Brien.

Apart, however, from the inference to be drawn from the royal charters, it is otherwise clear that Bernard son of Brien was a man of good birth, and one who knew who his ancestors were. This emerges from the fact that both he and his nephew, also called Bernard, in not less than six charters, refer to their 'ancestors and successors' - an expression which, though it is to be found in other deeds of the time, more particularly in deeds of mortification or bequests to religious houses, is not without significance.9

The question of Bernard's descent from a Danish source has been shown to be unfounded, and as regards the suggestion that he was of Anglo-Norman extraction no evidence has been found to substantiate it. It may, however, be mentioned that his father's name Brien was a common one in the family of the Counts of Brittany, who, though not Normans in the strict sense of the word, were nominally vassals of the Conqueror, and fought under his banner at Hastings. The dates associated with one of them, known as Brien Fitz-Count, a son of the head of that family, coincide closely with those of Bernard's father. This alone might count for little, but the facts that Margaret, a sister of King William the Lion, was the wife of Conon IV Duke of Brittany, and that Bernard was in that king’s retinue, and was given a manor by him, lend colour to the possibility of a connection with that nominally Norman family.

Recent DNA testing by Family Tree DNA of a number of Haldane males has revealed multiple families with this surname, each of which would have its own origin. No members of the Gleneagles Haldanes has been tested as of November 2008, but of the others tested, the Haplogroups I and R1b are prominent.10

Almer de Haldane later sided with King Robert the Bruce of Scotland during the Wars of Scottish Independence against the English. The Haldane territory soon increased greatly when Sir Simon de Haldane married Matilda de Arnot. Sir Simon had already received the lands of Bardrill in Strathearn in 1312 but the union also gave him control of more land in the Earldom of Lennox.

In 1482 Sir John Haldane, third of Gleneagles handed over lands in Perthshire, Stirlingshire and Fife to the Crown, turning this into the free barony of Gleneagles. Sir John was not intending to resign his property altogether as through his marriage to Agnes, daughter of Murdoch Menteith of Rusky he had a legitimate claim the earldom of Lennox. The title was contested between himself and John Stewart, Lord Darnley. The dispute appears to have come to a surprisingly amicable settlement for the time when, after a long legal battle Darnley retained the title and Sir John received a quarter of the lands.

Sir James Haldane was Governor of Dunbar Castle. His son was responsible for erecting lands in Lennox and Perthshire that were not already part of Gleneagles into the barony of Haldane in 1508. However his son was killed when the Clan Haldane fought at the Battle of Flodden Field in 1513, part of the Anglo-Scottish Wars.

In 1585 Stirling Castle was under siege by supporters of the Earl of Angus and many other Protestant noblemen. The Haldanes were part of the force calling for the repealing of the banishment of these nobles. The chief of Haldanes brother was killed in battle along with William Stuart, colonel of the Royal Guard. He was reportedly shot by Sir William's servant.

The eleventh Laird, Chief Sir John Haldane was knighted by King Charles I in 1633. However during the Civil War supporterd the Covenanters. He was killed when he led the clan at the Battle of Dunbar (1650).

Throughout the 18th century and the Jacobite Uprisings the Clan Haldane supported the British Government.

General George Haldane, son of the sixteenth Laird was a professional soldier who led the clan against the French at the Battle of Dettingen in 1743 and the Battle of Fontenoy in 1745.

General George Haldane also led the clan in fighting against the Jacobites. During the 1745 to 1746 Jacobite rebellion he served under the Duke of Cumberland.

GEORGE COCKBURN HALDANE, 18th of GLENEAGLES (b. 1729 - d. 02.03.1799) married Bethia DUNDAS in 1766 (mcrt. 06/09.05.1766) daughter of THOMAS DUNDAS of FINGASK AND CARRONHILL. George Cockburn was the only son of Charles Cockburn of Sandybed by his wife Margaret Haldane (second daughter of John Haldane, 14th of Gleneagles by his second wife Helen Erskine), upon his succession to GLENEAGLES he took the name HALDANE for life. George Cockburn HALDANE had one surviving child by his marriage to BETHIA DUNDAS.

The child was christened JANET COCKBURN HALDANE, and as sole heiress, was widely known as MISS HALDANE OF GLENEAGLES (see Sir WALTER SCOTT, 1822). She married at Edinburgh, on the 9 January 1801, Captain Charles Dallas, of the ancient House of Dallas of Cantray, Budgate, St. Martin's & North Newton, (b. 1766-d. 1855) later Brigadier-General and last British East India Governor of St. Helena. The marriage was productive of seven children - four boys and three girls, all of whom travelled to St. Helena with Brigadier General Dallas and his Lady, where they lived first at Plantation House and then at Longwood, Napoleon's residence. The eldest son, CAPTAIN THOMAS DALLAS of the Bengal Army (b.1801; drowned at sea 1857) took HALDANE, the surname of his mother and his maternal grandmother, for life, though he never succeeded to GLENEAGLES.

Upon the death of GEORGE COCKBURN HALDANE on 2 March 1799, the estate passed to his only son by his second marriage to MARGARET DRUMMOND, daughter of the 5th Viscount Strathallan. This son, GEORGE AUGUSTUS HALDANE, however, died unmarried on 26 October 1799, only months after the death of his father, the 18th of Gleneagles.

GLENEAGLES then passed to a cousin of the COCKBURN-HALDANE'S, not to CAPTAIN THOMAS DALLAS HALDANE, grandson of the 18th of GLENEAGLES and eldest son of JANET HALDANE OF GLENEAGLES and BRIGADIER-GENERAL DALLAS. DALLAS-HALDANE had changed his surname, in all probability, in anticipation of the inheritance. He was later drowned at sea. His cousin, who received GLENEAGLES, was Adam Duncan of Camperdown, son of HELEN HALDANE, younger sister of the aforementioned MARGARET HALDANE who married CHARLES COCKBURN.

HELEN HALDANE (d. May 1777) married Alexander Duncan of Lundie and their son, Adam, succeeded to Gleneagles on the death of his cousin, George Augustus Haldane, in 1799. ADAM DUNCAN sold a great portion of the estate to pay debts and so the Gleneagles estate, once very large and prominent, fell to the small size remaining today.

The famous Admiral Adam Duncan, Viscount Duncan of Camperdown, a cousin of the eighteenth Haldane of Gleneagles inherited the lands in 1820 and his son who inherited his title in 1831 also took the surname Haldane. The Gleneagles estates returned to a Haldane, James Chinnery-Haldane in 1918 when the fourth Earl of Camperdown gave over his rights to these lands. One of his sons Brodrick became a famous Portrait photographer, whilst his other son carried the chiefship until his death in 1994 when this passed to his nephew Martin.

The current chief of Clan Haldane is Martin Haldane of Gleneagles.