Lochaber
This article is about the ward management area in Scotland. For other uses, see Lochaber (disambiguation).

Lochaber (Scottish Gaelic Loch Abar) is one of the 16 ward management areas of the Highland Council of Scotland and one of eight former local government districts of the two-tier Highland region. There are also earlier senses of Lochaber as a district, and Parish, within the county of Inverness (Inverness-shire),[1] and the county of Argyll[2] - north of Loch Eil - and as simply a district of Scotland.[3] All senses of Lochaber refer to an area in the west of the Scottish Highlands

There is also a Ross, Skye and Lochaber constituency of the House of Commons of the Parliament of the United Kingdom (at Westminster), but its boundaries are not exactly those of the council corporate management area. The constituency was created in 2005 with boundaries based on those of wards in use during the period 1999 to 2007.

As statutory local government areas, the Highland region and its districts were created in 1975, under the Local Government (Scotland) Act 1973, and abolished in 1996. The 1973 legislation abolished local government counties and burghs throughout Scotland and created a new system of nine two-tier regions and three islands council areas. Each region consisted of a number of districts and the islands areas were created as unitary council areas.

The Lochaber district of the Highland region was created by merging the Ardnamurchan district and the Ballachulish and Kinlochleven electoral divisions of the former county of Argyll with the burgh of Fort William and the district of Lochaber of the former county of Inverness. Therefore the boundaries of the district included North Lorne, Glen Coe, Nether Lochaber, the western part of the Rannoch Moor, the Road to the Isles, Moidart, Ardgour, Morvern, Sunart, Ardnamurchan, and the Small Isles (Rùm, Eigg, Muck and Canna).

The 1994 legislation abolished regions and districts and established a system of 32 unitary council areas covering the whole of Scotland, and all of the Highland districts were merged into the new unitary Highland council area.

In 1996 the new Highland Council adopted the areas of the former districts as council management areas, and created area committees to represent them. The Lochaber management area then consisted of eight out of the 72 wards of the council area, each electing one councillor by the first past the post system of election. In 1999 ward boundaries were redrawn to create 80 new wards. Management area boundaries were not redrawn, however, and therefore area committees ceased to represent exactly the areas for which they were named and made decisions. The Lochaber committee continued to have eight members. The area manager throughout this period (1996–2007) was John Hutchison.

Lochaber used to be known as Abria[citation needed]. 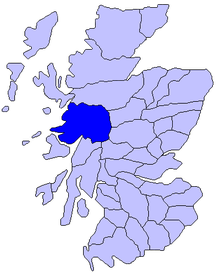 Map of Scotland showing the historic district of Lochaber 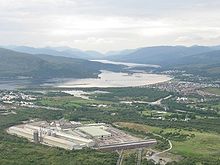