Jura (pronounced joor-a,  Scottish Gaelic: Diùra, pronounced [ˈtʲuːɾə]) is an island in the Inner Hebrides of Scotland, situated adjacent and to the north-east of Islay. Part of the island is designated as a National Scenic Area. Until the twentieth century Jura was dominated - and most of it was eventually owned - by the Campbell clan of Inveraray Castle on Loch Fyne. However, during the first half of the twentieth century the Campbells gradually sold the island as a number of separate estates.

Evidence of settlements on Jura dating from the Mesolithic period was first uncovered by the English archaeologist John Mercer in the 1960s. There is evidence of Neolithic man at Poll a' Cheo in the southwest of the island. The modern name "Jura" dates from the Norse-Gael era and is from the Old Norse Dyrøy meaning "deer island".[4]

In 1549, Donald Monro, Dean of the Isles wrote that the island was "ane ather fyne forrest for deire, inhabit and manurit at the coist syde", with "fresche water Loches, with meikell of profit" and an abundance of salmon.[5][Note 1] At this time Jura was in the hands of Clandonald of Kintyre, Clan Macfie of Colonsay, Maclean of Duart and Maclean of Lochbuie.[5] 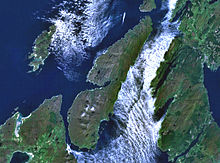 With an area of 36,692 hectares, or 142 square miles (368 km2), and only 188 inhabitants recorded in the 2001 census, Jura is much less densely populated than neighbouring Islay and is one of the least densely populated islands of Scotland.

The chief link to Jura is from the neighbouring island of Islay: a small car ferry operates across the Sound of Islay between Port Askaig on Islay and Feolin Ferry on Jura. In the summer there is also a passenger service between Craighouse and Tayvallich on the mainland. From Feolin Ferry a single track road follows the southern and eastern coastline of the island. To the north of Craighouse the road leads to Lagg, Tarbert, Ardlussa and beyond. A private track runs from the road end to the far north of the island.

The west coast of Jura has no permanent inhabitants, but is home to a number of raised beaches. Between the northern tip of Jura and the island of Scarba lies the Gulf of Corryvreckan where a whirlpool makes passage dangerous at certain states of the tide. The southern part of the island, from Loch Tarbert southwards, is one of 40 National Scenic Areas in Scotland.[7]

The Ardfin estate is situated at the southern tip of the island, between Feolin and Craighouse. It includes the 16-bedroom C-listed Jura House, whose famous and beautiful walled gardens benefit from a southerly aspect and the effects of the Gulf Stream. The gardens are home to exotic specimen plants from Australasia. These were, for some years, a popular tourist attraction on the island though they have been closed since a new owner acquired the estate in 2010. The estate also includes 16 kilometres (10 mi) miles of coastline and seven islands over a total of 4,692.3 hectares (11,595 acres).[8]. In November 2010 the Ardfin Estate was bought by Greg Coffey, an Australian hedge-fund manager.[9] He instructed that the gardens should be closed to the public, and ordered the disposal of all livestock from the estate farm. The ongoing closure of the gardens has become an increasing cause for concern among the island's residents.[10] In August 2011 Coffey visited his property for the first time since its acquisition.

The island has a large population of red deer and it is commonly believed that the name Jura was derived from hjǫrtr, the Old Norse word for deer. (In Old Norse dýr was a euphemism for hjǫrtr, as this was a sacred and tabooed word.) Much of the island is used for deer stalking, and visits by stalking parties have become a significant source of employment and a contributor to the island's economy.[11]

The deer prevent the island from tumbling back down to woodland, as was its former state; indeed, before the clearances and abundance of deer, the isle's name was thought to come from 'the great quantity of yew trees which grew in the island'.[12] 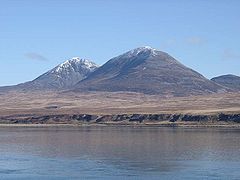 Two of the Paps of Jura taken from above Caol Ìla on Islay. 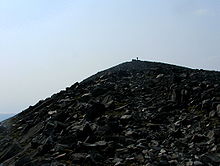 The scree-covered peak of Beinn an Òir 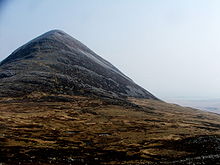 Beinn Shiantaidh from the south

The island is dominated by three steep-sided conical quartzite mountains on its western side – the Paps of Jura which rise to 785 metres (2,575 ft). There are three major peaks:

The Paps dominate the landscape in the region and can be seen from the Mull of Kintyre and, on a clear day, Skye and Northern Ireland. The route of the annual Isle of Jura Fell Race includes all three Paps and four other hills.

These hills were the subject of William McTaggart's 1902 masterpiece The Paps of Jura,[13] now displayed in the Kelvingrove Art Gallery and Museum.[14]

Like all inhabited Hebridean islands, Jura has its own indigenous tradition of Gaelic song and poetry.[15][16]

Towards the north end of Jura, some miles beyond the end of the metalled road, is Barnhill, a remote house where the novelist George Orwell spent much of the last three years of his life. Orwell was known to the residents of Jura by his real name, Eric Blair. It was at Barnhill that Orwell finished Nineteen Eighty-Four, during 1947–1948 while critically ill with tuberculosis.[17] He sent the final typescript to his publishers, Secker and Warburg, on 4 December 1948, who published the book on 8 June 1949.[18]

Apart from the connection with Orwell, Jura is also known for an event which took place on 23 August 1994, when Bill Drummond and Jimmy Cauty, known then as the music group The KLF, filmed themselves burning £1 million in banknotes in the Ardfin boathouse on the south coast of the island.[19]

Jura is featured in the plot of the 2003 novel A Question of Blood by Ian Rankin, the 2007 novel The Careful Use of Compliments by the Scottish writer Alexander McCall Smith and is a setting for some of the narrative and action in Anne Michaels' 2008 novel The Winter Vault.

The 2010 album 'Poets and Lighthouses' by Tuvan singer Albert Kuvezin of the band Yat Kha was recorded and produced by the British musician Giles Perring on Jura, with some of the performances being recorded in the forest at Lagg. The album reached Number 1 in the European World Music Charts in Jan 2011.[20]