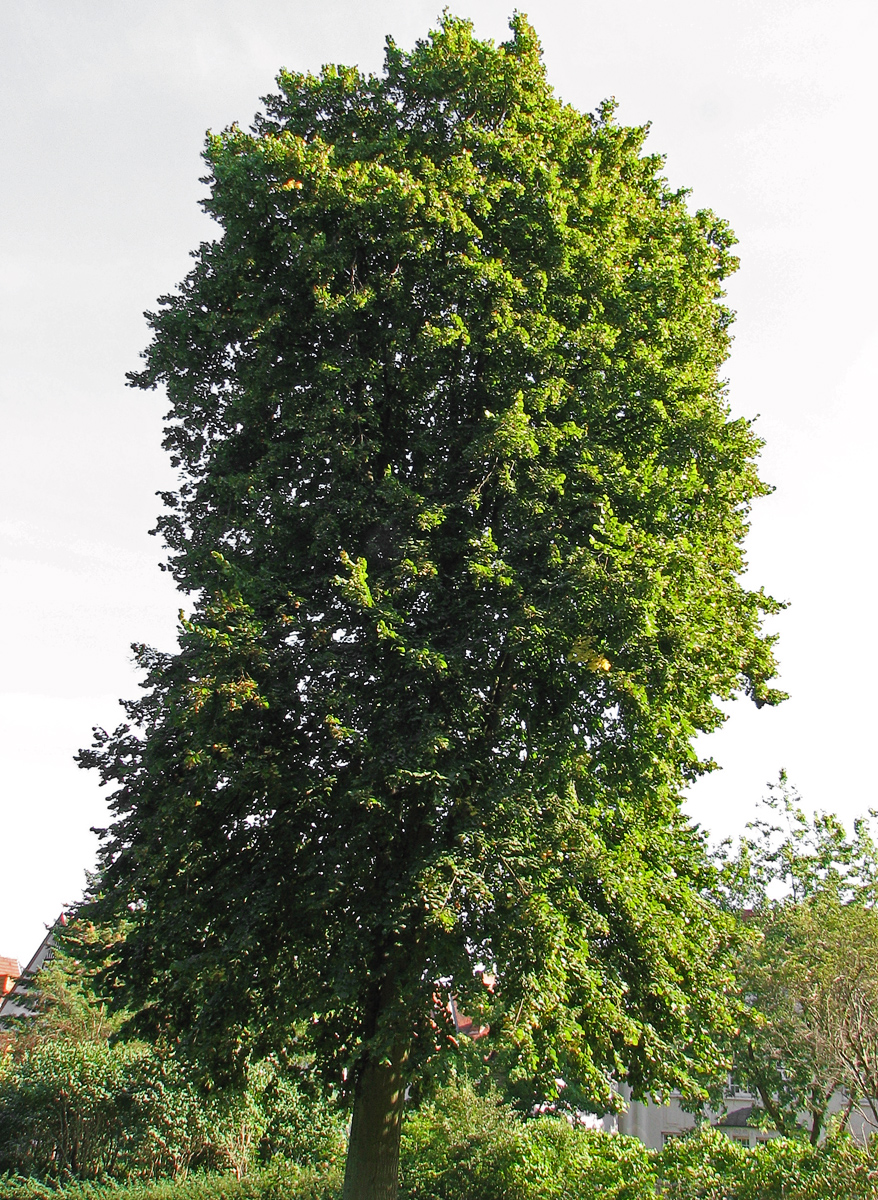 "Tilia" is a of about 30 species of s, native throughout most of the temperate , in (where the greatest species diversity is found), and eastern ; it is not native to western North America. Under the Cronquist classification system, this genus was placed in the family , but genetic research by the APG has resulted in the incorporation of this family into the . The trees are generally called lime in Britain and linden in parts of Europe and North America (where they are also known as basswood).

"Tilia" species are large trees, reaching typically 20&ndash;40 m tall, with oblique-cordate leaves 6&ndash;20 cm across, and are found through the north temperate regions. The exact number of species is subject to considerable uncertainty, as many or most of the species will hybridise readily, both in the wild and in cultivation.

"Linden" was originally the adjective, "made from lime-wood", from the late 16th century also used as a noun, probably influenced by translations of German romance, as an adoption of "Linden", the plural of German "Linde" ().Neither the name nor the tree is related to the citrus fruit called "lime" ("Citrus aurantifolia", family ). Another widely-used common name used in North America is Basswood, derived from "bast", the name for the inner bark (see Uses, below).

The following list comprises those most widely accepted species.

The Linden's sturdy trunk stands like a pillar and the branches divide and subdivide into numerous ramifications on which the spray is small and thick. In summer this is profusely clothed with large leaves and the result is a dense head of abundant foliage.

The leaves of all the lindens are one-sided, always heart-shaped, and the tiny fruit, looking like s, always hangs attached to a curious, ribbon-like, greenish yellow bract, whose use seems to be to launch the ripened seed-clusters just a little beyond the parent tree. The flowers of the European and American lindens are similar, except that the American bears a petal-like scale among its stamens and the European varieties are destitute of these appendages. All of the lindens may be propagated by cuttings and grafting as well as by seed. They grow rapidly in a rich soil, but are subject to the attacks of many insect enemies.

The Linden is to be recommended as an ornamental tree when a mass of foliage or a deep shade is desired. The tree produces fragrant and nectar-producing flowers, the medicinal lime blossom. They are very important plants for beekeepers, producing a very pale but richly flavoured . The flowers are also used for , and this infusion is particularly popular in Europe.

"T. cordata" is the preferred species for medical use, having a high concentration of active compounds. It is said to be a nervine, used by herbalists in treating restlessness, hysteria, and headaches. Usually, the double-flowered lindens are used to make perfumes. The leaf buds and young leaves are also edible raw. "Tilia" species are used as food plants by the e of some species; see "".

The of lime trees is soft, easily worked, and has very little grain, so it is a popular wood for model building and intricate carving. Ease of working and good acoustic properties also make it popular for and bass bodies and s such as recorders. It is also the wood of choice for the window-blinds and shutters industries. Real wood blinds are often made from this lightweight but strong and stable wood which is well suited to natural and stained finishes.

It is known in the trade as basswood, particularly in . This name originates from the inner fibrous bark of the tree, known as "bast" (). A very strong was obtained from this, by peeling off the bark and soaking in water for a month; after which the inner fibres can be easily separated. Bast obtained from the inside of the bark of the lime tree has been used by the of Japan to weave their traditional clothing, the .

In the percussion industry, basswood is sometimes used as a material for drum shells, both to enhance their sound and their aesthetics. Basswood is also frequently used as a material for and bass bodies. In the past, it was typically used (along with "") for favoured for less-expensive models. However, due to its better resonance at mid and high frequency, and better sustain than alder, it is now more commonly in use with s. It can also be used for the neck because of its excellent material integrity when bent and ability to produce consistent tone without any dead spots according to Parker Guitars.

Most medicinal research has focused on "" although other species are also used medicinally and somewhat interchangeably. The dried flowers are mildly sweet and sticky, and the fruit is somewhat sweet and mucilaginous. Limeflower tea has a pleasing taste, due to the aromatic volatile oil found in the flowers. The flowers, leaves, wood, and charcoal (obtained from the wood) are used for medicinal purposes. Active ingredients in the lime flowers include (which act as s), volatile oils, and mucilaginous constituents (which soothe and reduce inflammation). The plant also contains tannins that can act as an astringent.

In Europe, Lime trees are known to have reached ages measured in centuries, if not longer. A of "T. cordata" in in , for example, is estimated to be 2,000 years old. [http://www.forestry.gov.uk/forestry/infd-73egts] In the courtyard of the Imperial Castle at Nuremberg is a lime which tradition says was planted by the Empress Cunigunde, the wife of Henry II of Germany. This would make the tree about nine hundred years old (as of|1900|lc=on when it was described). It looks ancient and infirm, but in 1900 was sending forth thrifty leaves on its two or three remaining branches and was of course cared for tenderly. The famous Lime of Neustadt on the Kocher in Württemberg was computed to be one thousand years old when it fell.. The Alte Linde tree of Naters, Switzerland, is mentioned in a document in 1357 and described by the writer at that time as already "magnam" (huge). A plaque at its foot mentions that in 1155 a Lime tree was already on this spot.

* The excellence of the honey of far-famed was due to the lime trees that covered its sides and crowned its summit.
* The name of , the great botanist, was derived from a lime tree.
* "Tilia" appears in the tertiary formations of Grinnel Land in 82° north latitude, and in . Sapporta believed that he found there the common ancestor of the limes of Europe and America.

The lime tree is a of , , the and the ,Fact|date=February 2007 where it is called "lipa" (in Slovak, Polish, Sorbian, Bulgarian (липа), and Slovenian) and "lípa" (in Czech). The tree also has cultural and spiritual significance in Hungary, where it is called "hars"("fa").The n currency, "kuna", consists of 100 "lipa", also meaning "linden". The lime tree is also the tree of legend of the . In the Slavic Orthodox Christian world, limewood was the preferred wood for panel painting. The famous icons by the hand of , including the Holy Trinity (Hospitality of Abraham), and The Savior, now in the in , are painted on limewood. Limewood was chosen for its ability to be sanded very smooth, and for its resistance to warping once seasoned.

The national poet of Romania, , was known to receive poetic inspiration from a linden tree in the under which he would compose.

The tilia was also a highly symbolic and hallowed tree to the in their native pre-Christian .

Originally, local communities not only assembled to celebrate and dance under the lime-tree to hold their judicial thing meetings there in order to restore justice and peace. It was believed that the tree would help unearth the truth. Thus the tree became associated with even after , such as in the case of the "", and verdicts in rural Germany were frequently returned "sub tilia" (under the lime-tree) until the .

In the "", a medieval German work ultimately based on oral tradition recounting events amongst the Germanic tribes in the 5th and 6th centuries, gains his invulnerability by bathing in the blood of a dragon. While he did so, a single linden tree leaf sticks to him, leaving a spot on his body untouched by the blood and he thus has a single point of vulnerability.

, , , and Pliny mention the lime-tree and mention its virtues. As tells the old story of , she was changed into a linden and he into an when the time came for them both to die.

Herodotus says:quote|The Scythian diviners take also the leaf of the lime-tree, which, dividing into three parts, they twine round their fingers; they then unbind it and exercise the art to which they pretend.

As Freya was also the goddess of love her tree was always considered a romantic symbol, even to the present day. For instance, a very famous love poem by (c. 1170&ndash;c. 1230) starts with a reference to the lime-tree:

The linden tree is featured as a symbol of supernatural dread in Hannah Crafts' "".

A road lined with linden trees is cursed by the narrator of the famous censored poem, "Ich was ein chint so wolgetan" (I was such a lovely child), from the .

A poem from 's cycle of poems, "", is called "Der Lindenbaum." The cycle was later set to music by .

The linden tree is featured in Tolstoy's "."