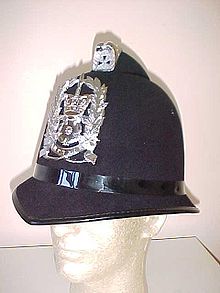 Crest-type custodian helmet; in this case with the Hampshire Constabulary's atypical badge

Custodian helmet or centurion helmet, technically known as a 'Home Office pattern helmet',[1] is a helmet worn by many policemen in England and Wales.

The custodian helmet is the traditional headgear of the "bobby on the beat", worn by male constables and sergeants on foot patrol in England and Wales (a peaked cap is worn by officers on mobile patrol in cars). Its design is based on the Pickelhaube. The vast majority of forces, with the notable exception of the Thames Valley Police presently utilise it as part of the everyday working dress. The helmet has been retained by most of the forces which have otherwise modernised the uniform. The custodian helmet is also worn by the British Transport Police and Ministry of Defence Police (in England and Wales only), the States of Jersey Police, the States of Guernsey Police Service, the Isle of Man Constabulary, the Royal Gibraltar Police, and the Bermuda Police. Special Constables formerly did not wear helmets, but most forces in England and Wales now issue them to male specials. The wearing of this style of helmet led Criminal Investigation Department personnel to call their uniformed colleagues "woodentops". The custodian helmet was adopted by the Metropolitan Police in 1863 to replace the top hat formerly worn, and other forces soon followed suit.

The helmet is traditionally made of cork covered outside by felt or serge-like material that matches the tunic. Inside, the brim is faced with a plain material and a leather headband adjusts the fit. The top of the helmet may have a comb and crest [1], a ball[2] or a simple helmet boss [2]. Of the 43 Home Office territorial forces in England and Wales, 21 currently use the comb style,[3] eighteen use the boss style,[4] and four use the ball style.[5] Some forces wore spikes on top of the helmet, although these have now been phased out.

The helmet is kept on by a thin chinstrap, though a more secure fitting was developed to keep the helmet on when it was used in riot control situations before specialist helmets were adopted. Some helmets have two chinstraps, a single strap for normal use and one with a double strap and chin cup, which can be folded up inside the helmet when not in use, for more strenuous activity. Many officers choose not to use the chin strap.

All forces except the City of London Police, Hampshire Constabulary and West Mercia Constabulary use the Brunswick star as the basis for their helmet plate. 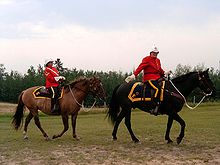 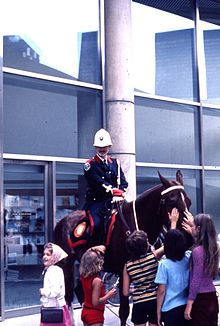 Helmets closely following the British model were widely worn by the police forces of Canada, Australia and New Zealand from the late nineteenth century on. These were eventually discarded as being inconvenient to wear when in vehicles or providing insufficient protection from the sun when on foot patrol. The New Zealand Police retained a white version until the 1990s. Toronto Police Service retains the white helmet used by Toronto Police Chief's Ceremonial Unit.

In modern production, hat makers take approximately 30 minutes to complete a single custodian helmet,[6] all of which are made by only four companies: Hobson and Sons (London) Ltd, Christys, of Stockport; Compton Webb (C.W. Headdress Limited), of Oxfordshire; and Helmets Limited, of Wheathampstead.[1]

The initial process begins with the making of the helmet shell using a vacuum forming machine and a metal mould. A sheet of black fortified plastic is heated and then lowered over the mould, where a vacuum pulls the plastic into shape over the mould. Once hardened instantly, a rubber mallet is used to release the plastic from the mould so that the excess plastic around brim of the helmet can be trimmed with a bandsaw and sanded. The helmet's fabric covers are made out of water-repellent wool that are cut in halves and stitched together to give the helmet a distinctive centred, front-to-back seam. Moving down the line of production, glue is applied to both the inside of the fabric cover and the outside surface of the helmet shell, the fabric cover is then steamed and stretched tightly over the shell to prevent buckling. A wooden tool is carefully used to smooth away any air bubbles as well as to ensure the fabric cover is in full contact with the helmet shell; excess fabric is cut away.

Now halfway through production, the helmet is left to dry for several minutes. Once it is dry, black rubber piping is sewn around the brim of the helmet to reinforce it and give it a neater edge. For boss and ball helmet styles, the metal fastening prongs of the chrome fixtures are dipped in chalk to mark their positions on the crown of the helmet; holes are then drilled and the fixture is secured. For comb-style helmets, the crest, which has vent holes incorporated into the design, is simply glued into place at the top end of the comb. For all helmet styles, two vent holes are punched on both sides of the helmet and fitted with black metal grommets, making a total of four vent holes.

The adjustable head harness is made out of strips of fabric tape and foam stitched onto a plastic headband; this is then inverted so that a modern-pattern chin-strap assembly and traditional leather chin-strip can be stitched on as well. The harness assembly is lowered into the helmet and secured with an industrial stapler. Depending on the helmet style, a broad plastic band [3], narrow black metal band [4], narrow chrome metal band [5], or broad chrome metal band [6][1] is wrapped around the helmet and pinned down, concealing the staples. For additional protection, a sponge liner is tucked in to the helmet.

Near the end of production, a hole is drilled on the front end of the helmet and an appropriate police helmet plate is screwed on. The helmet then is sized, cleaned, and inspected. At last, the helmet is labelled and given a good brush to bring up the pile. It is then now finally ready to be shipped on to an awaiting police force.

Use outside the Commonwealth 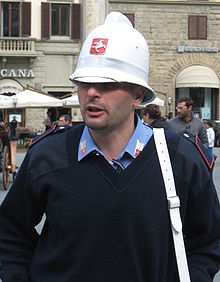 Until the mid-20th century, custodian helmets were in use with the municipal police forces of several Dutch cities, most notably The Hague.[7][8]

Some early uniforms of the Pennsylvania State Police incorporated a cloth covered helmet, manufactured in England.